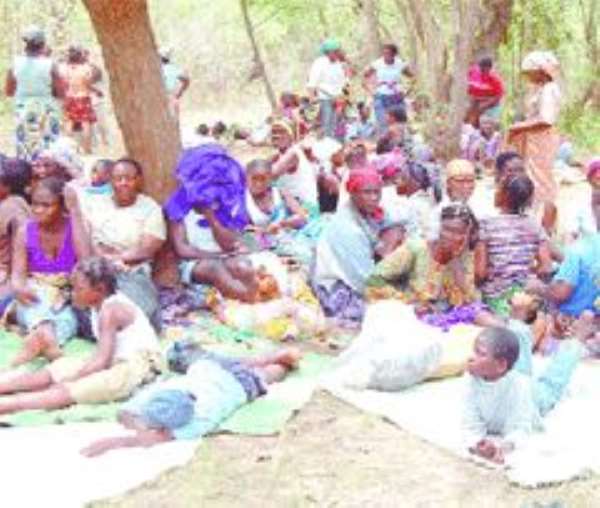 Ghanaian Security Agencies yesterday carried out a special exercise at the Buduburam Refugee Settlement, near the national capital, to arrest Liberian refugees for continuing with their illegal demonstration.

More than 200 people made up of women and children who were demonstrating in violation of the Public Order Act (Act 491) were picked during a dawn operation and taken to the Kordiabe Youth Leadership Centre in the Eastern Region for processing after which their refugee status will be revoked.


The refugees began their demonstration on February 19, 2008, demanding, among other things, that they did not wish to remain in Ghana to be integrated into the Ghanaian society.


They rather wanted resettlement in a Western country and $1,000 to be paid to each of them opting to voluntarily repatriate. They had since been mobilising the elderly, women and children to demonstrate in support of a petition they submitted to the UNHCR in Geneva to that effect.


According to the Director of Police Public Affair, DSP Kwesi Ofori, the objective of the exercise was to stop further infringement of the Public Order Act.


He said it was also to end the lawlessness and chaos that had engulfed the camp where children were prevented from attending school leading to the closure of the schools and preventing the aged and those who were in dire need of medical attention from being taken care of.

DSP Ofori said the demonstration by the refugees also led to a continuous traffic jam on the Accra-Cape Coast road, thus making it impossible for traders and other road users to get to their destination on time.


The director said the police were not acting unilaterally but in collaboration with the Ministry of the Interior, the United Nations High Commissioner for Refugees (UNHCR), the Refugees Board and NADMO.


DSP Ofori asked the refugees to respect the laws of the land and make sure they co-operated with all other stakeholders and warned that the police would not tolerate any acts that would compromise the laws of Ghana.


In a release issued in Accra yesterday, Interior Minister Kwamena Bartels, said the government would not countenance such unruly behaviour by refugees who had been given hospitality by the country for 18 years. and has directed the security agencies to hold the refugees at the centre.

He said the government intended to return all the arrested persons to Liberia particularly so because the war in Liberia had ended.


The minister, at a meeting with representatives of the refugees, the UNHCR and the security agencies in Accra last Tuesday, described the demonstration as illegal and a breach of the Public Order Act of 1994.


He said the government viewed the demonstration as a breech of the goodwill extended to the refugees by the Government and the people of Ghana in their time of need.


Mr Bartels, therefore, warned that the government would use the full rigours of the law to deal with the issue should the refugees persist in the illegal action which had been ongoing for 26 days.


He announced that the government had initiated a consultative process with other stakeholders to invoke the Cessation Clause for Liberian Refugees under the International Refugee Convention, adding that “there must be an end to the protracted Liberian refugee situation”.


He indicated that the demands of the refugees were very misplaced and without merit and said the government had not taken any decision to locally reintegrate Liberian refugees and that it had no intention of doing so.


“Besides, nobody is holding any refugee hostage and so they are free to leave the country,” he added.