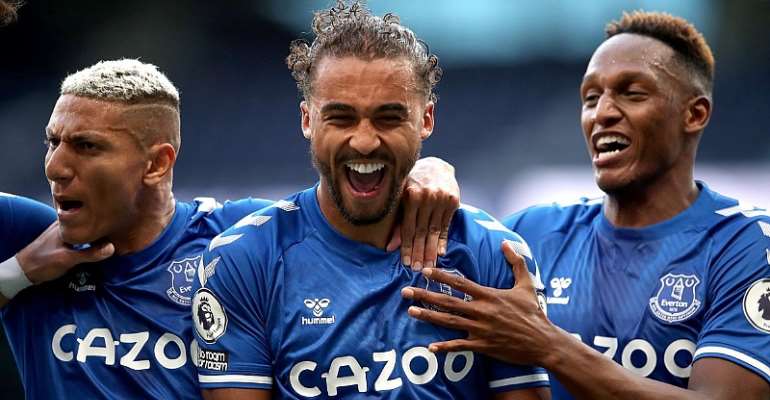 Dominic Calvert-Lewin headed the winner as Everton eased past lacklustre Tottenham 1-0 to kick-start their Premier League campaign with three points.

The Toffees made a bright opening and looked comfortable with a midfield packed with impressive debutants James Rodriguez, Abdoulaye Doucoure and Allan.

And they were almost rewarded when Richarlison latched on to a sloppy backpass by Ben Davies, rounded Hugo Lloris before shanking over an open goal.

Spurs eventually grew into the game and both Dele Alli and debutant Matt Doherty forced smart saves from Jordan Pickford, but there was little to separate the two sides as they went in goalless at the interval.

Carlo Ancelotti’s side continued to impress in the second half and took a deserved lead when Lucas Digne curved a magnificent ball, met by the leaping Dominic Calvert-Lewin who powered a header past Hugo Lloris.

Mourinho’s men looked lifeless and bereft of ideas and failed to create a single clear chance in the second half as Everton continued to press.

Richarlison spurned three chances to kill the game but his wayward finishing will be forgiven by his teammates as they coasted to their first win over Spurs since 2012 and their first away a win at a ‘big six’ side since 2013.

Mourinho, meanwhile, must reflect on why his side showed so little in their first match of the season.