“I had to pretend to faint to stop being beaten”, Diadem opens up about being in an abusive relationship. 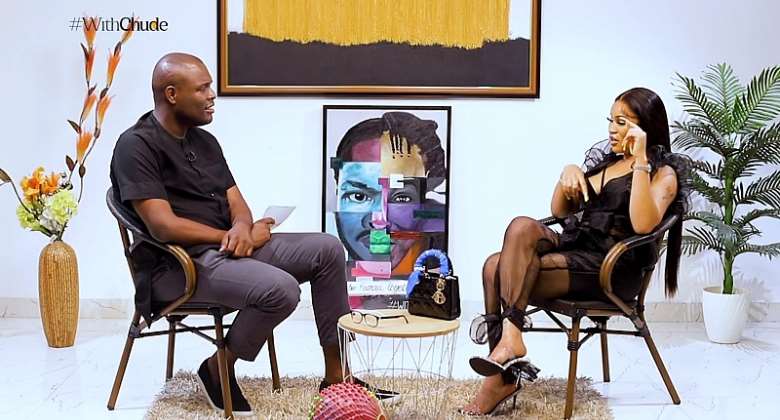 Beauty Influencer, Adeola ‘Diadem’ Adeyemi sits with Chude Jideonwo, on #WithChude to discuss being with an abusive fiancé, having an absent mother and the celebrity who made her leave makeup.

On dealing with abuse she said, “Before I got pregnant, I started seeing the signs, the way he would talk to his maids, the way he would shout at people. I saw the signs, but I felt he loved me so much he won’t do that to me. I’m very spoilt when I’m in a relationship, I like to be ‘babied’. When I got pregnant, the whole thing just changed. Two weeks to my introduction, I knew in my heart that I wasn’t going to marry him. I proceeded because the world has seen my baby bump, and they’ll judge me for it.

Diadem also shared how the relationship got toxic and made her decide against the wedding, “his father wanted us to do a court wedding once and for all, but I insisted on giving birth first. I had to use the pregnancy to stall them because I already knew in my mind that I would not marry him. I knew what I went through; it was not a joke. Even after I left, the people that saw me knew what I went through. I had to pretend to faint to stop being beaten. I had to leave because of my daughter. My daughter was two weeks old and at that time, I was still bleeding from childbirth when it happened. The beating had started when I was six weeks pregnant; I was just guiding my tummy because I didn’t want to lose the baby. ‘Even if I want to cheat on you, will I cheat on you with a big belly?, how is that even possible? He would hack into my WhatsApp trying to know whom I was talking to”

On the incident that made her leave makeup, she said, “that story, anytime I tell it, it breaks my heart. My first vision was to be a make-up artist, I trained to be a makeup artist in 2013. A few months after I trained, I went out with a friend that had a shoot. On getting to the location, the make-up artist they called was not available, I think she disappointed them. So, they were looking for an urgent makeup artist that could do something quickly. He came to me, and he said, ‘since you just trained, come and do this thing’.

Diadem mentioned that although she was scared, her friend met the director, showing the director her instructor's work. She later met with the celebrity who later embarrassed her because she was in a hurry to go somewhere, “I had not started before she started slapping my hands, she embarrassed me in front of everybody. After she left, I cried my eyes out, I was so down. That was when I decided that I wasn’t doing makeup anymore. For every time I tried to do makeup, that scene just flashes back, I just couldn’t”.

“I was just starting, the littlest thing you could have just done was to encourage me. Even where I am today, I work with a lot of makeup artist, I will rather help them improve their crafts than bring them down”, she added.

She also mentioned growing up without her mum, “I started fending for myself since I was 14. I didn’t grow up with my mom, I didn’t know my mom till I was 13. My dad is a man of many wives, many children, all man for himself. There was a time that my sister almost took her life. The first time I went to Ibadan was when I ran away from home. I went to sell pure water under the bridge.”

“Till date, I don't know what happened between my mom and dad, because when I had my daughter, I wanted to speak to my mother to know what really went wrong, so I started looking for her. I told my dad to go and look for her for me. He went there and said he could not find her. A friend of mine on Snapchat, who was asking me out, asked where I was from. I told him I’m an Igbo girl, but I don't know my mother's side. He asked a picture, and I sent him the picture I had then.’ This guy printed flyers for me and pasted it around Oguta. One way or the other, somebody found her. When they called me that they had found her, I insisted it was impossible. Unfortunately, she was already down with stroke. They brought her down to Lagos, but she couldn’t talk. She was with us for a while, and we did everything, but it was not easy. I had to tell them to take her back and one year later, she passed. It’s life. Sometimes, I get jealous of my friend because she is really close to her mum. When I see the kind of bond that they share, I am just like why can’t I have that? And when I had my daughter, the way I love my child I can’t even leave her for a second”, she shared.

#WithChude is a network of media products across TV, film and podcasts telling stories that enable and strengthen the mind, the heart, and the spirit. The weekly interviews are widely syndicated across terrestrial television and social media platforms reaching an average of 8 million people weekly - positioning it as the most watched and most syndicated weekly talk show (digital + traditional) in the region. It has become a safe space for guests to talk about things publicly for the first time. Actor Joke Silva revealed that her husband Olu Jacobs was dealing with dementia with Lewy body for the first time on the show, and producer Kemi Afolabi opened up about her experience dealing with Lupus on #WithChude. That month, Lupus and Kemi Afolabi were among the top Google Nigeria searches. The interviews have been featured everywhere, from the BBC to the New York Times. The documentary and travelogue series #ChudeExplains has tackled issues from criminal justice reform to Gen Z coming of age. The show launches the #WithChude Global series in 2023.

India's sinking hill town, a casualty of the warming Himalay...
43 minutes ago