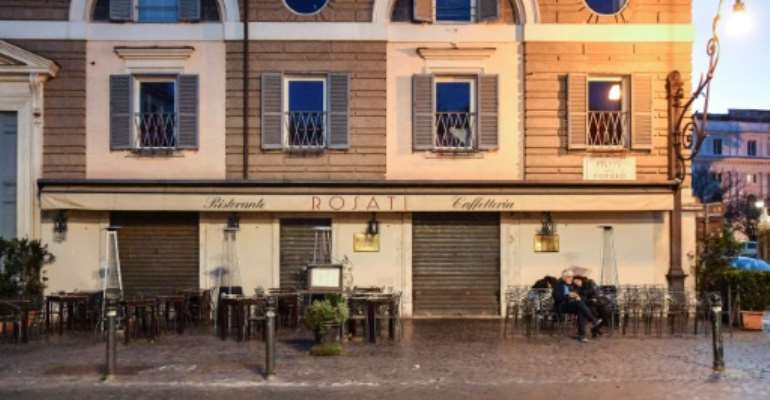 Italy is the hardest-hit country in Europe. By Tiziana FABI (AFP)

Italy has recorded its deadliest day of the coronavirus crisis despite locking down the entire country, as New York deployed the National Guard to contain a disease that has sown worldwide panic.

The hardest-hit country in Europe said its death toll from the COVID-19 virus had risen Tuesday by a third to 631, with the surging epidemic taking its toll on global sporting, cultural and political events.

While authorities in China, where the outbreak began, have declared it "basically curbed", cases are multiplying around the world, sparking panic buying in shops, and wild swings on financial markets.

The virus is infecting all walks of life, including politics, with US Democratic presidential hopefuls Bernie Sanders and Joe Biden both cancelling campaign rallies and British health minister Nadine Dorries saying she had tested positive.

And amid criticism of the US authorities' response, New York deployed the National Guard for the first time during the crisis to help contain the spread of the disease from an infection-hit suburb. 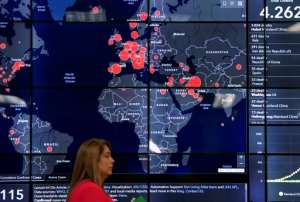 The virus has infected more than 100 countries. By Luis ACOSTA (AFP)

There have been 173 confirmed cases in New York state, including 108 in Westchester County, home to New Rochelle where the majority of infections have been detected.

"It is a dramatic action, but it is the largest cluster in the country. This is literally a matter of life and death," said state governor Andrew Cuomo.

"People are scared, it's an unusual situation to be in," Miles Goldberg, who runs a New Rochelle bar, told AFP.

In an unprecedented move, Italian Prime Minister Giuseppe Conte has told the 60 million residents of his country they should travel only for the most urgent work or health reasons. 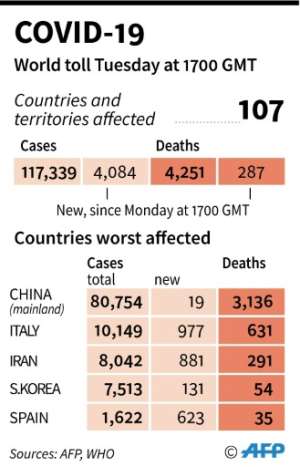 The virus is spreading rapidly. By Simon MALFATTO (AFP)

And while squares in Milan and Rome were emptied of their usual bustle and traffic, some residents appeared uncertain if they were even allowed to leave their homes for everyday tasks like shopping.

The virus has battered tourism around the world, as people scrap travel plans, and a restaurant owner in Florence in northern Italy said that the impact on business had been catastrophic.

"We hope that we will see the end of it, because from around 140 covers a day, this afternoon, we've gone down to 20-25," Agostino Ferrara told AFP.

Pope Francis also seemed to muddy the waters, holding a mass in which he urged priests to go out and visit the sick -- something Conte has specifically discouraged.

Arsenal's game at Manchester City was postponed after players from the London club were put into quarantine, making it the first Premier League fixture to be called off because of the virus.

The virus has sparked doubts about the Olympics due to open in Tokyo on July 24 and the traditional flame lighting ceremony in Greece is set to be held without spectators.

In the United States, organisers rescheduled the two-week Coachella music festival for October.

'Winding up a rubber band'

The virus and the response to the crisis has prompted pandemonium on global markets with volatility not seen since the world financial crisis in 2008.

After suffering its worst session in more than 11 years at the beginning of the week, the Dow Jones Index in New York bounced back significantly, rising five percent on Tuesday.

Politicians around the world have scrambled to put together emergency packages to ease the significant financial hardships the virus is expected to cause for households and businesses. 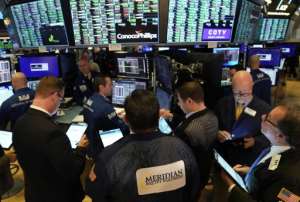 The virus has sparked chaos on financial markets. By TIMOTHY A. CLARY (AFP)

US President Donald Trump, who is relying on a strong economy to boost his re-election hopes, promised to announce "major" economic measures on Tuesday.

The biggest item on his wish list is a cut in payroll taxes. But even allies in Congress and reportedly some aides in the White House are sceptical, questioning the cost.

Italy prepared Tuesday to let families skip mortgage and some tax payments while Japan unveiled a second emergency package to tackle economic woes stemming from the outbreak, including $15 billion in loan programmes to support small businesses.

Analysts warned of further volatility ahead however.

"It's like winding up a rubber band. The more you wind it, when you let go, the more it pops," said LBBW's Karl Haeling.

"A lot of the uncertainty goes to the root of the virus itself."