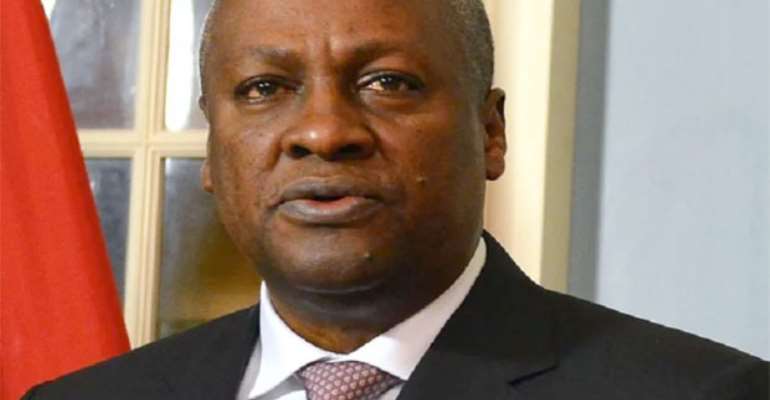 Let us face it, the scumbags are well prepared, and routinely carry out their illegal activities with military precisions, and can strike as lighting, and as deadly and destructive as molten magma.

In theory, the illegal miners' invasion of our countryside with a view to forcibly digging our mineral resources, polluting our sources of drinking water, destroying the environment and above all terrorising the natives is tantamount to war.

Even though the small-scale mining laws prohibit the use of large explosives, the foreign illegal miners are revoltingly using unstructured methods, and at the same time supplying large explosive, rock crushers and other machines to local miners. How pathetic?

As a result of the involvement of the obdurate foreign illegal miners, the dynamics of small-scale mining has somehow changed.

So, it was, indeed, extremely baffling to see former President Mahama criticising President Akufo-Addo over his efforts to curb the illegal mining.

Take, for example, the World Health Organisation (WHO) asserts that exposure to mercury – even small amounts – may cause serious health problems and it is a threat to the development of the child in utero and early in life (WHO 2017).

There is no gainsaying the fact that mephitic mercury use in artisanal and small-scale gold mining is extremely harmful and its health effects on society are significantly worrying (WHO, 2017).

It is estimated that about 15% of the world’s gold is produced by artisanal and small-scale miners, many of whom use mercury and other toxic substances to extract the minerals from rivers and underneath the ground (BBC, 2013).

“Unlike some other West African countries, Ghana allows mercury use in mining. Mercury is freely available in shops and can be bought with a canister, bottle, or as a ball wrapped in a plastic cling film, and much of it has been brought in by Chinese miners.

“Ghana has an estimated one million small-scale gold miners (galamseyers), and they commonly use mercury to process gold.

“The problems stemming from mercury use don't stop at exposure from inhalation. Once used for gold processing, mercury-contaminated water is often dumped on the ground, polluting Ghana's rivers and lakes, and poisoning its fish and those who eat them (HRW, 2014).”

Many years passed without no one realising that the fish were contaminated with mercury, and that it was causing a strange disease in the local community and in other districts.

It was reported that at least 50, 000 people were affected to some extent and more than 2000 cases of Minamata disease were identified.

“Minamata disease, also known as Chisso-Minamata disease, is a neurological syndrome caused by severe mercury poisoning. Symptoms include ataxia, numbness in the hands and feet, general muscle weakness, narrowing of the field of vision and damage to hearing and speech. In extreme cases, insanity, paralysis, coma and death follow within weeks of the onset of symptoms. A congenital form of the disease can also affect foetuses” (See: www.bu.edu/sustainability/minamata-disease).

As part of the prevailing predicament, mercury poisoning involves the condition instigated by exposure at an accelerated dosage which could augment fatalhealth effects on communities.

It has been identified that exposure to mercury could crystallise in several ways, including inter alia, dental amalgam fillingsand the consumption of contaminated sea food, and more importantly, the dangers of mercury exposure can happen in and outside of built environments. As a result, most individuals are mainly exposed to methyl mercury, an organic compound when they consume fish containing methyl mercury (Merem, Wesley, Isokpehiet al. 2016).

Methylmercury also biomagnifies. For example, large predatory fish are more likely to have high levels of mercury as a result of eating many smaller fish that have acquired mercury through ingestion of plankton.

People may be exposed to mercury in any of its forms under different circumstances. However, exposure mainly occurs through consumption of fish and shellfish contaminated with methylmercury and through worker inhalation of elemental mercury vapours during industrial processes (WHO, 2017).

In sum, given the extreme dangers associated with illegal mining, former President Mahama was absolutely wrong in criticising President Akufo-Addo for doing everything possible to halt the repulsive activities of the illegal miners.