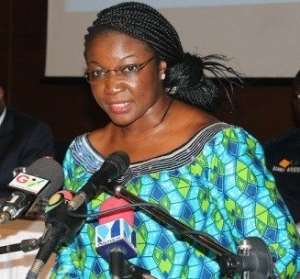 Yesterday, I knew you were going to speak on eye-witness news with Sanda Amadu. Unfortunately for me, I couldn't monitor the discussion. The news portal beautifully made a transcription of every single thing you said on the show. Let me not digress at this juncture because.

Sister Joyce, when president Akufo Addo had his media encounter on Friday, 13th December 2019 you alleged that the encounter was staged. According to unimpeachable sources, few hours after the said statement from your end, you became a subject of public backlash and attack for insulting the intelligence of the media men who gathered at the flagstaff house.

One thing that did catch my attention in your presentation is in respect of the fact that you used eye-witness news to cast serious unfounded aspersion on the very Ghanaians who angrily voted out John Mahama in 2016 because of his bloodsucking style of governance.

You said that Ghanaians have regretted voting out Mr John Mahama because the recent tour you went proves this claim on the back of purported severe despair they are going through in their homes.

The direct meaning of what you decided to put out yesterday gives any reasonable person the impression that Ghanaians didn't know what they were bringing onto themselves when they took a firm decision to impeach Mahama at the polls in 2016. In fact according to you, if they knew, they wouldn't have been hard on John Mahama.

This you refer to us "despondency" as a description of the current state of the good people of Ghana. If this is not the highest form of insult on the intelligence of Ghanaians, then I do not know what else constitute pejorative remarks on this planet.

If you have forgotten, let me remind you that, if Ghanaians had not voted out the NDC and John Mahama in 2016, free SHS which is benefitting every household wouldn't have been a reality today. It would have been a perfect mirage.

Again, Ghanaians rejected JDM in 2016 because of load shedding which brought the economy on its knees. The" despondency "you referred to was actually in full force when poor parents couldn't afford secondary education for their kids under JM and NDC.

Ghanaians wanted economic emancipation which your senseless government failed to give them. Your wicked government told us, matching to "Senchi" was only for homegrown policies when in actual fact, documents were going to be prepared to "hand us over to IMF" for policy credibility and directions.

Today, an amount of GHC 30m is able to sponsor 300,000 Ghanaian students who are pursuing various degrees in our tertiary institutions. These students were selected from the various constituencies across the country. Under your tenure, an amount of Ghc 51.2m was rather paid to Woyome because he financed Mills and Mahama campaign in 2008.

Ghanaians voted out JDM to pave way for economic prosperity which they are enjoying today. Ekumfi has a pineapple factory as we speak, the very town Professor Mills came from is a direct beneficiary of Akufo Addo's one district one factory. Joyce Bawa Mogtari kindly goes to Ekumfi and check how the people are seriously benefitting from the pineapple factory.

Politics must not in any way be substituted for dishonesty. John Mahama was a bad candidate in 2016 and continues to be same going into 2020. John Mahama is not a new person to us and that is what those clamouring for his come back must know. He has nothing good to offer in so far as governance is concerned.

This alternative is not credible. The umbrella which seeks to provide shelter for John Mahama's disgraceful second attempt is perforated. John Mahama is a walking" dumsor". The alternative we are told to choose in 2020 is a complete tsunami.

#Ghanaians did not only vote out JDM, they instead voted out dumsor#

No return to Egypt