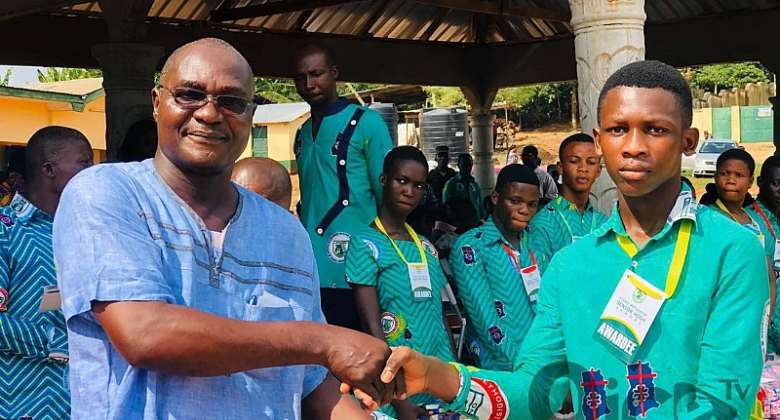 Oyoko Methodist Senior High School during the weekend celebrated its second Speech and Prize Giving Day at oyoko in Koforidua in the Eastern Region.

The colourful event, which was held under the theme, "Quality Education: the Role of Stakeholders” brought together past and present students.

The event began with the inspection of the school’s Cadet Corp by the Board Chairman, Chairman for the occasion, Headmaster, as the Guest Speaker.

The chairman for the occasion Mr. Michael Okyere Baafi, Chief executive Officer of Ghana Free Zones Board in his address, reiterated that the Speech and Prize Giving Day is a time to take stock, reflect on the school’s challenges achievements, honour those who have assisted the school’s activities and recognise students who have excelled in various subject areas and disciplines to serve as encouragement for others.

Over 40 students were awarded in both academics and sports , teachers and non teaching staffs were also awarded with goodies for their hard working towards the development of oyoko Methodist senior high school (omess).

Mr Michael Baafi made a donation of 100 bags of cement and promised 5 laptops for the school’s administration.

The guest speaker, Mr. Emmanuel Acquaye, an educationist advised the students that “to be relevant, you must first strive to excel in the little things that you do so that greater things can be bestowed on you”.

The Headmaster of the school, Mr. Frank Inkum Eyiah in his report recounted that the school continues to make giant strides in second cycle education for both academics and sports in the country.

More from Education
ModernGhana Links
Rename UHAS as “John Atta Mills University of Health and Allied Sciences” — Vice Chancellor
Students have been attacked, wounded with knives but no one has been killed – UCC SRC President
Address our concern or witness the mother of all industrial action – Labour Unions in public Universities warn gov’t
TOP STORIES