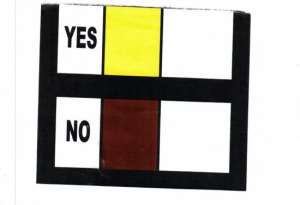 We were going to have another referendum which was going to pave way for multiparty representation at the local level(LOCAL GOVERNANCE). This exercise was going to take away the bottlenecks at the local level which have been in existence for so many years. My deep worry has nothing to do with the abortive posture that greeted this policy from the onset.

My deepest worry is in respect of the fact that, we failed to get consensus as citizens. This exercise which has been cancelled as we are told, has in the few weeks generated alot of topsy turvy on our public discourse. Friends have had reasons to stand on different lines particularly on the need to allow partisanship take its full force and effect at the local level. The policy, if not because of its untimely abortion ,was going to repeal the intention behind the framers of article 55(3) of the 1992 constitution of the Republic of Ghana.

The extreme objection that greeted this exercise was canvassed by some people through social media. They argued so well and whipped emotions out of this and got the support of the majority who at the time had little knowledge of the details of the proposed referendum.

They submitted that, the kind of partisan politics which has taken a center stage at the National Level defeats the purpose of the Referendum. Some of them said," the politics at the national level has become counter productive and so transferring same to the local level is going to sink the sanctity of local governance we have enjoyed so far.

One thing we couldn't do was that, we failed to put on our discourse, the spirit of article 55(3) which inter alia underscores the intention behind the framers of the law. We didn't subject the intention to litmus test to ascertain whether or not the framer's intendment was to block the transmission of National partisan Representation from getting into contact with our Local Representation.

Chapter seven of the 1992 constitution of the Republic of Ghana brings to mind issues we need to consider. They are (a) Why did the framers allow political parties to sponsor candidates to represent them at the National level but prohibited the extension of same at the local level? (b)What at all informed their decision in this regard? (d) Did the framers adopt the omnibus principle of reasonable foreseeability test?

If indeed, reasonable forseeability test was applied when the framers crafted article 55(3), the very fundamental basis relied upon by those who vehemently kicked against this exercise would have been realized and so wouldn't have allowed the inclusion of partisan politics at the national level and restrict same inclusion by exclusive prohibition.

Because, Majority of Ghanaians knew nothing about this referendum, the campaigners for "NO" took advantage of peoples gullibilty and exploited their ignorance and got their support. It is worthy of note that, no referendum would thrive where there is no absolute consensus. No wonder this exercise has been sunk in "jurisdictional waters"

The NCCE whose mandate is to give Ghanaians civic education which includes the right to participate in any National election failed to embark on its mandate(s) as a constitutional organization.

If NCCE had done their work well, we would have reached a bipartisan consensus for the sake of bringing this exercise into fruition. The government would have been spared this unpopular intervention which has resulted in outright cancellation of the scheduled exercise.

To avoid the catastrophic 2008 defeat, refrain from publicly...
2 hours ago

Our economic woes due to the historic poor Akufo-Addo’s lead...
2 hours ago