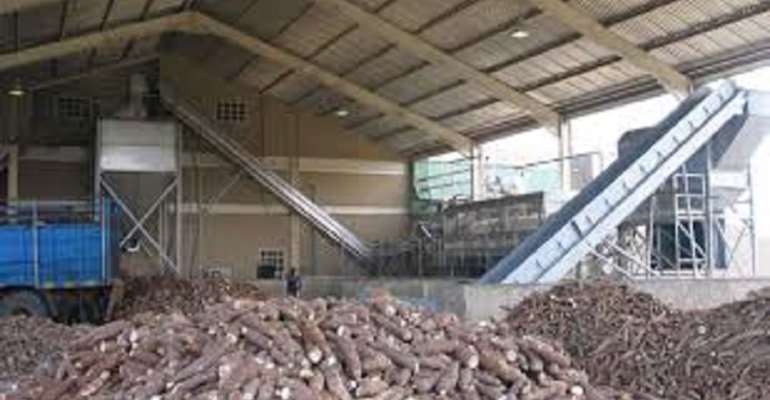 The District Chief Executive of West Gonja, hon. Saeed Muhazu Jibreal has revealed that the West Gonja District will be given a $50,000 Cassava Processing Factory as part of the One District, One Factory flagship program being implemented by government.

In response to a question from a blogger/freelance journalist, Mr. Ananpansah B Abraham on the progress of work on the IDIF in the district at a meet the press series, he said 50 out of 189 applicants are to be selected to own and manage the factory.

According to him, the delay in the implementation of the program in the district is as a result of the lack of investors,adding that, the district has eventually been chosen to benefit from a $50k African Development Bank IDIF project.

"Under the IDIF, every district was tasked to send a proposal to the central government to sell to prospective investors. But unfortunately, we haven't had an investor because of where we are....We put forward a Cassava processing Factory to process gari, starch and many other products...What we did was to resend the proposal and God is on our side, about three months ago,I was called to Kumasi to attend a workshop under the African Development Bank. West Gonja has been chosen as one of the beneficiaries of a $50,000 IDIF under the Ministry of Special Development Initiative," he said.

Under the One Village, One Dam initiative, he disclosed that dams have been constructed in the Kpiri, Mognori, Murugu and Laribanga communities.

He further stated that he has become aware of the broken down bridge under the IVID at Kpiri and that,the situation has been reported to feeder roads to ensure that a proper bridge is constructed for the people.He said the contractor has also been instructed to reconstruct the dam.

On electricity extension,he said his administration has extended electricity to some communities in the district and that,effort is being made to connect more communities, including Canteen New Town and Frafra settlements to the National Grid.

A total of 6,225 farmers in the district he said, were supported with subsidized agric inputs from 2017 to 2019 under the Planting for Food and Jobs (PFJ) initiative, whilst 25,000 certified improved cashew seedlings have been distributed to 446 farmers alongside with capacity building under government's Planting for Export and Rural Development programme.

As part of effort to reduce graduate and youth unemployment, he disclosed that, the National Builders Corps(NABCO) has since its inception in 2018, recruited a total of 409 graduates. The Youth Employment Agency,its twin sister from avaliable records, has recruited 453 young people under its various modules from 2017 to 2019.

Throwing light on the implementation of the Free SHS program in the district, he said so far,Ghc724,222.3 has been disbursed to cater for 2,527 students. The implementation of the LEAP programme has also seen a total amount of Ghc2,580,484 disbursed to cater for 11,347 beneficiary households, whilst 101 schools have been covered under the School Feeding Programme from 2016/2017 academic year to 2018/2019 academic year.

The District Coordinating Director, Mr. Petro Philimon in a welcome address indicated that the meet the press which is a directive from the Minister of Local Government is aimed at disseminating government information and to receive feedback from citizens at the district level.

He reiterated that the initiative which is first of its kind in the district, will go a long way to deepen democracy at the periphery through dialogue and accountability.

The common agenda of the district assembly in his view is to eradicate poverty, diseases and hunger from the district.

Present also were: the District Police Commander, chiefs and opinion leaders, heads of institutions, students and the media.