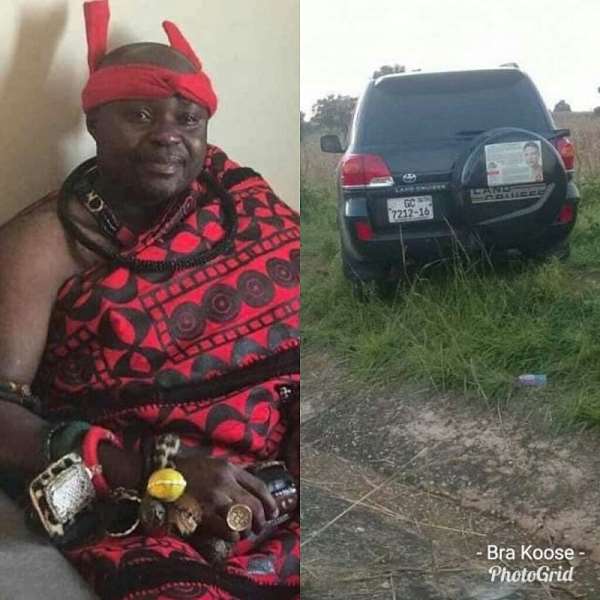 Some family members of the late Otumfour’s Asamponhene Nana Kwadwo Afordour, yesterday besieged the Asokore Mampong district court to invoke the powers of their ancestral gods on the suspect and his Counsel.

Our reporter who at the court reported that some family members who wore black mourning clothes also requested their gods to strike dead anyone involved in the killing of beloved their relative.

The body of the Nana Kwadwo Afordour 46, was found last Sunday, August 18, 2019 in his Toyota Land Cruiser vehicle, which was abandoned near Abuom, a village on the Ejura- Nkoranza road.

Anumwar Sadat Mohammed who has been charged with murder was arrested in Ouagadougou, Burkina Faso after six others were initially arrested over the crime.

The prosecution prayed the court not to grant the suspect bail since they are yet to complete their investigations on the matter.

The court, therefore remanded the suspect in prison custody to reappear on November 14, 2019 as the prosecution prayed for more time to enable them complete their investigations.

Prosecutor, Inspector Edward Kwame Adade told the court that the suspect might tamper with investigations if he is granted bail.

Inspector Edward Kwame Adade said “We haven’t been able to conclude our investigations. It is a first degree felony [and] the duplicate docket must be taken to the Attorney General for advice. Initially, he was in our (Police) custody but today I prayed that the court remand him into prison custody. Initially, he was co-operating with us, but now he is not. So for now he is going to prison,”.

But, the counsel for the accused person John Ndebugri said they may proceed to the High Court to secure for their client if the prosecution fails to conclude their investigation on the next adjourned date.

Lawyer John Ndebugri raised concerns over death threats and warned those behind that acts to desist from it since it against fundamental human rights and administration of justice.