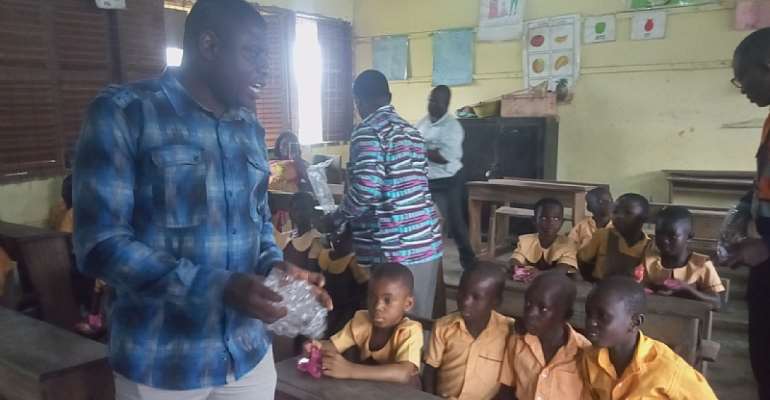 The Municipal Chief Executive (MCE) for Tarkwa-Nsuaem in the Western Region, Hon Gilbert Ken Asmah has formally welcomed hundreds of first-time basic pupils into the formal school system for the 2019/2020 academic year at some four selected schools across the Municipality.

The first point of call for the delegation was the Teberebe MA Primary School under the Central-East Circuit where 19 boys and 32 girls were registered into the school’s class one. Biscuits and pea nuts provided by the Assembly were distributed among the children while exercise books were presented to the school authorities by Anglogold Ashanti Iduapriem.

Hon Gilbert Ken Asmah interacted with the children and encouraged them to take their lessons seriously in order to become useful persons in the future to themselves, their families and society in general. He further reminded the pupils of Nana Akufo-Addo's pro poor education policy, Free Secondary School education, urging them to work hard to enjoy the policy too. He further charged the teachers to live up to their responsibilities by assisting to mould the kids under their care and also devote proper attention to children with special needs and learning difficulties, he mentioned.

Mr. Alex Duah, for his part appealed to the teachers to put up the best of their ability always, explaining that the Municipal Assembly and central government on its part was poised to motivate teachers adequately and also organise training courses for them to improve their knowledge on the job.

He was also impressed with the enthusiasm and joy on the faces of the young children who thronged the schools to be part of the formal education system. He noted that if the foundation is properly laid for these children, the Municipal performance in the BECE exams will certainly improve in the coming years.

In his submission, Mr. Affelkum disclosed the Nana Akufo-Addo's commitment to maintaining a healthy mind and physical being of the pupils, to wit a health screening exercise will be conducted for all basic schools nationwide to enhance the quality of education, he added.