Xenophobic Attacks In South Africa; Is Violence The Way To Go? 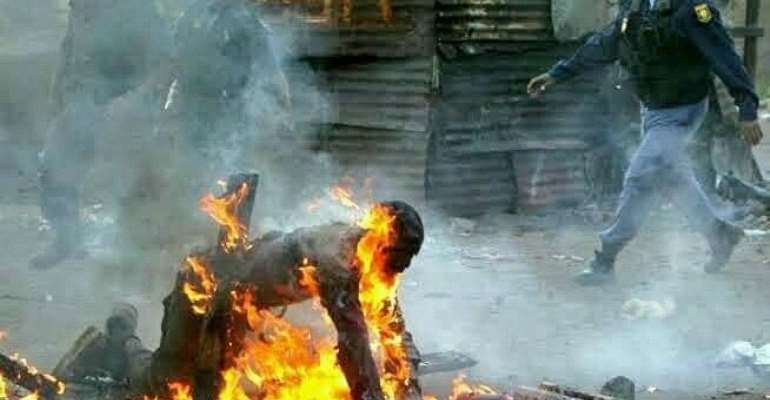 Waking up to gory images from the xenophobic attacks in south Africa is not only disturbing but also poses a threat to the general security of Africans and socio-economic activities. For the past few days, the media has been flooded with images of people being lynched to death, looting and burning shops owned by Nigerians and other foreign nationals. This gruesome murder of people in South Africa, i must confess, is an eyesore and very nauseating.

How did we get here as a continent? What has happened to the ideals and spirit of ‘Ubuntu?’ These xenophobic attacks did not just start last week. It is imperative to note that over the last 12 months about 116 registered extra judicial killings of Nigerians in South Africa have been recorded according to Sophia Adengo, SABC Nigerian Correspondent. In 2008, about 60 people were left dead as a result of xenophobic attacks in South Africa as stated by Dewa Mavhinga, a Senior Researcher, and Human Rights Watch, South Africa.

Many citizens of South Africa in their quest to justify these gory and inhumane acts of violence have resorted to the usual blame rhetoric. Some of the citizens have accused other nationals in South Africa especially Nigerians for entering South Africa illegally, selling of drugs, trafficking of people, selling of counterfeit goods and evading taxes. There is no gainsaying the fact that these allegations levelled against Nigerians and other nationals could be true. This is because no nationality is immune to such crimes including South Africans.

Your guess is as good as mine. Mere anarchy would break loose on the African continent and the continent will engage in a ferocious battle against each other. An eye for an eye will certainly make the continent go blind. This definitely goes contrary to the basic tenets of the founding fathers like Steve Biko, Nelson Mandela and the likes who defied the odds and stood the test of time to fight for freedom. This is certainly a damning indictment on what they stood and fought for as leaders in their own way for their country.

It is evident that those who are venting their anger on foreign nationals in South Africa should rethink their decision.

Granted that foreign nationals are engaged in all the crimes levelled against them, should violence be the way to go? There are many ways to tackle this lingering problem of miscreants trooping into South African borders. South Africa is a sovereign nation; therefore they have the mandate to take independent decisions devoid of international interference. Therefore if the South African government and nationals think that foreign nationals are a threat to their peaceful existence then the best option is to deport them to their respective countries. In this circumstance what happens to the concept of deportation? When Britain realized that Kweku Adoboli was a threat to them, they deported him to the place of his birth without resorting to violence or lynching him to death.

Drawing from past happenings in South Africa and the recent development in South Africa, it is evident that there is failure of political leadership and a clear lack of political will and desire to speak vehemently against these acts of violence taking place in South Africa. The leadership has failed woefully in taking pragmatic steps to ensure the enforcement of law in the country.

There is no gainsaying the fact that the political leadership has used foreign nationals as an excuse for the failings in basic service delivery. Senior officials of government have been caught on tape making partly xenophobic statements which is worrying. The Mayor of Johannesburg, Herman Mashaba was caught on video blaming the high incidence of crime rate on foreign nationals. It is a travesty for the leadership to incite the youth against these foreign nationals instead of focusing on playing their role in enhancing basic service delivery.

The bottom-line is that this is a failure of system and the leadership should allow the law to take its due cause. If people are engaged in such acts which are contrary to the laws of the country then it behoves on the political leadership to enforce the law to deal with them respectfully and not to resort to violence. This is inhumane and barbaric and really drags the reputation of the continent into the mire. The posture and demeanour of the political leadership should be one which is clear and loud against these gory acts so as to clamp down on xenophobic attacks immediately.