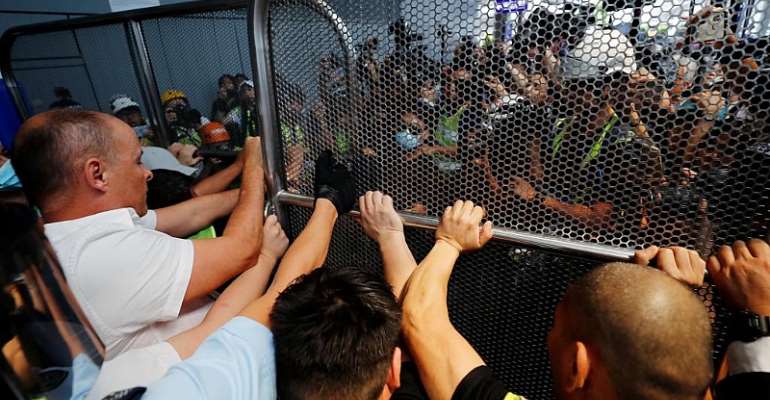 The battle for democratic rights continued in Hong Kong on Sunday, on the roads to the international airport. Five people injured in clashes between police and protestors on Saturday are reportered to be in a serious condition.

The Hong Kong Airport Express train was suspended on Sunday afternoon during the 13th weekend of action to demand democratic rights and maintain freedoms in Hong Kong.

Protesters dressed in black and under umbrella, built barricades at the airport bus station and tried to stop traffic on the main road leading to terminals.

Passengers whose planes were taking off on time found themselves walking with their luggage to escape the traffic jams and make their flights.

No let up in three months
Acts of violence have crept into the movement that began as opposition to the authorities' plan to allow extraditions to Mainland China from Hong Kong.

On Sunday, the acts of violence seemed like small scale hooliganism compared to the mass mobilisation on Saturday which was largely peaceful until the evening.

Outside one airport terminal, protesters whom one South China Morning Post columnist calls "radicals" set off fire extinguishers, piled luggage trolleys into makeshift road barricades and smashed surveillance cameras before being driven away by police.

Many protesters went to the town of Tung Chung, near the airport where they used fire hoses to flood the metro station, sprayed graffiti on its walls, and also burned a Chinese flag.

The airport is covered by an injunction banning protesters from entering, imposed after a shutdown in August which ended in ugly clashes.

However the bans don't necessarily prevent the protestors from trying to gain access.

The movement now has become more broadly anti-government, although the protestors have stopped calling for Chief Executive Carrie Lam to step down.

One anonymous local source who had not supported the 2014 Umbrella Movement that brought the financial district to a standstill for almost 80 days in bid to secure universal suffrage for Hong Kong said, "Even if we don't like the violence, nearly all of us are behind this movement."

Thirty-one people were admitted to hospital with injuries following the clashes, including five who were in a serious condition.

The police followed up with raids in the underground railway and made scores of arrests.

Unequal treatment says AI
Local media video footage showed elite police charge a crowd cowering inside a train carriage. One man in particular is shown, drenched in pepper spray, crying in anguish on his knees as he tried to protect his female friend.

International NGO Amnesty International described the police raid on the train carriage as "horrifying" and have called for an investigation into police conduct.

"Violence directed at police... is no excuse for officers to go on the rampage elsewhere," Man-kei Tam, director of Amnesty International, Hong Kong said in a statement.

The Hong Kong police issued a statement saying that, "Escalating violence and [the] progressively lethal weapons of protestors, the safety of police officers and... the public is seriously threatened,"

Ready for anything
Beijing views the protest as a direct challenge to its rule and is watching closely. China's state news agency Xinhua posted a video on Twitter late Saturday showing armed Chinese riot police holding "anti-riot drills in Shenzhen", a city to the north of the Hong Kong special administrative region.

Police on Friday rounded up several high profile pro-democracy activists and politicians in sweeping arrests that rights groups said was taken directly from Beijing's strategy for the mainland.

More than 900 people have been arrested since June in connection with the protests.

British citizenship claims
In the light of the escalating violence, and fearing for their future, about 300 people demonstrated outside the British Consulate in Hong Kong on Sunday. They brandished their British National Overseas documents which they obtained when Britain handed back to Beijing authority over the territory in 1997.

They want Britain to grant them right of abode in the UK. BNO holders' current status allows only them consular assistance.

After the British foreign secretary Dominic Raab called last week Lam and said that “meaningful political dialogue” and “a fully independent investigation” into the violence would be good, China warned the UK about "interfering" in its former colony, and said Westminster was making "random accusations".

On Monday students are beginning a university boycott and calls for a general strike have been circulating.