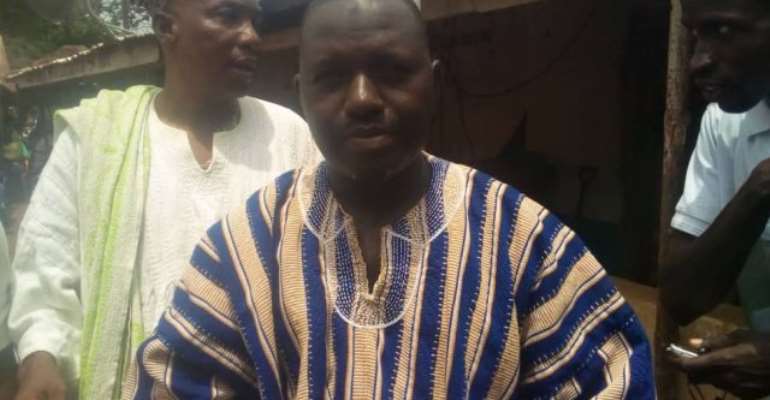 On Saturday 24th August, residents of Kumbungu and indeed the nation were shocked to hear news of the NDC Parliamentary Primary. A little known Lecturer at UDS, had won the election that was tipped highly in the favour of sitting MP, Ras Mubarak.

What many however did not know was that, there were unseen hands both internally and externally who did not want Ras Mubarak back in Parliament, obviously for their selfish reasons.

I shall deal with the internal forces at a later date, for now, let me tell you about the little opportunist who was bankrolling the winner of the Kumbungu election.

His name is Tanko Hamza, described in some news items as Business Advisor to the Minister for Business Development.

The Minister for Business Development, Hon. Mohammed Awal by the way is from Kumbungu. This so called Business Advisor to the Minister for Business Development had bankrolled the campaign of Dr. Hamza Adam In the 2015 NDC primary. But had failed because the delegates in that election were a little more than 12,000 and bribing more than twelve thousand delegates was next to impossible, hence Dr. Hamza’s abysmal showing in that primary. Ras Mubarak, the incumbent, in 2015 had pulled more than 6000 votes. His closest rival, a former MP for Kumbungu had a little over 3000 while Dr. Hamza and two others shared three thousand votes.

When the NDC reverted to the delegates system of smaller electoral colleges, it opened itself for opportunists to meddle with their elections. And unlike in 2015, total number of delegates in the just ended primary in Kumbungu were 771.

This NPP bankroller of Dr Hamza Adam’s campaign was physically present on the day of voting, had accreditation given to him by his name sake and spent allegedly between 500 and 700 cedis per delegate on Election Day.

We have also heard the Regional Chairman of the NPP for Ashanti region confirming that they meddled in the elections. The questions leadership of the NDC at the National, Regional and Constituency levels must be concerned about are - who gave - Mr Tanko Hamza accreditation? Why was he at the voting ground, in the company of the winner of the election and at the counting? What are the implications of an NPP sponsored candidate in the general election in 2020, and should he win, can the NDC caucus in Parliament trust him with caucus discussions? If he can be so gullible to have bragged to delegates that he was awaiting the arrival of his name-sake, a bankroller to finish off Ras Mubarak, then he can at least be described as low grade material for Parliament.

This phenomenon is raising questions bothering legalities - as the Ashanti Regional Chairman of the NPP, one Wuntumi, being emboldened by the support of the Jubilee House through a substantial cash flow, has openly claimed his personal influence towards Hon Ras Mubarak's defeat. Whereas most NDC sympathizers see Wuntumi’s assertions as mere political mind game playing, investigation into his utterances point to an active manipulation and compromise of NDC aspirants and some executives in NDC strongholds especially in the Ashanti region.

It must be pointed out that Wuntumi’s radio appearance and statement are a violation of electoral rules and regulations under any democratic government and could be held against him, if not under this corrupt government, by petitions against him with the United States State Department, for engaging in electoral malpractices and money laundering.

The National executives of the NPP have opened denied any sanctions for Wuntumi’s actions but in the same breath have asserted their reluctance to conduct any investigations into the facts. This practice would in the long run mire the growth of democracy in Ghana.

The NDC, with this credibility issue over the head of their candidate in Kumbungu would have to work twice as hard to get Dr. Hamza Adam to Parliament. The record, and the bar are set so high. With the sterling record of Hon. Muhammed Mumuni and Ras Mubarak in Parliament, the elected candidate has his work well cut out for him.

You Won't Be Shielded For Misconduct – IGP Cautions Police O...
39 minutes ago