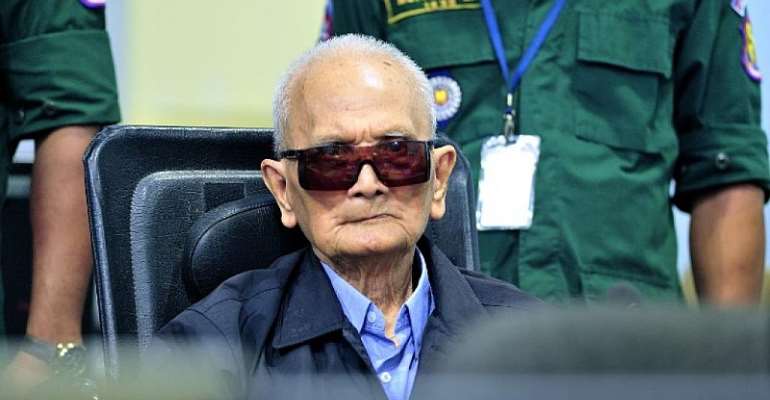 The man known as 'brother number two' in the Khmer Rouge regime of Cambodia has died at the age of 93. Nuon Chea was convicted of genocide by a UN-backed court last year.The reign of terror he took part in, led by Pol Pot, left some two million Cambodians dead between 1975 to 1979.

"We can confirm that defendant Nuon Chea... passed away this evening on 4 August, 2019, at Khmer Soviet Friendship hospital," Neth Pheaktra, a spokesman for the court, said on Sunday.

His death coincided with the 40th anniversary of the fall of the Khmer rouge, the popular name given to the followers of the Communist Party of Kampuchea (CPK).

In 2014, he and another Khmer Rouge leader Khieu Samphan, were jailed for life by a United Nations-backed court (ECCC) which found them guilty of crimes against humanity for their roles in the Khmer Rouge's genocidal campaign.

During the forced evacuation of Phnom Penh in 1975, Khmer Rouge troops drove the population of the capital into the countryside to work as farmers.

The UN-backed court also then sentenced Nuon Chea to life in prison in 2018 after he was found guilty of genocide against the ethnic Vietnamese and Cham Muslim minority group.

Regret and disappointment
For Ung Bounhor Billon, who witnessed the genocide, she regrets that Nuon Chea had such a comfortable death in a hospital when he was responsible for the deaths of so many innocent people.

“I'm not sad. I regret that he had a peaceful death, in a bed, in a hospital, cared for properly…that's difficult to accept,” she told RFI.

“He doesn't deserve such a dignified death. He who had innocent people murdered and tortured. I regret that all the leaders of the Khmer Rouge, all the people who took part in the khmer rouge regime were not tried.”

After Vietnam invaded and deposed the regime in 1979, Nuon Chea fled with supporters until he was pardoned by the state in 1998 under the terms of a peace deal.

Ung Bounhor Billon, along with many other Cambodians are disappointed that more leaders and other people implicated in the khmer rouge were not put on trial.

She goes on to say that she holds former King Norodom Sianouk (in power between 1953 and 1970) accountable for allowing the khmer rouge to exist in the first place.

No true justice
“I asked for him to be tried, but I was told that for certain reasons, the tribunal couldn't take him on. I regret that, and I'm not alone. I regret that the real truth has not emerged, like for the Nuremburg trials. We never had this form of justice.”

George Wright, who reported from the tribunal for three years for the BBC wrote that "Nuon Chea blamed the majority of the killings on rebellious factions within the ranks of the Khmer Rouge who defied orders, although little credible evidence of this has ever been presented."

Lawyers had informed the court that Nuon Chea would appeal, but prosecutors are now expected to ask the Supreme Court chamber to terminate his case following his death, according to a court official.

The hybrid court, which uses a mix of Cambodian and international law, was created with UN backing in 2006 to try senior Khmer Rouge leaders.

Huge cost, lengthy process
It has convicted only three people so far and cost more than $300 million.

Former Khmer Rouge foreign minister Ieng Sary and his wife died without facing justice, while Pol Pot passed away in 1998.

Current Prime Minister Hun Sen, a former Khmer Rouge cadre, has warned against future investigations, claiming it would plunge the country into chaos.

Tribunal watchers believe that last year's ruling will be the final verdict, raising questions about the court's legacy in a country where many are too young to remember the Khmer Rouge.

Youk Chhang, head of the country's pre-eminent Khmer Rouge archive, the Documentation Centre of Cambodia, said Nuon Chea was "born innocent but he committed sin and so he died with sin".

"The crimes he has committed will always be a lesson for us all in the future."