Torture Home (3) ...When Reverend Lamina Steals Food For Orphans And Sells For His Personal Gains 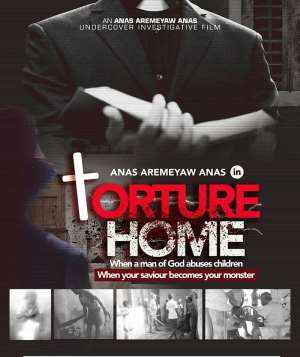 He is believed to be a benefactor bringing bliss to the blighted lives of this bunch of beleaguered boys and bashful girls. But Reverend Lamina betrays benevolence with burning greed for earthly bread and butter, careless of the Bible’s blessing for the benign and beneficent.

Reverend Lawrence Lamina, the General Manager of Echoing Hills Village and pastor at the Hope Community Church, has been secretly filmed stealing and diverting items donated to the home to his private shop for sale to the public.

In what can be likened to pouring water into a leaking pot, food and other items donated to the home by philanthropists are carted away almost as soon as they arrive, thus leaving a permanent hole in supply. The kingpin of this syndicate, ironically, is Rev Lawrence Lamina, General Manager of the home.

In one incident a group of people were captured loading the donated items into the bucket of a Toyota pick-up and a saloon car. The night-time operation, which was supervised by the Reverend Minister himself, saw several items fetched from the Home’s storeroom and carted to a warehouse and a grocery shop in Tema. A follow-up probe established that the receiving shop belongs to Reverend Lawrence Lamina. Some of the items were subsequently taken to Haatso and unloaded into a container at the Handy Evangelism Ministries International Rehabilitation and Resource Centre Children’s Home, an orphanage which is privately operated by the Reverend.

Our investigations revealed that the General Manager often instructed the children in the Echoing Hills Home to sort out the items and remove their labels as soon as they are donated to the home and packed into the storeroom. The pealing of the labels was to make the items easier to sell to the public without raising suspicions. This is because some of these stolen items are also sold to individuals outside the home whom he, Rev Lamina, has contract with.

Ironically, the kids for whom these donations are meant are often starved. What is worse, food items are often left until they get close to expiry before it is served to the kids. Sometimes, the provisions are actually left to expire. As if to taunt their victims or rub salt into their wounds, the caregivers make these very children, who were denied the food while it was wholesome, carry the expired food items to the dump site to dispose of them.

On some occasions, the inmates were served porridge without milk and with bread that had visibly gone bad.

It would be recalled that the Reverend Minister went berserk, threatening to kill one Kuchi, an adolescent inmate, for pilfering from the home's store. Yet, here he is, robbing the facility, scraping the store clean of its provisions.

Like their boss, the caregivers of the home also help themselves to the donated items for their personal use such as wedding ceremonies and other organised events without paying for them.

The caregivers’ booties include the use of the home’s computer lab. A lab that was never used in all the months of our investigation even though the home had ICT (Information and Communication Studies) on their time table and the over 10 computers were all in good shape. The only people you’ll see in the ICT lab are some of the caregivers who used it for facebooking and other personal stuff. The school’s mini-van also meant to transport the children to school is also put to use only when the white volunteers and donors are in the facility. The van is then parked after their departure until it’s time for the general manager to transport goods to his private warehouse.

An inmate has to wait for a sponsorship before he or she can have access to any form of education. Yet, the home’s services include providing inmates/children of with home and occupational skill training including, Dressmaking/Sewing, Bread Baking, Bead Making, Woodworking/Crafts and Agriculture - Animal Husbandry and Crops.

In a related development, the village meant to be home for the homeless, abused children, the neglected and the disabled, is gradually turning into a boarding house where some parents pay boarding and tuition fees to the general manager to get their able-bodied children to stay in there.

In reacting to the act of managers, caregivers and the children in the orphanage stealing, selling and mismanaging the donations to the orphanage the retired Man of God advised his fellow orphanage managers not to see their service to the children as a commercial venture but as a way of giving back to the society and the children from what the society has given to them. “Yeah, the same way we’ve put measures in place in the sense that not everybody goes to the store room to take out food. And also when there’s a request there are people who have to go there and give you the food. And then when you also want to give food out, you have to also let the others know where the food is going. If the food is going to another orphanage home to help, we know that the food is going to this home. Or this food is given to a family who is in need. They are coming from outside and there’s a child that needed to be given some food. (Then) you know that this food is going to the family. So we make sure that at least where the food is going, it’s going to be put to good use to benefit children but not for commercial purposes for an individual’s benefits”

Lamina, who claimed they have a sister orphanage home under his leadership with which they share their donations also added that under no circumstances will the home sell any of their donations to cater for a financial problem when asked whether any situation can push them that far. “If we need money, we put our request out to our friends and our donors and we give them our specific needs. If it’s bills, this is the bill and this is how much, so, we want you to help pay the bill. And if the money is not coming we take the bill and spread it out to our donors, so, they contribute to pay off that bill. Not necessarily going to sell any food to pay for it but incases of emergency, we put the bill there and our people take care of it”, he said.

Echoing Hills Village; a facility that takes care of over 80 inmates of all spheres of life, particularly the homeless, victims of child abuse, orphans and neglected children including children with disabilities and special children; is located at Madina-Ogbojo in the La Nkwantanang-Madina Municipality, Accra, and was established some 25 years ago.

Resignation Not Part Of Our Covid-19 Laws, Prosecute Carlos...
41 minutes ago