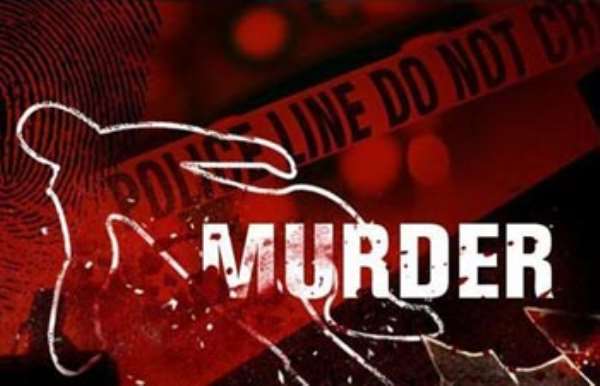 The two biological parents,Madam Etornam Magic and Mr Mawuli Ladzedo of a four-year-old pupil, Mawufeasi Ladzedo who was murdered by unknown assailants at Simon Kope, a fishing and farming community in the over bank at the Tongor-Dzemeni in the South Dayi District of the Volta Region have made a shocking revelation.

According to the two, they were surprised not to be allowed to see the dead body of their son before the elders including the chief and Queen of the area, Togbe Havor and Mama Adokuwaa have ordered for the burial of their son on Tuesday May 28,2019 without making any official report to the Donkorkrom District Police Command.

Madam Etornam Magic and Mr Mawuli Ladzedo disclosed that they were only informed by the elders, Togbe Havor and Mama Adokuwaa that the Asafo groups discovered the dead body of Mawufeasi Ladzedo which they said was buried under the demaged fishing canoe along the black Volta lake on Tuesday May 28, 2019.

They stated that they were told that Mawufeasi Ladzedo's forehead was smatched and parts of his body bruised and bloodied including his tongue was cut off from his mouth.

"And also, we were told that the skin of his lower-left leg was reportedly flayed, or peeled off, and his nostrils and an armpit dripping with blood when the body was discovered by a couple of his neighbors and Asafo groups of both Simon and Havor communities," Madam Etornam Magic and Mr Mawuli Ladzedo further detailed.

According to them, they were also warned by the chief and elders including the queen mother not to make further comment on the murder of their son to either media or individuals including the police for which "we obliged until recently the matter has gone viral on the media platforms."

Madam Etornam Magic and Mawuli Ladzedo who are the natives from the Battor Traditional Area in the North Tongu District of the Volta Region made above sterling revelations while the both speaking on Battor-Aveyime based local radio station, Klenam FMon Friday May 31,2019 being monitored by Today.

Their revelations followed when Today broke out the news in its Friday May 31,2019 edition of the murder of Mawufeasi Ladzedo which happened on Tuesday May 28, 2019.

Today reported that the boy got missing on Sunday May 26,2019 when he was dressed up by his mother, Madam Etornam Magic and asked to follow his colleagues to go the church service at the Simon Village branch of Divine Healing Church. But the boy did not returned home after the closed of the church,Today report has confirmed .

Today report indicated that the dead body of Mawufeasi Ledzedo who got missing on Sunday May 26, 2019 was found buried under the demaged fishing canoe along the black Volta lake on Tuesday May 28, 2019, while his body parts including his tongue were missing.

When contacted Togbe Havor and Queen-mother of the area to respond to the new development emerging about the murder of the boy the two admitted to have ordered for the burial of the deceased, confirming that the two parents of the deceased, Mr Mawuli Ladzedo and Etornam Magic were not presence.

But they stated that the biological father of the father of the late Mawufeasi Ladzedo and some relatives were there before they burried the deceased.

Meanwhile, an earlier report had, curiously, suggested the incident to have been foul play, although we had also learned that the corpse of the deceased showed signs symptomatic of a ritual murder of some sort; for the scrotum of the dead man was reported to be bruised and bloodied.

Further information gathered by Today indicates that the mystery surrounding the murder of the boy is that the wee farmers in area lured the boy to kill and allegedly drained blood from his body to perform rituals, ostensibly to pacify their wee farms to help them to grow more wee products.

Th situation of killing innocent individuals particularly the children for ritual purposes Today discovered is becoming alarming especially during every May and June, which are wee growing seasons in the area.