Have You Given Up on the Kumawu Chieftaincy Dispute? 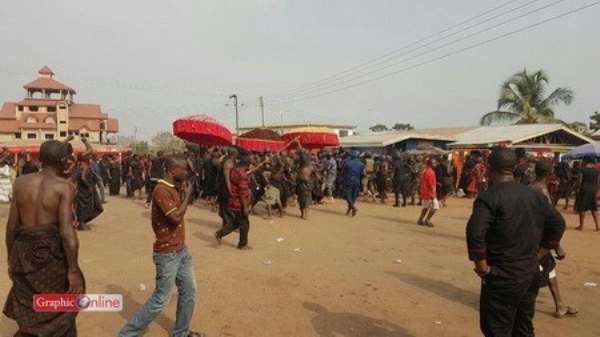 Of late, I have been having queries from certain close friends and fans if I have given up on the ongoing Kumawu chieftaincy dispute. My answer and assurance to them is a NO!

How can I give up on the case as determined as I am to ensure that justice prevails? How can I give up on the case knowing the abundant instances of injustice involved as being perpetrated by a supposedly Asante Overlord with his teeming corrupt lieutenants? How can I give up, knowing myself as a vessel of God being used along with others to liberate not only Kumawuman but also, her citizens, from enslavement under the obstinate hands of the colluding corrupt traditional leaders who think they hold Ghana in their palm like a delicate egg that they can drop or crush at any time?

How can I give up on God’s revealed winnable case until my bones are rotten and given up the ghost? It was just that I gave myself some respite from the case to retreat into hibernation to come back afterwards fully reinvigorated. And, I have now come back! Therefore, my fans must stay tuned to hear from me on the updates of the Kumawu chieftaincy dispute.

For a short recap, below are the salient points worthy of the public notice:

1. No Asantehene is vested with the conventional powers to nominate, select or elect any royal to become Kumawuhene let alone, impose one of his choice on Kumawuman against the subjects’ wish.

2. No Asantehene has the customary right to forcefully proceed to Kumawuman to avail themselves of their stool lands as contrary being done by Asantehene Otumfuo Osei Tutu II.

3. The battle to ensure that the rightful royal of the people’s choice ascends to the Kumawu Kodua Stool is the Lord’s. This explains away why out of all the diabolic jujus and consultations with Mallams

as fervently pursued by Kumawuhemaa and her agents and assigns have not worked until now and will never work.

4. Kumawuman deserves to have a competent, selfless, dynamic, dedicated and an honest royal without blemish to rule it as its Omanhene but not a puppet "Yes Sir, Master" sort of person or "royal"

5. Let me reassure all those still supporting the good course of ensuring justice for Kumawuman that God has won the case for them in the spiritual realm and it is about to manifest for all eyes to see.

6. The financial constraint faced by the true royals (the Ananangyas and the Odumnases) must never be seen as any herculean obstacle to discourage, or frighten off, their supporters as God will provide.

The little said, much the better. Therefore, I will end here to come back with updates. Let’s I forget, the self-styling and the Asantehene-imposed "Kumawuhene" Dr Yaw Sarfo going by the stool name Barima Sarfo Tweneboa Kodua, on the 8th day of March 2019, partook in the public puberty celebration of some young girls and also ate from the traditional mashed yam/plantain/cocoyam called "brat3" prepared for the girls. This action of his is a taboo hence a breach of Asante custom.

I leave you with the below two intelligent and motivating quotes to think about. "In the beginning of a change the patriot is a scarce man, and brave, and hated and scorned. When his course succeeds, the timid join him, for then it costs nothing to be a patriot"------Mark Twain

Throughout history, it has been the inaction of those who could have acted; the indifference of those who should have known better; the silence of the voice of justice when it mattered most; that has made it possible for evil to triumph, said Emperor Haile Selassie of Ethiopia.

I see myself as working within the context of both quotations. What about you, oh my fellow Kumawuman compatriot? Are you for, or against, the good courses by both the quoted individuals?