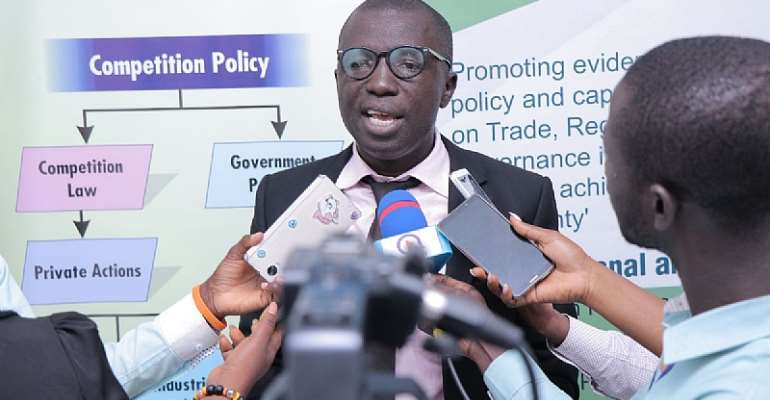 As Ghana joins the whole world to mark World Consumer Rights Day which falls on Friday 15th March, CUTS Ghana, a research and a public policy think tank is calling on regulatory bodies to be proactive and implement the already existing regulations to protect the interest of consumers against bad services and inferior goods in the absence of a functioning Consumer Protection Law.

“In the absence of the functional consumer protection law, it is imperative for sectoral regulators to step out their regulatory mandate to ensure that consumers in the country are not given a bad deal. The task for protecting Ghanaian consumers should be not reserved for a non-existent Consumer Protection Law. There are numerous provisions in existing laws and regulations which when implemented can inure to the protection of consumers from bad corporate practices.”, said Mr. Appiah Kusi Adomako, Country Director of CUTS Ghana.

Mr. Adomako made this call when he was addressing a cross section of journalist as part of activities to mark World Consumer Rights Day in Ghana.

Status of the Consumer Protection Law
For more than three decades since the country attempted to have a consumer protection law, the draft bill has now been listed among the list of bills to be considered by Parliament this year. It appears there is a diminished interest in the bill by government and businesses that is why the bill has taken long time to get passed.

Mr. Adomako mentioned that “in the absence of a functional consumer protection law, it has literally made Ghana a junkyard for inferior goods and poor service delivery. If Ghanaian businesses cannot produce goods and services to meet world class standards, Ghana may not be able to take advantage of the Continental Free Trade Agreement (AfCFTA) and exports to other markets where are standards are high.”

Financial and banking services
The Central Bank must step its regulatory efforts to ensure that the providers of financials services in the country do not abuse consumers right nor take consumers for granted. According to a research undertaken by CUTS Ghana, most users of financial services in the mentioned unauthorized charges on their accounts as a major concern to them. Key among are them are deductions made when a customer uses a third-party bank ATM machine to take money when the customer’s own bank ATM is down. Most banks in the country charges a flat monthly fee for ATM card. ATM machine can be unavailable or down due to a number of reasons: power outage, lack of funds, system issue or machine breakdown etc. All these reasons are however, not a fault of customers. However, when a customer uses a third-party machine to withdraw money at the time when his own bank ATM is down, the customer incurs a cost

which is not refunded to him by his bank. To resolve this mischief, CUTS Ghana is appealing to Bank of Ghana to allow customers to be able to use third party ATM twice a month for a withdrawal without any charge to counter the effects of ATM breakdowns in the country.

Again, consumers also complain that there no information disclosure on fees and charges, for an example when one intends to use a third-party visa ATM for withdrawal. In most countries, prior before proceeding, the charges to be incurred are indicated to the consumer, giving the customer with a choice to either proceed or not with the transaction.

Another practice which some consumers have also expressed worry about is that some banks charges a customer who walks into the branch to make a withdrawal of less than GHC 1000. If a bank can accept a cash deposit of under GHC 1000 without charging the customer, then the same bank should be able to allow the customer to withdraw any amount below GHC 1000 without incurring any charges. This practice is very unfair since it is not compulsory for one to use an ATM. If care is not taken it, would repel people from using banking services.

Electricity
Of late, lots of Ghanaians using pre-paid ECG/PDS meters have been complaining that the units they buy for their prepaid meters have been running faster than it used to be though there has not been any upward review of tariffs. 65% of percent of respondents sampled complaints about this. Whilst lots of reasons could account for this, CUTS Ghana is requesting PURC to mandate the PDS to provide enhanced disclosure of consumption for those who use pre-paid meters. For now, it is making is seems that one is better off with a post-meter. CUTS therefore calls on PURC to investigate the complaints and address them.

Aviation
Since Ghana has not been able to domesticate the Montreal Convention on the rights of airlines passengers, the rights of Ghanaian air travellers are sometimes violated without recourse mechanism. Issues of delays, flight cancellations, delays, over-booking, delayed and lost luggages are major concern for passengers. Whilst some international airlines that operate in Ghana keep to a higher standard in their home country and other markets, but when it comes to Ghana, they keep to low customer service.

As the country plans to make the Accra airport an aviation hub, CUTS is calling on the Ghana Civil Aviation Authority (GCAA) to operationalize the Consumer Protection Directives as a way of protecting consumers from unfair practices.

Telecom services
Consumers have expressed a number of concerns they face in the telecommunication sector of the economy. Key among them are the high cost of internet/data and its expiration, poor connectivity and poor quality of calls.

CUTS Ghana calls on National Communication Authority to avoid over- regulation in the sector which increases the cost of operation on the telecos. CUTS also is calling on the Telcos to take a second look at the expiring date they place on data bundles. MTN and Vodafone can take a cue from the no expiring data bundle plan instituted by Airtel/Tigo.

Road and Public Safety
One of the rights of a consumer is the right to safety. The rise of road accidents on major roads in urban areas has become a major concern to motorist and pedestrians. The Police Service for example reported over 1,200 motor accident deaths, 6,145 accident cases and 11,053 vehicles involved in accidents from January to June 2018. These accidents are not only a result of driver recklessness, but also the poor nature of roads, consequences of unfavourable weather conditions (i.e. flooding), malfunctioning traffic light and abandoned vehicles.

The lack of adequate streetlights and/or the non-operating streetlights together with out of order traffic lights create safety and security issues. Other public safety issues such as open excavations, in discriminatory disposal of refuse, chocked gutters and drains, impairs the rights to public safety.

CUTS Ghana calls on urban roads and city authorities to as a matter of urgency to improve public safety by fixing whatever has broken.

CUTS is a public policy think-tank working in the areas consumer protection and education, of trade and development, competition and economic regulations, and governance and fiscal policy.