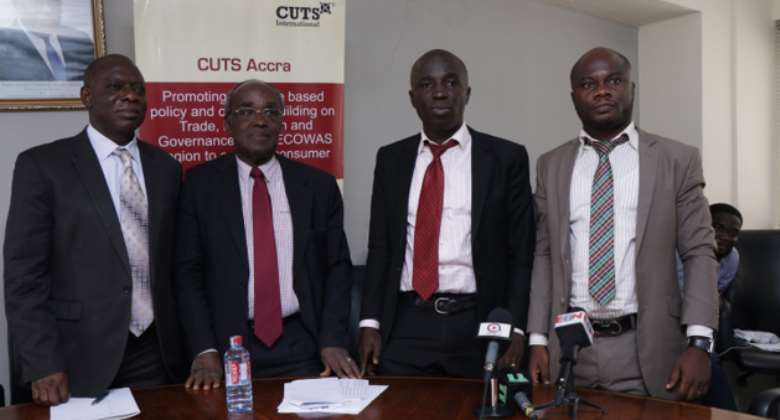 Mr. Appiah Kusi Adomako, the Centre Coordinator of CUTS Ghana made the call at the celebration of this year’s World Competition (Antitrust) Day under the theme “Competing Without Market Rules: The Relevance of Competition Law to Ghana’s Economic Transformation’. He said a market devoid of competition law could be replete with cartels controlling the provision, supply and manufacturing of essential goods and services. The event was organised by the CUTS Ghana, a research-advocacy and public policy think-tank, with support from the BUSAC Fund.

“In the absence of the Competition Law, what we are seeing is that some businesses are engaged in restrictive trade practices like price fixing, bid rigging and abuse of dominance, and when this happens, consumers suffer in the market. We are therefore using the World Competition Day to urge the Ministry of Trade and Industry to hasten the process for Ghana to get a well-functioning competition law to guide the conduct of the market,” he added.

Mr. Adomako added that Ghanaians are being denied the opportunity to enjoy high quality goods and services at competitive prices due to the absence of a competition law. He added that 70 percent of African countries had competition laws but the closest Ghana had gone to enacting the law was the Protection Against Unfair Competition Act, 2000 (Act 589) which did not address the full dimension of a restrictive trade practices.

He stated that the law when passed and implemented effectively would promote private sector development, economic growth and poverty reduction.

Honourable Alan Kyeremanten, the Minister of Trade and Industry, in a speech read on his behalf by the Secretary of the Ghana International Trade Commission, Mr. Frank Agyekum said Ghana has made some efforts to formulate a competition policy and subsequently enact the law. “The draft bill is before the Ministry of Justice and Attorney General’s Department for further considerations before being presented to Parliament,” he said

“The Ministry is working assiduously on the law. That should tell you that there is a focus to get the law passed. We however have to use the laws in practice now to deal with the challenges of anti-competition tendencies in the market. The commitment is there, so you should be sure that the time that has been given would be adhered to for the passage of the law. We should all help to facilitate the process, he added.

The Minister said Competition Law when passed would maintain, promote and sustain fair and free competition in the market, prohibit anti competition practices, and prevent practices that adversely affect the protection, welfare and interest of consumers in the country.

Mr. Kofi Amenyah, the Director of Legal Affairs at the Ministry of Trade and Industry, expressed optimism that the ministry would push for the passage of the Law next year.

Justice Samuel Kofi Date – a retired Justice of the Supreme Court of Ghana and Board Chair of CUTS Ghana – in his remarks indicated that Competition Law is an essential part of the ‘business-enabling-environment package’, and called for government to ensure passage of the law to guide the market’s conduct.

The World Competition (Antitrust) Day is a United Nations (UN) adopted day marked on December 5 every year to raise awareness on international standard for competition law under what is called the “UN Set on Competition Policy”. The Day is also marked to encourage companies and businesses to offer consumers goods and services on more favourable terms, with each company required to establish prices and other terms of its own without agreeing with the competitor.