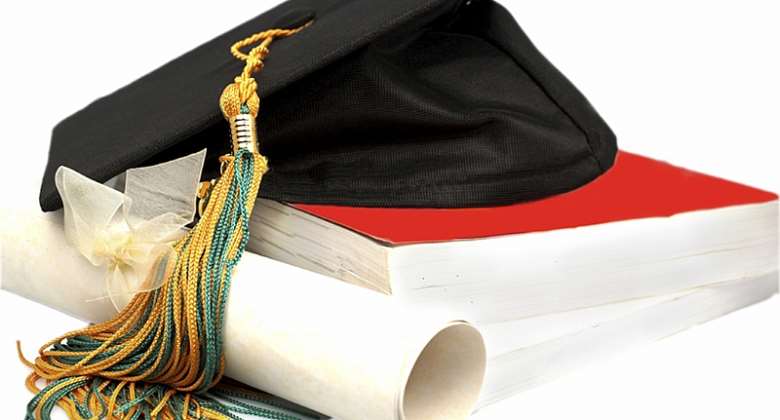 Some social media handles published a story about, Galley Felix, an 18-year old ‘traditional’ priest, who has been denied admission to Dzodze-Penyi Senior High School. The young man has been denied admission because he wears a cap that marks his initiation into a religious cult as Togbui Tueve Awunyo II of Ative (ativɛ), in the Ketu North Municipality of the Volta Region. According to the story he has won the cap for thirteen years, since his initiation and any attempt to remove it in public would have negative effect on him (going mad) and his community. The head-teacher of the school, Mr. Matthew Troha, appears unconvinced and is insisting the young man writes a letter to explain why he should be allowed to wear the cap. This is against the backdrop that the young man has explained the importance of the cap to the head-teacher.

I want to believe the story in the headline of the caption about this young man who is being denied access to secondary education because of his religio-magico cap is not true. But if it is true (which is likely to be the case), then I see a clear case of a clash of values (some of which could be very innocuous - at least from the point of view of sensibility. We may not be able to delve into the metaphysical realm to uncover the spiritual bent of values). Even so, I think this situation calls for a national dialogue over how we live in a society that is religiously plural. Not everybody is a Christian. Not everybody is a Muslim. Not everybody holds allegiance to indigenous religions. But there are Ghanaians who do not share any alliance with any of these faiths, and who may be people without any (religious) faith.

The challenge we have to bear is how to create an equal public sphere for all these strands of people. It is difficult (if not impossible in the Ghanaian case) to push religion out of the public sphere. In a country where about 80 percent claim to be religious, the pervasiveness of religion is understandable. Most religious people carry their religious convictions with them to the public sphere. For many religious people, it is simply not enough to pray in their rooms, shrines, sacred grove, churches, and mosques. They carry their faith to their workplace. They also take inspiration from their religion in their interpersonal (anthropocentric) relations. In view of the ubiquity of religion globally, many have pointed out that the (perceived) failure of secularism is because secularists could not provide secular values. So, in effect, we have secularism without secularization in Ghana!

But in all this, the question we have to ask ourselves is: how do we like people who are not like us? In other words, how do we 'like the unlike'? The head-teacher is obviously operating from a certain worldview (not just professional) that is anti-traditional beliefs and practices. I say this because, since three years ago, female Muslim students have had the (de facto) right to express their religion in wearing the veil in school. If we have allowed female Muslim students to wear the veil (in the name of secularism), why can't we as well allow a young man with a 'traditional' insignia to be allowed in school?

Unless it is proven beyond reasonable doubt that the cap he wears portends danger to colleague pupils, it will be a violation of his basic right to education. As we talk, most children with dreadlocks (making reference to children of Rastafarians) are not allowed to go to public school with their locks on. In the same way, the legal system in Ghana does not allow Rastafarians (with legal training) to practice, because of their locks. These laws are antiquated and obsolete that must be challenged and thrown into the dustbin of history. The debate against locks is biased, historically skewed, and irrelevant in a country that is religiously plural. The attempt to associate Rastafarian dreadlocks with ‘fetishism’ (or ‘fetish’ priest), for which reason locks are detested, is nothing short of non causa pro causa. It a relic of colonialism that must be decolonized!

Consequently, in a postcolonial Ghana, we are compelled to build a nation (in transition) that respects multiple values – particularly when different values do not appear to portend danger to anyone. As we chart new paths in building a nation, and in view of the case of the young man and Rastafarians, we should ask the following questions: is the young man’s academic performance going to be negatively affected because of the cap? Would the Rastafarian underperform because of his/her dreadlocks?

We have come far in our democratic experiment and cannot allow our personal whims to derail the future of those we disagree with on matters of faith. The state should redefine Ghana's perceived secular status to clarify some of these emerging issues. In the end, the young man should be assisted to draft his letter, but even without the letter, his explanation about the ritual significance of his cap should suffice to enable him to continue his education.