The RTI Bill Is Critical In The Fight Against Corruption 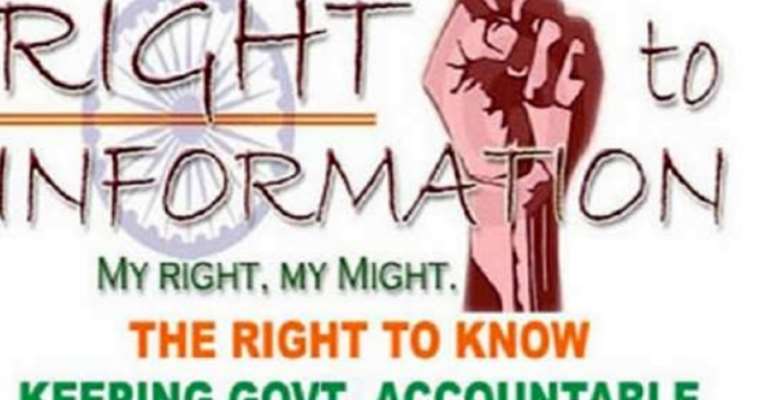 Ghanaians voted for change and that change must see the " passing of RTI bill into law. Successive governments have failed the good people of Ghana for failure on their part to get citizens Right to information Bill passed into law which is very crucial in the fight against corruption. This bill has been in parliament for two decades and i still wonder why the peoples representative finds it very precarious to pass it into law. This particular bill has gone through all the necessary consideration stages in parliament as the rudiment of parliament requires yet, we are always told stories every other day.

We have 275 constituencies in this country. Every four years we elect an individual to go and represent us in parliament because all of us cannot represent ourselves in the house. The person is in parliament to represent the views and the aspirations of his people. We elected them to champion our collective interest as citizens of the Republic of Ghana and not their own interest. It is however surprising that, a bill that is going to give citizens the will power and the right to access information particularly on how their taxes are being used by public office holders has not seen the light of day in the area of "PASSAGE". Corruption has been the bane of this country's progress and the only way we can "nip it in the bud" is the RTI bill. If we fail to pass this bill into law, then there is no way we can win the fight against corruption.

How can the office of the special prosecutor function effectively without the Right to Information Bill?. If under this democratic dispensation citizens cannot get an Act of parliament that would empower them to have access to certain informations upon reasonable request, then we should close our minds on the fight against corruption. Though the supreme law of Ghana provides every citizen the right to information under article 21(1)f but what has been realised in the previous years is that, the refusal by state institutions to freely provide such information reasonable upon request by citizens without justifiable reasons informed the idea of the need in crafting this Bill so that, citizens wont be compelled to go to court to request for somwthing which is a constitutional right.

Some of us have seen the deliberate attempt by some members of parliament to delay the passage of this bill for reasons best known to them. This piece is to serve a strong warning to those individuals to be mindful of the fact that, all powers of Government spring from the Sovereign Will of the People and for that matter, any move geared towards killing this bill would be resisted with massive protestation and serious civil uprising on the peoples representative.

I am happy that, the likes of occupyGhana®, and other civil society organisations have declared every friday as "redfriday" as a sign of serious protest with regard to the delayance in "passing" this bill into law. Citizens of this country must rise up and join this fight in our own collective interest. You can join this fight by wearing red on every friday starting from this coming friday. Wear your red and post it on social media and caption it" redfriday..Pass the RTI bill now".

# We need a credible Right to Information Bill now#