"The Chinese Will To Censor Critical Opinions In Africa Is Worrying" 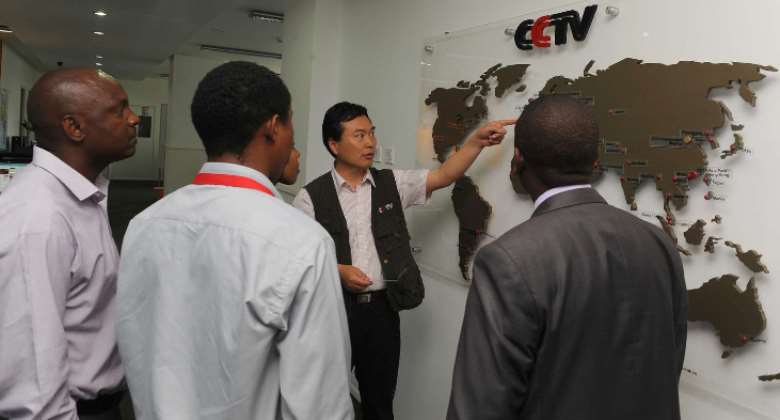 Chronic. "I wrote my editorial about the repression of Uyghur Muslims in China's Xinjiang Province. A few hours after the release of the paper edition containing my article, I learned that it would not be put online. The next day, my weekly column was deleted. " Azad Essa is the first journalist in Africa to suffer the brunt of the censorship imposed by the Chinese media.

His column, "At the End of the World," was published weekly since September 2016 in titles belonging to Independent Media, the second-largest South African news group. A company controlled at 20% by the China-Africa Development Fund (CAD Fund) and the broadcasting company China International Television Corporation (CITVC).

"In a democracy like South Africa, it is not acceptable that the editorial line of a media depends on the nationality of its investors," says Cédric Alviani, director of Reporters Without Borders' East Asia office ( RSF). This example reflects Beijing's growing influence beyond its borders, which aims to impose a new global media order , which would exclude journalistic ethics and the right of citizens to information. "

"We are not puppets"
The case concerns this time a journalist, but it is not the only example of this desire to control his image. On 29 September, a law professor, Patrick Loch Otieno Lumumba, was denied entry to Zambia, a country extremely dependent on Chinese loans. Kenyan, whose very critical positions are known, was invited to speak at a conference on China's influence in Africa, but he was stuck at the airport and sent back to Nairobi "for security reasons. " .

In Namibia, in the run-up to the September China-Africa summit, Ambassador Zhang Yiming publicly asked President Hage Geingob to show greater enthusiasm for Beijing and to affirm "strong political support" in his speech at this diplomatic event. "You should not tell us what we have to do , " said the head of state. We are not puppets. "

In South Africa again, the academic Anthony Ross was denied a visa for China because his classes were considered too critical: "I was told that I was too attached to the problems of Taiwan, Tibet, Xinjiang and the Cultural Revolution. " The consulate would have told the director of the Center for Chinese Studies at Stellenbosch University that he could no longer make the country as his classes would not put more light on the success of the" New China. " For Anthony Ross, the Middle Kingdom is increasingly asking Africans to represent it "in a certain way" .

This propaganda is more or less soft. It can take the form of investments - and we know that Beijing has deep pockets. The Chinese group StarTimes, which already distributes its programs on the cable networks of the continent, has recently become the majority shareholder of the South African provider of satellite access TopTV. In Senegal, the national daily Le Soleil distributes free the Chinafrique magazine of the State Group Beijing Review. And even in Europe, according to a Bloomberg News survey , China has invested nearly $ 3 billion (€ 2.4 billion) in equity investments in various media over the past decade.

CGTN Africa has set up its studios in Kenya and has flooded the continent since 2012 with its information largely inspired by the propaganda of Chinese official media. Not to mention the Xinhua news agency, with 7,000 employees worldwide, based on two regional offices in Cairo and Nairobi, and correspondents in all African countries. His dispatches are offered free to the media of the continent, offering a voice other than that of major Western agencies.

Mandarin and Marxism classes
The plurality of media and opinion is good for Africa, and it is understandable that China does not feel necessarily well served by the Western press. But this desire a little too urgent to censor critical opinions is worrying .

For someone living in China, the state media is a sad uniformity. The head of state is daily headlines, lack of critical thinking is screaming. The big news channels are visible only in some hotels, and on the Internet, censorship blocks the websites of the New York Times , Radio France Internationale (RFI) and the World, as well as search engines like Google.

More insidious, perhaps, these "study groups" organized by the Chinese Ministry of Foreign Affairs. Launched in 2015, they offer all-expenses-paid trips to China under the label of "training" to a thousand African journalists each year. Recently returning from a report in the city of Yiwu, south of Shanghai, I accidentally came across the plane that brought me back to Beijing a group of twenty Zimbabweans completing a month's stay in the country. A journalist (who prefers not to give his name) detailed the program: visit Yiwu special economic zones and then local televisions and, above all, talk about the Chinese economic power, learning Mandarin and courses of Marxism. Not a single day of rest in this one-month course, but an envelope of $ 400 given to each participant for his expenses while accommodation, transportation and food were taken care of.

The journalists - most of whom were the first to visit the country - came out seduced by the technological advance of the world's second-largest economy, but did they understand China-Africa? No. The young journalist explained to me how difficult it was for the Chinese to communicate in English, to be open to the diversity of African cultures and to explain their politics on the continent.

So what is really missing from this Chinafrica? Neither money nor ambition. But perhaps the willingness to share rather than impose his mark. No African refugee has been welcomed by the Middle Kingdom while even his Japanese neighbor, though very closed to foreigners, receives a few dozen each year. Visas are increasingly difficult to obtain for nationals of the continent who do not go through official exchange programs or university scholarships. And the young people who have benefited finally leave in their country with the image of a China certainly generous but closed, hermetic with foreign influences.

"There, we still come to touch my skin to know if I'm really black, " says this young Zimbabwean. That says a lot about the distance that still separates many Chinese from Africa, and seems to be measured in light years. The soft power of Beijing advance certainly at full speed, but it seems to miss its goal.

Hottest Photo Reports
Catch up with all the political quotes from our politicians.
Advertise here
More Opinion
ModernGhana Links
Raising The Stakes, Changing The Pace
Why should religious tolerance be encourage in Ghana
Can Hemp (weed) Help In The Fight Against Corona?
Police and investigating witch-bloodletting in Ebonyi State
Benchmark value: The facts the ordinary Ghanaian should know
A Sad Day For The Environment
Medical Education In Ghana, The Preserve Of The Rich And Privileged
China and the US Competition over Africa
Ankara’s rising defence trade to Africa, is it drone diplomacy?
TOP STORIES

Ya-Na commiserates with Mahama
16 minutes ago