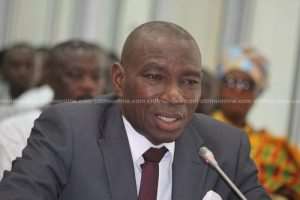 The Eastern Regional Minister Eric Kwakye Daffour, is calling for calm while his outfit convenes an emergency meeting to engage farmers, management of Newmont Mining Company and other stakeholders to resolve the current impasse in the New Abirem District.

Five farmers sustained injuries after police fired rubber bullets and tear gas at them while they were demonstrating against the management of Newmont Mining Company over their compensation package.

The demonstrators blocked roads leading to the mining site at Adeisona, as they burnt car tyres to prevent the workers of Newmont from going to site.

Speaking to Citi News, Mr. Daffour was hopeful that a lasting solution will be found.

He noted that he together with other members of the Eastern Regional Security Council (REGSEC) will meet with the leadership of the aggrieved Newmont staff to have their issues ironed out.

“From the briefing given to me, it means the protest has ended. But it's been on and off. It's not just today. Sometimes they take to this kind of action. When I get back, I certainly will sit down with REGSEC members and invite leadership of the demonstrators and Newmont and DISEC and see what we can do.”

Meanwhile, the protesters vowed to continue their protest until their demands are met.

One of them who spoke on Eyewitness News on Tuesday said “we have decided not to end the demonstration.”

But Newmont Ghana has reaffirmed its commitment to fully engage with farmers in New Abirem to address concerns over their compensation packages although it believes the farmers had already been fairly compensated .

“We all very committed to engaging with all stakeholders. It is part of Newmont's core value to engage with our communities and honour all our obligations to stakeholders. We look forward to a peaceful and amicable resolution of this issue. Whatever the court system decides, Newmont will abide by the court ruling.”