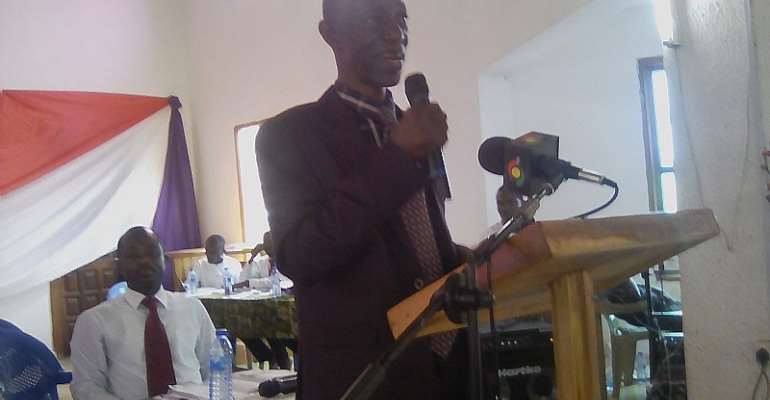 A former President of the Nkoranza campus of the Anglican University College of Technology, Prof. Kwasi Nsiah-Gyabaa has asked the Anglican Church to review its liturgical practices in order to be more attractive to people, especially the youth.

He said the time has come for the Anglican Church to discard some liturgical practices such as praying for forgiveness of sins of the dead, spending several hours during church service and solely sticking to baptism by sprinkling as the only mode of baptizing.

Addressing the 15th Biennial National Delegates Conference of the Guilds of Servants of the Sanctuary, Anglican Church, Ghana, Prof. Nsiah-Gyabaa proposed that instead of spending time pleading with God to have mercy for a dead person during a burial service, the church should rather be more concerned about peoples salvation while they are alive.

“When we go for burial services, we spend too much time praying for the dead – for God to forgive the dead. When the person was alive, he was a fornicator, he was a murderer, he was corrupt and all the ills that bring pains to society, he was part and parcel of it. He’s dead and you go spend time praying to God to forgive him”

“Why don’t we spend the time to …tell those who are alive and are in the church to change their behavior, mind and attitude so that they would be saved. So instead of wasting all the time praying for the dead, let us concentrate on the living and pray for the salvation of those who are there.”

He added that the urgent need to restructure the Servers Guild to fit the liturgical changes in the Anglican Church cannot be debated “because it is becoming clear that our service processes … are not attractive, they’re not interesting and that is why we are losing some of you (referring to the youth).”

“It also very bad about our church that when we go to church, during liturgy; what we say, what we do, the gestures, and the song that we sing… we don’t understand them….the church would not teach us why we sing a particular song at a particular time. The congregation is not aware of the meaning of these practices.”

“A common example is about baptism. You go out, you are an Anglican and they sprinkle water on you in the church house and they say you’ve been baptized in the name of God the Father, the Son and the Holy Spirit…..sometimes, we’re not able to explain why because we don’t know and because the church would not teach us.”

Prof. Nsiah-Gyabaa also asked the Anglican Church to encourage the youth to join the servers guild, saying, that’s the responsibility of the church. “The church can do that by giving small incentives to people who serve on the alter.”

On Baptism, Prof. Nsiah-Gyabaa, who is first Rector of the then Sunyani Polytechnic, now Sunyani Technical University called on the Anglican church to diversify its mode of baptism to allow for some flexibility.

“Because some people want baptism by immersion or through immersion, and others want it by sprinkling, the recommendation to the church is that why can’t we combine both so that you allow the individual to make a choice”

He was also not happy about the long hours spent during church services, saying, “the duration of the church is also another problem. You go to church, for three, four hours you are in church…although we know that yes, we have to serve God but God would not listen to your prayer because you spent hours and hours praying to him”

He was however happy about some reforms that have taken place in the church in recent times, which he described as “healthy and it’s acceptable.”

Among them, he said, are the inclusion of girls to be part of the Servers, modification of procedure for communion service to ensure that church members no-more drink from only one cup but a separate cup for each person.

For his part, the Anglican Bishop of Sunyani, Rt. Rev. Dr. Festus Yeboah-Asuamah encouraged members of the Guild to consciously seek God, especially as they are still young, live for God at all times and persevere till the end.

Over 300 members of the Guild of Servants of the Sanctuary drawn from the eleven dioceses of the Internal Province of Ghana participated in the conference which was under the theme, “Restructuring the Servers Guild to fit the Liturgical changes in the Anglican Church.”