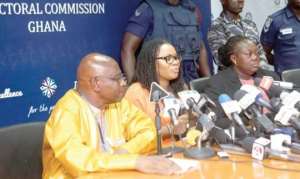 Dr. Mustapha Abdul-Hamid, the Information Minister, has cautioned against any temptation to politicize the removal from office of the Chairperson of the Electoral Commission (EC), Mrs. Charlotte Osei, and her two Deputies, Mr. Amadu Sulley and Mrs Georgina Opoku-Amankwaah.

He said it would be tragic for anyone to attempt to turn the matter into a party-political affair.

'Those, who do so, do not seek the welfare of the country', he added.

Mrs. Osei and the two deputies were removed from office by the President based on the recommendations of the Committee set up by the Chief Justice in line with the Constitution to investigate a case of misconduct and incompetence made against them.

Dr Abdul-Hamid told a news conference in Accra that, what the President did was to uphold the Constitution he had sworn an Oath to protect and defend.

Giving details of the recommendations of the Committee, he said six allegations were levelled against Mrs Osei, while Mr Sulley and Mrs Opoku-Amankwa faced four each.

After seven months of investigation, it was found that the EC Chairperson breached public procurement processes and undertook unlawful decisions that were not within her remit.

She solely awarded four contracts for pre-fabricated district offices at a higher cost of USD$14,337,962 in excess of US$6,837,962.53 without recourse to the EC's Tender Review Committee.

The value of the pre-fabricated office was pegged at US$7.5 million in a letter to the Public Procurement Authority (PPA), but the contract was awarded by Mrs Osei for US$14.3 million.

Again, the Committee's investigations revealed that Mrs Osei unilaterally abrogated a duly procured contract with Superlock Technologies Limited (STL), the firm in charge of EC's registry database, and re-awarded it to the same entity without recourse to the EC and procurement procedures.

It said her decision to unilaterally award fresh contracts to the STL in the aggregate sum of USD$22,340,814 was illegal and that she failed to comply with the internal procurement procedures of the Commission - the Entity Tender Review Panel and the Public Procurement Act.

She was also found to have awarded 12 contracts to the STL for the supply of ICT equipment and services, of which 11 of them exceeded her procurement threshold of GH¢50,000.00 for goods and services.

The Committee said all the letters awarding the 12 contracts to STL were signed by the Chairperson herself between February 08 and November 25, 2016, noting that, it was absurd for the Chairperson who abrogated the initial STL contracts due to breaches of the procurement laws to turn around and re-award the same contract to the same company.

The Information Minister said Mrs Osei engaged the services of lawyers ([email protected]) for the Commission without recourse to the procurement processes, which showed gross incompetence, ineptitude and dereliction of duty.

Additionally, there was no formal contractual arrangement between the EC and the law firm and the basis for computing legal fees involving fees of GH¢400,000.00.

She again breached the procurement laws by awarding contracts for works and consultancy service for the new EC building.

The PPA had in February 2016, approved to the EC the award for consultancy service for partitioning the new EC offices at the sum of GH¢98,100.00.

On April 2016, Mrs Osei wrote to the PPA for another restricted tender for internal partitioning of the new office block at the cost of GH¢3,410,268.00, which was also approved.

Dr Abdul-Hamid, however, said the two contracts for the partitioning of the new office block and the consultancy services were not put before the EC's Tender Review Committee as required by the procurement law.

The Committee further held that the contracts awarded far exceeded the threshold legally allowable to the EC Chairperson.

Staff the EC including the Head of Procurement Unit of the Commission and the Principal Electoral Officer appeared before the Committee to give evidence.

Mr Sulley, who was in charge of EC Operations, was also found to have lodged monies meant to perform political parties' primaries into personal accounts of key staff of the Commission, instead of the EC's account.

He defied all the known prudent financial administration practices and took over five million Ghana cedis in cash and kept same in the custody of individuals.

He was discovered to have given instructions for illegal vote transfers on the Voter Management System in clear breach of the law and operational policies of the Commission.

Under her watch, EC staff endowment fund, contributed for eight months, between 2013 and 2014, were not paid into the Staff Provident Fund.

President Nana Addo Dakwa Akufo-Addo had on July 25, 2017, received petitions against Mrs Osei, and her two deputies, from some Ghanaians and subsequently forwarded them to the Chief Justice for action.

The Chief Justice, upon studying the petitions, established a prima facie case against them and instituted a Committee to investigate the issues and its recommendation was that the three should be removed from office

'Akufo-Addo's people not talking to me anymore because of my...
8 minutes ago