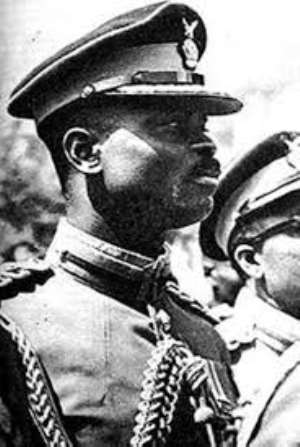 If any former public figures in the history of Ghana who are no longer with us deserve to be immortalized, Gen. Akwasi Amankwah Afrifa certainly makes the short list. Gen. Afrifa and Gen. Emmanuel Kwasi Kotoka, in concert with a few other patriots, gave Ghana a new lease on freedom when they led the military insurrection on February 24, 1966 that toppled the Kwame Nkrumah regime. The heroism of these soldiers effectively arrested Ghana's inexorable slide toward a bleak and austere future under a communist dictatorship.

Yet, as hard to comprehend as it may seem, almost none of these gallant soldiers has received the recognition that normally comes with such patriotic exploits more than 52 years on. Apart from Gen. Kotoka, who has been befittingly honored with perhaps the most visible monument of all, the nation's main air transportation hub in Accra which now shares his name, the other patriots are more or less forgotten. They are either honored or ignored, depending on which direction the political pendulum swings. When in power, the NPP is known to publicly rehabilitate their memories; the NDC, on the other hand, ignores them at best when it is in control. This doesn't seem right.

Although public sentiments about February 24 may be mixed now, all the key players in a monumental event that radically changed the course of the nation's history are entitled to be broadly acknowledged without partisan rancor as national figures. In the United States; for example, the leaders of both sides in the civil war - abolitionists and slave owners - all have their roles duly recognized in history in various ways. Some have statues erected in their memory, while others have important landmarks such as public parks, educational institutions, hospitals, highways, bridges and streets named in their honor. None of the principal actors in one of the most traumatic and gruesome episodes in American history has been ignored or relegated into obscurity regardless of the individual's allegiance in the conflict.

Ghana should emulate the American example by immortalizing all the important figures in our nation's development. Gen. Afrifa is one of the unsong heroes whose recognition is long overdue, and there can be no greater or more fitting tribute to his memory than the rechristening of the Kumasi airport in his honor. The airport in the Ashanti capital should be refurbished and upgraded into a modern international transportation facility and dedicated to the memory of the great soldier who, along with his colleagues, rescued Ghana from the clutches of tyranny.

Of course, not everyone is on the same page when it comes to recognizing the heroism of Gen. Afrifa and his colleagues who have been maligned by some as traitors who did a hatchet job for the CIA. But few people who were around at the time of the coup would support such a claim. Apart from the day independence was proclaimed, March 6, 1957, perhaps no other event in the nation's history was overwhelmingly and spontaneously celebrated as the overthrow of Nkrumah and his CPP government.

This writer witnessed history unfolding first-hand. It was a festive occasion by any measure, jubilant crowds everywhere. The sense of relief on the faces of people dancing in the streets and celebrating in the drinking bars was palpable, which makes complete nonsense of the allegation that the American spy agency orchestrated the long-overdue military revolt. America's help would have been superfluous anyway as the growing unpopularity of the regime made a grassroots uprising a distinct possibility anytime. The soldiers needed no prodding from across the ocean to act. Kotoka and Afrifa gave expression to the pent-up feelings and frustrations of the long-suffering Ghanaian masses with that memorable broadcast in the early morning hours of the day of the coup announcing the fall of the despotic regime.

The coup announcement had immediate emotional and personal meaning for thousands of people across the country who reunited within days with loved ones who had been incarcerated for years as political prisoners under the monstrous Preventive Detention Act (PDA) in the notorious Nsawam prison. All political detainees who miraculously survived the KGB-inspired torture regime behind the Nsawam prison walls were summarily set free. Unfortunately, many detainees, among them Dr J.B. Danquah, Nkrumah's foremost political foe, didn't live to see the dawn of this glorious day, perishing at the cruel hands of a tyrant's torturers.

Besides the gift of freedom for political detainees following the coup, there was for the general population relief from economic hardships and the stress of day-to-day living amid chronic consumer goods shortages. As the shortages of basic household items began to ease, prices came down and queing for mundane stuff such as soap, sugar, bread and milk, which had become commonplace throughout the country, became a thing of the past.

Needless to say, the people couldn't praise or thank their liberators enough. Because of what Kwame Nkrumah and his CPP chose to do with It, independence was becoming a nightmare and Ghanaians were waxing nostalgic about the good old days of British colonial rule. Indeed, before independence, shortages of consumer goods were literally unheard of except during the World War 2 period and its immediate aftermath. But that was a world-wide phenomenon, which quickly passed. Nor was there anything approximating to arbitrary arrests and detentions under British rule. It was a colonial administration, yet it respected fundamental human rights and civil liberties, which were values that Nkrumah, the great indigenous "champion" of freedom, scorned.

In spite of the politically-motivated vile allegations against them, the leaders of the February 24 coup were the true liberators of Ghana. Preserving their memories for posterity is extremely important. That is why the Kumasi airport should immortalize Gen. Africa's name just as the nation's premier airport in Accra keeps Gen. Kotoka's memory alive.

The channel we used was the same channel Joy FM used to get ...
1 minute ago