Alhaji Short Is The Real Deal In The Npp Chairmanship Race 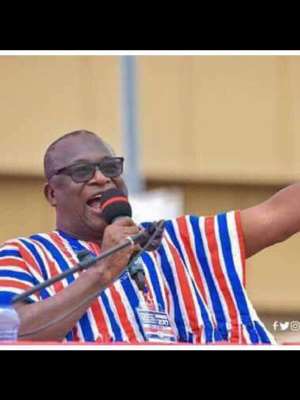 I am making a direct appeal to you to vote for Alhaji Short as the next National Chairman of the NPP. Alhaji Short is currently the Upper West Regional Chairman of the party. He snatched five seats from the NDC and increased the NPP’s share of the presidential vote by 7.38% at the last election. His real achievement was to lift the NPP share of the parliamentary vote from 10% to 45.45% during his time, thus demolishing the NDC's stranglehold on the region. The special significance of this feat cannot be exaggerated. By the time December 2016 came round Alhaji Short had managed to cure the NPP in the Upper West of its narcissistic personality disorder and thereby broadened its appeal beyond the confines of its base. Consequently, he wiped the tears of his leader, Nana Addo Dankwa Akufo-Addo, and mended the broken heart of his party - by stitching 'Dombo' back in place in the Danquah-Busia-Dombo tradition in finally placing the Elephant firmly back in the region which gave birth to the late Chief S. D. Dombo.

Alhaji Short is not going into the contest for national chairman of the NPP as a northerner, or as another northerner, or as the candidate from the north, or as the candidate representing the three regions and the many tribes of the north. Nor is he contesting as an ethnic candidate or a regional candidate. There are no block or caucus or regional candidates in this contest; nor are there tribal or ethnic candidates. Alhaji Short is going into the contest not only as a Ghanaian as well as a loyal and dedicated member of the NPP who has served the party and its leadership faithfully and with distinction, but also as the best-equipped, best-prepared person and candidate to secure the gains of the NPP going towards 2020 and beyond. His stunning success at regional level is worthy of reward. His enormous impact at national level - as a National Executive Committee member, as a National Council member, as a National Disciplinary Committee member, as the chairman of regional chairmen - deserves recognition.

This is Alhaji Short. This is how Alhaji Short presents himself. If another candidate of the chairmanship race or some person acting on his behalf elects to label Alhaji Short as the candidate from the north by drumming a “not another northerner" beat, it will not need Alhaji Short or his team to suggest to the electoral college in particular and the rank and file of the party in general to reject such tribalism and ethnicism within the party. The NPP is one Elephant family and should be seen to act as one family devoid of prejudice and discrimination against its own. No one in the NPP needs reminding that the party is of the Danquah-Busia-Dombo tradition.

I will reiterate for emphasis that Alhaji Short is easily the most qualified candidate for national chairman. Solid achievement lends believability to his promise of delivery. The magnetism of his grassroots appeal has to be seen to be believed. (It must be a potent weapon in the armoury of a national chairman.) And if there is a candidate with a better claim than Alhaji Short to the 'Grassroots Man' designation, let him stand up and show the party how and why. It is not the donkey's years in the trenches as a polling agent, an electoral area coordinator, and at constituency and regional levels, even though longevity has its place. It is the experience longevity brings. It is the expertise experience embellishes itself and evolves into. It is the wisdom experience imbues one with. It is perfecting from practice the art of taking decisions, which is what effective leadership inevitably means. This is Alhaji Short: a man who does not go away to cogitate and ask an army of advisers when quick and tough decisions stand to be made; a man who thinks on his feet. Here is an exceptional regional chairman asking to be more of who he already is. Will you give him the opportunity to be an exemplary national chairman of the NPP?