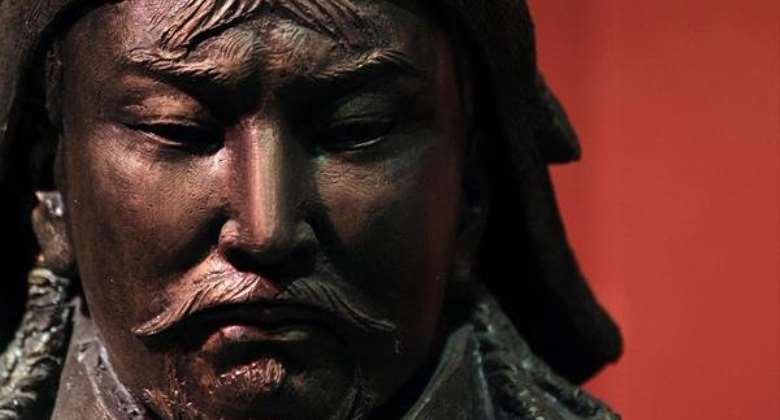 This is an outsized land for outsized legends. No roads, no permanent buildings; just unfurling sky, tufted dry grass and streaming wind. We stopped to drink salted milk tea in nomads’ round ger tents and to snap pictures of roaming horses and goats. Sometimes we stopped just for the sake of stopping â€' Ömnögovi Province, Mongolia, is endless by car. I couldn’t imagine tackling it on a horse.

But this is the country of Genghis Khan, the warrior who conquered the world on horseback. His story is full of kidnappings, bloodshed, love and revenge.

That’s just history. The legend begins with his death.

You might also like:
Where the Earth’s mightiest army roamed
Mongolia’s 6,000-year tradition
A disappearing desert oasis
Genghis Khan (known in Mongolia as Chinggis Khaan) once ruled everything between the Pacific Ocean and the Caspian Sea. Upon his death he asked to be buried in secret. A grieving army carried his body home, killing anyone it met to hide the route. When the emperor was finally laid to rest, his soldiers rode 1,000 horses over his grave to destroy any remaining trace.

Genghis Khan once ruled everything between the Pacific Ocean and the Caspian Sea (Credit: Samuel Bergstrom)

Foreign-led expeditions have pursued the grave through historical texts, across the landscape and even from space â€' National Geographic’s Valley of the Khans Project used satellite imagery in a mass hunt for the gravesite. But most interest in locating the tomb is international; Mongolians don’t want it found.

It’s not that Genghis Khan isn’t significant in his homeland â€' quite the reverse. His face is on the money and on the vodka; he probably hasn’t been this popular since his death in 1227. So it can be difficult for outsiders to understand why it’s considered taboo to seek his grave.

Genghis Khan did not want to be found
The reluctance is often romanticised by foreign media as a curse, a belief that the world will end if Genghis Khan’s tomb is discovered. This echoes the legend of Tamarlane, a 14th-Century Turkic-Mongolian king whose tomb was opened in 1941 by Soviet archaeologists. Immediately following the tomb’s disturbance, Nazi soldiers invaded the Soviet Union, launching World War II’s bloody Eastern Front. Superstitious people might call that cause and effect.

But Uelun, my translator, was having none of it. A young Mongolian with a degree in international relations from Buryat State University in Ulan-Ude, Russia, she did not seem superstitious. In her opinion, it is about respect. Genghis Khan did not want to be found.

One thousand horses trampled the grave of Genghis Khan to destroy any trace (Credit: Samuel Bergstrom)

“They went through all that effort to hide his tomb,” she pointed out. Opening it now would violate his wishes.

This was a common sentiment. Mongolia is a country of long traditions and deep pride. Many families hang tapestries or portraits of the Grand Khan. Some identify themselves as ‘Golden Descendants’, tracing their ancestry to the royal family. Throughout Mongolia, the warrior remains a powerful icon.

The search for Genghis Khan’s tomb
Beyond cultural pressures to honour Genghis Khan’s dying wish for secrecy, a host of technical problems hinder the search for his tomb. Mongolia is huge and underdeveloped â€' more than seven times the size of Great Britain with only 2% of its roads. The population density is so low that only Greenland and a few remote islands can beat it. As such, every view is epic wilderness. Humanity, it seems, is just there to provide scale: the distant, white curve of a herdsman’s ger, or a rock shrine fluttering with prayer flags. Such a landscape holds on to its secrets.

Mongolia is more than seven times the size of Great Britain with only 2% of its roads (Credit: Samuel Bergstrom)

Dr Diimaajav Erdenebaatar has made a career overcoming such challenges in pursuit of archaeology. Head of the Department of Archaeology at Ulaanbaatar State University in Mongolia’s capital city, Dr Erdenebaatar was part of the first joint expedition to find the tomb. The Japanese-Mongolian project called Gurvan Gol (meaning ‘Three Rivers’) focused on Genghis Khan’s birthplace in Khentii Province where the Onon, Kherlen and Tuul rivers flow. That was in 1990, the same year as the Mongolian Democratic Revolution, when the country peacefully rejected its communist government for a new democratic system. It also rejected the search for Genghis Khan, and public protests halted the Gurvan Gol project.

Uelun and I met Dr Erdenebaatar at Ulaanbaatar State University to talk tombs â€' specifically similarities between his current project and the resting place of Genghis Khan. Since 2001 Dr Erdenebaatar has been excavating a 2,000-year-old cemetery of Xiongnu kings in central Mongolia’s Arkhangai Province. Dr Erdenebaatar believes the Xiongnu were ancestors of the Mongols â€' a theory Genghis Khan himself shared. This could mean similar burial practices, and the Xiongnu graves may illustrate what Genghis Khan’s tomb looked like.

Many believe Genghis Khan's tomb could be filled with treasures from across the Mongol Empire (Credit: Samuel Bergstrom)

Xiongnu kings were buried more than 20m underground in log chambers, with the sites marked above ground with a square of stones. It took Dr Erdenebaatar 10 summers to excavate the first tomb, which had already been hit by robbers. Despite this, it contained a wealth of precious goods indicating the Xiongnu’s diplomatic reach: a Chinese chariot, Roman glassware and plenty of precious metals.

Dr Erdenebaatar took me to the university’s tiny archaeology museum to see the artefacts. Gold and silver ornaments were buried with the horses sacrificed at the gravesite. He pointed out leopards and unicorns within the designs â€' royal imagery also used by Genghis Khan and his descendants.

Many believe Genghis Khan’s tomb will be filled with similar treasures gathered from across the Mongol Empire. It’s one reason foreign interest remains strong. But if the Grand Khaan was buried in the Xiongnu style, it may be difficult â€' if not impossible â€' to know for sure. Such a tomb could be hidden by simply removing the marker stones. With the main chamber 20m down, it would be impossible to find in the vastness of Mongolia.

When I asked Dr Erdenebaatar if he thought Genghis Khan would ever be found, he responded with a calm, almost indifferent, shrug. There already aren’t enough lifetimes for his work. History is too big.

A possible lead in a forbidden location
Folklore holds that Genghis Khan was buried on a peak in the Khentii Mountains called Burkhan Khaldun, roughly 160km north-east of Ulaanbaatar. He had hidden from enemies on that mountain as a young man and pledged to return there in death. Yet there’s dissent among scholars as to precisely where on the mountain he’d be â€' if at all.

Legend has it that Genghis Khan was buried in the Khentii Mountains (Credit: Peter Langer/Design Pics Inc/Alamy)

“It is a sacred mountain,” acknowledged Dr Sodnom Tsolmon, professor of history at Ulaanbaatar State University with an expertise in 13th-Century Mongolian history. “It doesn’t mean he’s buried there.”

Scholars use historical accounts to puzzle out the location of Genghis Khan’s tomb. Yet the pictures they create are often contradictory. The 1,000 running horses indicate a valley or plain, as at the Xiongnu graveyard. Yet his pledge pins it to a mountain. To complicate matters further, Mongolian ethnologist S Badamkhatan identified five mountains historically called Burkhan Khaldun (though he concluded that the modern Burkhan Khaldun is probably correct).

Theories as to Genghis Khan’s whereabouts hang in unprovable limbo

Neither Dr Tsolmon nor I could climb Burkhan Khaldun; women aren’t welcome on the sacred mountain. Even the surrounding area was once closed to everyone but royal family. Once known as the Ikh Khorig, or ‘Great Taboo’, is now the Khan Khentii Strictly Protected Area and a Unesco World Heritage site . Since achieving this designation, Burkhan Khaldun has been off-limits to researchers, which means any theories as to Genghis Khan’s whereabouts hang in unprovable limbo.

Honouring a warrior’s final wish
With the tomb seemingly out of reach, why does it remain such a controversial issue in Mongolia?

Genghis Khan is simply Mongolia’s greatest hero. The West recalls only what he conquered, but Mongolians remember what he created. His empire connected East and West, allowing the Silk Road to flourish. His rule enshrined the concepts of diplomatic immunity and religious freedom. He established a reliable postal service and the use of paper money. Genghis Khan didn’t just conquer the world, he civilised it.

Genghis Khan didn’t just conquer the world, he civilised it

He remains to this day a figure of enormous respect â€' which is why Mongolians like Uelun want his tomb to remain undisturbed.

“If they’d wanted us to find it, they would have left some sign.”

That is her final word.