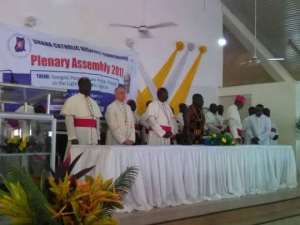 Most Reverend Philip Naameh, President, Ghana Catholic Bishops' Conference (GCBC) and Archbishop of Tamale has observed that the concept of bride price in the country had been taken out of its original traditional context and becoming increasingly monetarized.

He said consequently, the expense of marrying 'properly' according to traditional rules had become burdensome for the average man seeking the hand of a woman in marriage.

Archbishop Naameh made the observation at the opening of this year's plenary assembly of the Ghana Catholic Bishops' Conference in Ho on the theme, 'Integral Pastoral Care for the Family in the light of Amoris Laetitia.'

He said coupled with that, was the confusion surrounding the ceremony of traditional marriage, which 'properly subsists' in the exchange of gifts in a ceremonial meetings of the parties and their extended families, now known as engagement, occasioning duplication of rites and costs.

Archbishop Naameh said the practice was distorting the relationship between the character of traditional and church marriage and called for an 'inculturation of Christian marriage in the Ghanaian church to preserve a more reflected convention of culture and faith.'

He also called on government to partner the church to provide affordable housing packages to young couples, especially families with disabled children to keep peace, unity and love in the family and charged churches to show love to homosexual unions.

Archbishop Naameh said though individuals engaged in such marriages which did not satisfy God's intention for creating man and woman, they could not be deprived of God's love.

'Homosexuals are human beings. They are our relations,' so, '…the way of the Church is not to condemn anyone forever; it is to pour out balm of God's mercy on all those who ask for it with a sincere heart…For true charity is always unmerited, unconditional and gratuitous,' he stated.

Archbishop Naameh also noted that fixation on sexual functionality among the youth and the desire to be 'sexy' were compelling middle-aged men to abuse advertised alcoholic beverages, which was leading to collapse of marriages as a result of dissatisfaction with sexuality between partners.

He said most troubling was the long standing traditional stigma associated with infertility and the absence of biological children in marriage and called for 'pastoral care and support' for such families, saying, 'Let's be merciful and sympathetic when we encounter families that are not ideal'.

Dr Archibad Yao Letsa, the Volta Regional Minister, in a speech read on his behalf, commended the Catholic Church for its 'impressive' contributions to the development of the Volta Region and Ghana.

He said government was dependent on the Church to spearhead the revolution for moral and social transformation in the country because the moral decadence in society was continuously worsening.

Dr. Letsa said families and the Church were the basic units of society and charged them to take bold measures to nip the social cancer of indiscipline in the bud.

Archbishop Jean Marie Speich, the Apostolic Nuncio to Ghana, urged the Church to respond to challenges being faced by families and not just lament about the situation.