Otiko Grilled Over Sex For Job 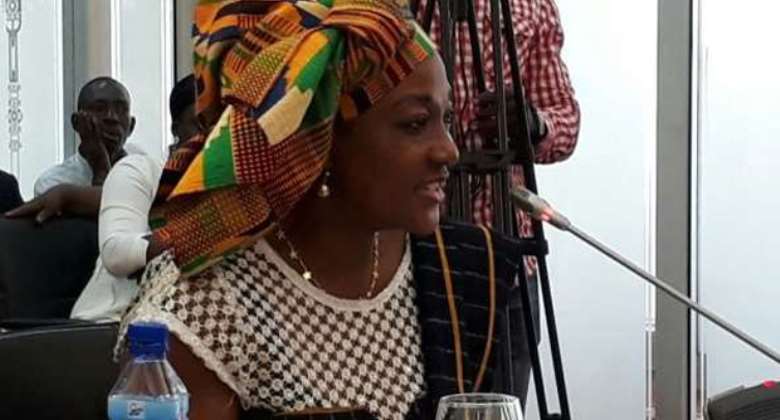 The Minister-designate for Gender, Children and Social Protection, Otiko Afisa Djaba, yesterday came under a barrage of questions from the minority National Democratic Congress (NDC) members on the Appointments Committee.

It was in connection with her alleged endorsement of a statement purportedly made by Kennedy Agyapong to the effect that the current Electoral Commission (EC) chairperson, Charlotte Osei, exchanged sex for her appointment by former President John Mahama.

The NDC members on the committee therefore decided to block her appointment when they recommended for her rejection at the committee level, but Otiko scaled through by a majority decision.

The two other nominees, who were also vetted, Dr Anthony Akoto Osei for Monitoring and Evaluation and Dan Kwaku Botwe for Regional Reorganisation, were unanimously cleared.

The MP for Hohoe, Dr Bernice Adiku Heloo, started the 'inquiry' by asking Otiko – NPP Women's Organiser – to clarify her position on the matter after being reported in the traditional and social media that she had subscribed to a purported statement questioning how the position of the chairperson of the Electoral Commission was given to Charlotte Osei.

The MP for Tamale North, Suhuyini Alhassan Sayibu; MP for North Tongu, Samuel Okudzeto Ablakwa and the Minority Leader, Haruna Iddrisu, joined in and continued in the same vein, pinning the nominee to the wall to tell Ghanaians why as a woman she could support such a statement.

But the nominee, Otiko Djaba, said she never supported any such statement by Kennedy Agyapong, who is the New Patriotic Party (NPP) Member of Parliament for Assin Central.

According to her, what she said was that if such a statement was coming from Mr Agyapong then the matter ought to be investigated for the truth or otherwise to be established and for the EC boss' name to be cleared.

She told the committee that as a victim of such circumstances, she would never support such a statement and that she only wanted the truth to be unraveled for the sake of the EC boss' credibility.

According to her, her comments might have been mischievously interpreted for political gain and that her real comments had been captured by Ghanaweb and therefore if members of the committee still doubted her they could google Ghanaweb news and verity for themselves.

'Wicked Mahama'
The Minster-designate for Gender was also impressed upon by the minority members on the committee, led by Haruna Iddrisu, to withdraw certain comments attributed to her on a campaign trail which sought to impugn the integrity of former President John Mahama.

She was accused of saying on various political platforms before the elections that former President Mahama was a wicked leader, a liar, a disgrace to the people of the North and also has the devil's heart; but the nominee said she was not going to withdraw those comments she made on political platforms.

She said she owes no apology to Mr Mahama for the very critical comments she made about him.

Otiko Afisa Djaba said she took the former Ghanaian leader to task because they both hail from the same region and she has the right to subject his actions to critical scrutiny.

“The president is my brother and I spoke from my conviction,” she told the MPs.

She explained that she described the former president with those words in specific contexts and that he could be criticized as a leader of the country.

According to Madam Otiko Djaba, she described the president with those words because of the way he managed the country and the economy, bringing a lot of hardships to Ghanaians.

“The former president promised to reduce fuel and utility prices. He also promised to put money in people's pockets; and the failure of the Savannah Accelerated Development Authority (SADA) made me to describe him with those words which I think are not insults.”

“People have died for the country and we at this time must work and continue from where they left off, and, so for me, the president has been like Caesar's wife and the issue of SADA affected me personally and the people of the north.”

“If you look at the results of the elections, it is an indicative of how the people of the North felt. It is not an excuse to say that other people let him down, because he was the president – the president of Mother Ghana – and at times I felt he was the emperor without clothes; and there was the need to draw his attention to it.”

On the payment of arrears of the school feeding programme, the nominee said that the payment had been outstanding for three months – from November, 2016 to January, 2017 – and that the necessary arrangements had been made for the caterers to be paid in the next two weeks.

She said the NPP intends to expand the coverage of the school feeding programme from the current 1.6 million school children to three million  in the first term of Nana Akufo-Addo's regime  to help provide more jobs to women in the catering services industry and also to help boost school enrolment.

She also noted that the new contracts given under the school feeding programme by the previous government would be reviewed and the processes made more open by advertising for such contracts for all qualified people to bid for.

Policing
When the Minister-designate for Monitoring and Evaluation, Dr Anthony Akoto Osei, took his turn at the vetting, he clarified his role as the minister who would be in-charge of monitoring and evaluation in all the sector ministries.

He said per his job description, he would be policing his colleagues.

This, he said, would ensure that government machinery works in “efficient, effective and timely” fashion.

The president, he told the committee, promised Ghanaians a change and “If we are going that way…then it's not going to be business as usual.”

Dr Akoto Osei said he would be a cabinet minister and that he intends to have a technical staff to assist him.

Answering a question on a possible role duplication with the Senior Minister, Yaw Osafo-Maafo, Dr Akoto Osei said  Osafo-Maafo's role would be to coordinate the economic sectors.

He said his role is carved in such a way that “there won't be any conflict.”

“My job is partially to police my colleagues,” the former minister of state in the previous New Patriotic Party (NPP) administration said.

According to him, this has become necessary because President Akufo-Addo wants to deliver on his promises to the people of Ghana.

He told the committee that as a result of his former position as a minister at the finance ministry, he has a fair idea about the inter-sectorial operations of almost all the ministries and that he would be able to effectively carry out the monitoring and evaluation of all the programmes that would be embarked upon by the various sector ministries.

He told the committee that he would put in place a technical support team to assist him in his work so as to be very effective on the ground.

He said he would be giving more advice to sector ministers as to how certain targets could be achieved and that he would also ensure that Key Performance Indicators at the various levels are highlighted and met.

He said his work as a Minister for Monitoring and Evaluation would be a complementary one to help get the results needed to meet the policy objectives of the NPP government under President Nana Akufo-Addo.