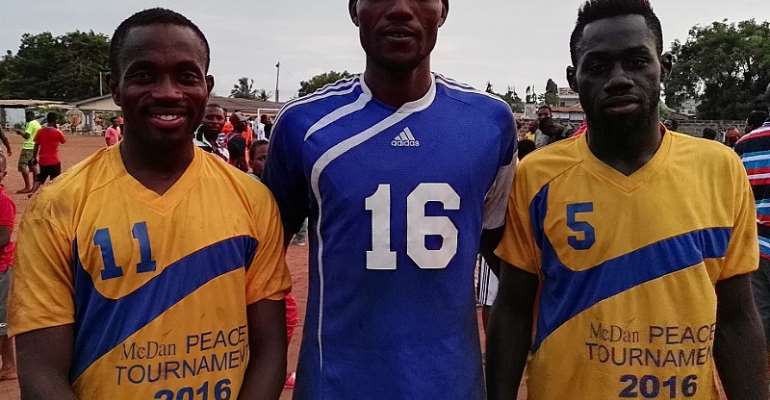 All roads lead to the La Salem Park on Friday December 2, 2016 when the finals of the exciting 2016 McDan Peace Football Tournament comes to the climax with two team representing La in the final.

La Kakramadu will face La Court in the crucial final, and it will be an action packed final judging from previous games that have seen real competition and fairplay in football.

So far, it had been an exciting tournament invented by one Mr. Adjetey Adjei aka Dormon.

All the eight participating teams received an appearance fee of hundred and fifty cedis, jerseys and balls. The winning team will take home $1,000, a giant trophy plus medals with the runners up going home with $500 plus medals, while the player who scores most goals (Goal King) as well as displays and excites the fans (Best Player) will take five hundred cedis each.

Dr. Daniel McKorley, CEO of McDan Group of Companies, a sports enthusiast, philanthropist and peace lover who believes in peace is sponsoring the tournament which has been attracting big crowd everyday there is a game.

He has urged Ghanaians to practice and preach peace so that people will understand each other and not fight or insult during the elections. “We cannot kill ourselves just because of elections” he expressed.

Dr. Mackorley advised people to vote early, but leave the polling station and go and do something profitable, when it is time for the results, they can go and listen and live in peace again.

He said sports is a tool for development, so he decided to support the organization of the Peace Match to entertain and educate people of La Dade Kotopon.

The two semifinals saw the attendance of Parliamentary Candidates of the NDC Hon. Nii Amasa Namoale and Vincent Sowah Odotei of the NPP.

The two strong contenders for the La Dade Kotopon seat in Parliament have been invited to grace the grand finale.

Players of La Court and La Kakramadu want to impress their fans, so there is much at stake, like bragging rights and the tag of best team and best player.

So far, Ben Asare, goalkeeper of La Court has pulled some dramatic saves in the penalty shootout and has won the hearts of many spectators.

Adjetey Adjei aka Dormon congratulated the fans and supporters for their discipline and urged the finalists to put up a good show as they may earn call ups to bigger clubs as reports reaching yours truly indicate that some scouts have been monitoring the matches.

EC Yet To Receive Summons Against Voter Registration In Scho...
4 hours ago