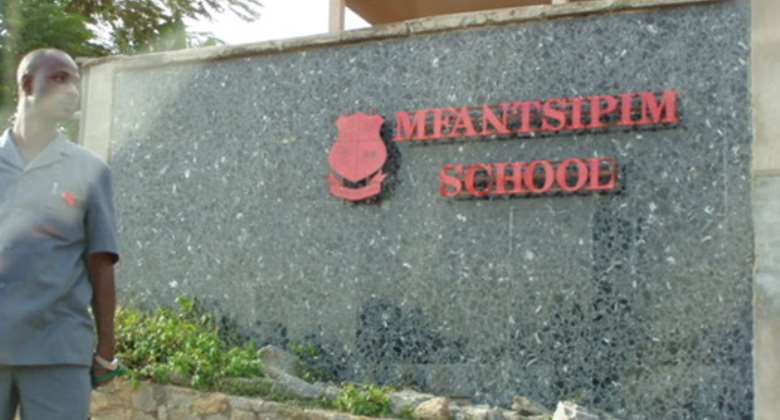 “In a few years, the people of this country will be amazed at the number of its influential citizens who owe allegiance to this School… This School rarely forgets that its foundations are built on the Rock of Ages and its inspiration is the Son of God. Religious instruction is given here with all the enthusiasm and power at our command….Our people are not plaster saints, but every boy in the School knows that our allegiance is given to Jesus Christ and some of them recognise His right to rule their lives. If their service is more faithful because of what they learned in this School, then for that alone and for that supremely our work will be justified”.

Mfantsipim is 140 years old this year. Mfantsipim is the oldest senior high secondary school in this country. So Mfantsipim represents 140 years of senior high school education in this country. Mfantsipim is an all-boys educational institution, (for some few years Mfantsipim admitted girls from the Wesley Girls High School into its sixth from programme, the likes of Mrs. Prof. Florence Dolphyne and Mrs. Sylvia Boye) established in 1876 to operate at the secondary level, founded and nurtured by the Methodist Church and dedicated to fostering intellectual, moral and spiritual growth. Its foundation name was Wesleyan High School. The first Headmaster was James Picot, a French scholar, who was only eighteen years on his appointment. His academic standard was limited to the College of Preceptors Certificate, perhaps equivalent to the Ordinary Level School Certificate of the West African Examinations Council. He had not more than two years of teaching experience in French. Wesleyan High School had a change of name to Wesleyan Collegiate School before the end of the 19th century.

The name, Mfantsipim, was provided by the Honourable John Mensah-Sarbah, an accomplished lawyer and a member of the “pioneer boys”. Mfantsipim, he insisted, was to be “the soul of the people”. John Mensah Sarbah was political leader in the Aborigines Rights Protection Society which was heir to the Fante Confederation. It was the Rev. A.W. Parker, who, together with John Mensah-Sarbah, read the proclamation on 31st July, 1905. The founding fathers of Mfantsipim desired that the School should inculcate in its boys mental discipline, mental honesty, moral courage and above all, the character which is worthy of the Christian foundation of the School.

The academic achievements of Mfantsipim over the past years have been proverbial. As rightly predicted by Rev. Lockhart, the name Mfantsipim has been associated with excellence in all fields of academic work, and one cannot mention a single area where an Old Boy has not distinguish himself at both the nation and international levels. The record of Mfantsipim is replete with the achievements of the School and of its students which exemplify those founding qualities as pronounced by the founding fathers of fostering intellectual, moral and spiritual growth, but of course, it would certainly be disingenuous to suggest, and it is not suggested that every student passing through Mfantsipim becomes automatically imbued with this combination of qualities.

Mfantsipim holds up constantly to its present pupils and old boys in their service to the country, the Christian ideals of its founding fathers. As stated by the late H. V. Acquaye-Baddoe, the centenary Headmaster during the centenary celebration 1986: “Religious education means more than preparing students to pass their examination in the Bible Knowledge; it should aim at bringing up the child to uphold virtues like truth, humility, honesty, service, sacrifice and devotion to duty. Students of Mfantsipim, past and present, owe a great debt of gratitude to the Methodist Church for ensuring that these ideals are maintained in the School. Despite the social forces which tend to raise doubts as to the influence of God on individual lives, Mfantsipim will instil into its boys the fear of God as fundamental to success in life.”

During the 140 years of its existence, “The School” as is fondly called by the Old Boys, has been sustained throughout its history by patriotism, goodwill and the spirit of sacrifice of its founding fathers and successful generation of Old Boys. The Mfantsipim Old Boys Association, popularly known all over the country as MOBA, the society which brings all old students together under one umbrella, is not just an Association of boys who have passed through the walls of the School. The Association has a reputation for its contribution towards the development of the School through financial assistance and in other ways. It was in the days of administration of Mr. F. L. Bartels, the first African Headmaster, that the Old Boys sponsored post-graduate courses abroad for some members of staff

The 140 years of existence of Mfantsipim was celebrated with a full year's programme laid down by MOBA and the School authorities with involvement of the Methodist Church. The 140th anniversary programme itself was preceded by an induction service into office of the newly elected National Executive Committee (NEC) on Sunday, July 26, 2015 at the Calvary Methodist Church, Adabraka. The NEC is headed by the Abusuapayin (the President) Capt. Paul Forjoe ably supported by E. Kotey-Hammond, Vice-President, K.B. Coleman, General Secretary, J.B.K. Morgan, Vice-Secretary, W. P. Aboagye, Treasurer, Kofi Amaniampong, Vice-Treasurer, Charles Cobbina, Organiser, Kwesi Wilson, Vice-Organiser and Kwame Gyasi, Executive Member.

The anniversary programme itself was launched during MOBA National Conference on Saturday January 23, 2016 at the Kofi Annan International Peace keeping Training Centre, Teshie. The activities lined up included the breaking of grounds and sod cutting for projects meant to benefit the School, the teachers and the students, Special Thanksgiving Service, the maiden edition of MOBA Annual Engagements Series in the form of a symposium with the topic: “Advancing Ghana's Progress Through Effective Professionalism Thinking and Looking Ahead – Dwen Hwe Kan”,the annual Fund-Raising Dinner Dance, Fun Games and Debates and the mother of all the activities, the Speech and Prize-Giving Day which obviously takes place on the Kwabotwe Hill, Cape Coast.

The Annual Speech and Prize-Giving Day of Mfantsipim has been established as a very important tradition in the history of the School. This highly regarded ceremony had its humble beginnings in 1908. It was initiated by the Rev. W.T. Balmer, after thirty-two years of the founding of the School. This annual ceremony has since become the single-most important event in the life of the School. The ceremony provides an opportunity for both the School and Old Boys of the School to give an objective account of the performance of the School and the contribution of Old Boys to the School, through the speeches delivered by the Chairman, Guest Speaker, and Guest of Honour who by established tradition belong to the 40 year, 30 year, and 50 year Old Boys Groups respectively and the Headmaster, the Head Prefect and at times the Special Guest of Honour. During the occasion, the successes and failures of the School in all fields of human endeavour, ranging from academic to sports as well as what Old Boys have been doing as citizens in this country and in the world, are recounted.

These days, the occasion, apart from providing a momentous homecoming for Old Boys and members of their families and friends to congregate to reminisce about the past, pronounce their thoughts about the School, share experiences, make promises for the future and enjoy a healthy reunion, provides opportunity for prizes to be awarded to deserving students for excellent academic work, and to members of staff for hard, exemplary and dedicated service to the School. Two other important events have also been added; a fund raising activity which allows Old Boys to freely and openly express themselves by making generous contributions in form of cash and kind towards the academic, physical and moral wellbeing of the School and the holding of a Dinner/Dance to kick start the entire ceremony.