By EMBASSY OF GHANA, WASHINGTON, DC 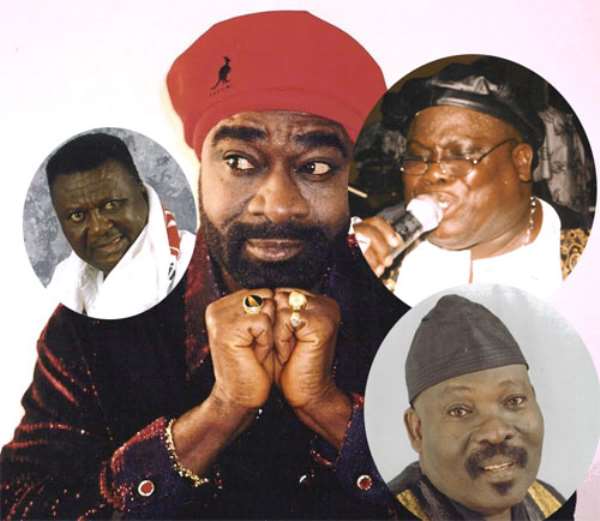 Four Ghanaian musicians, Paapa Yankson, Jewel Ackah, Pat Thomas and A.B. Crentsil will perform at the Ghana Embassy Independence Day celebration at the Chancery in Washington,DC on the evening of Friday March 4, 2005.

The celebration, which precedes the actual March 6 annual observation in Ghana will be the first time that the four -star -band will be together at the Chancery.

According to a press release by the Minister Counselor and head of public affairs, Mr. Ivor Agyeman-Duah, the musicians who are already in Washington, DC by special arrangement between "Imagine That" promotions and the Embassy called on Ambassador Fritz Kwabena Poku on Wednesday.

In a very informal chat particpated by the Deputy Head of Mission, Mr.Isaac Aggrey, Minister Counselor-Consular, Joseph Ackon and Mr. Agyeman-Duah, Ambassador Kwabena Poku said the public affairs department would research and together with the United States law enforcement agencies, look into abuse of intellectual property rights, which the stars complained was draining them economically in the United States and elsewhere.

The United States, Ambassador Poku said, " is a champion in fighting against copyright abuse and other forms of intellectual property violations " and that the research findings and possible collaboration with the American authorities would later be made known to them, their parent associations and the Government of Ghana.

As he wlecomed them to his office before a tour of the Embassy, he also commended them not only for their talents but ability to overcome rivalry and perform as a team. The independence of Ghana, the Ambassador said, was born in that spirit and the Embassy under the current Government's dispension would always open its doors to Ghanaians.

After their first performance on Friday, the stars will also travel to New York ( March 12) Chicago(March 19) Atlanta (March 23) and Texas(April 2) for similar performances.