“Are the ‘MTTU’ of the Ghana police service toll booth attendants”? 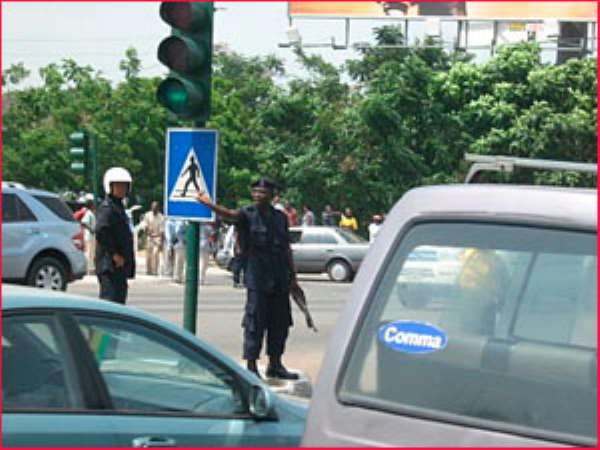 Does democracy reduce corruption? The answer may not be obvious. From the perspective of a political scientist not as a journalist there is a debatable conflictual on the one hand and consensual analysis with respect to the proper comprehension of the nexus between the Ghana highway authority and the Ghana police service.

The African polity has been stereotyped for a loner period as a monolithic place bedeviled with conflicts, poverty and hunger, corruption and other unpleasant situations. It’s quite obvious that these unhealthy stereotypic characterization are conspicuous since the epoch of decolonization. In a critical sense massive immorality in public services has caused Africa’s developmental retrogression as debated among several scholars. Due to this a new paradigm, thus restoration of constitutional democracy would help eradicate all sorts of corrupt practices and help promote sustained socio economic developmement.So in 1992, Ghana made an attempt for the fourth time to embrace constitutional rule. This projects that there is a constitution that stipulates clearly the various clear cut provisions and procedures that provide directives as to how the nation is supposed to be managed. This also means that all things should be done in accordance with the constitution as the fundamental law of the land.

This article makes issues clear with respect to the fact there has been an institutionalized de-facto procedure or duty that has been added to the MTTU, department of the Ghana police service. This article makes an investigative analysis in to this dimension. Due to this, the first phase of this article identifies and brings to light the nature and duty of the MTTU. The second phase captures briefly the Ghana highway authority and its toll booth establishment. This phase will be very relevant as to identify whether there has been a delegation of some functions of the Ghana high way authority to the MTTU.The third and final face of this article establishes a nexus between the operation of toll booth in the country and the MTTU as the Atwima Nwabiagya Abuakwa-Nkawie stretch of the Bibiani highway is brought in context. We finally draw conclusions to the brief opinion.

THE “MTTU” DIVISION UNDER THE GHANA POLICE SERVICE:

The MTTU as an acronym stands for motor traffic and transport unit. The MTTU is a division under the Ghana police service. It was formally known as the Ghana police traffic unit (GPTU), which was responsible for all road safety issues in the country. The unit was established and became part of the police service as far back as 1952. The modus operandi (mode of operation) of the MTTU differs from that of other divisions in the Ghana police service. The MTTU personnel wear white tops and caps. More importantly, the MTTU performs several functions that are very relevant to the nation Ghana. Some of these functions are;

*educates the public about the accident precautions.

Some of the department under the MTTU are traffic, accident investigation, and training and education unit.

The Ghana highway authority was established as a body corporate by GHA decree 1974(NRDC 298). This was repealed by the GHA act 1997(act 540) which was charged with their responsibility to ensure the total administration control and development and maintenance of the country’s trunk roads road network.

The TOLL BOOTHs in this article are the various checkpoints (stationary) where road users (vehicles) halt and pay an amount of money to the attendants at these established chekpoints.The amounts of money collected are plugged by the governments as revenue to be used for road management.

CONSTRUCTING A NEXUS BETWEEN MTTU AND GHA: alternative MTTU toll booth attendants on the Abuakwa-nkawie stretch on the Kumasi Bibiani highway (critical and illegal establishment)

Both the MTTU and the GHA have a relational function. They both ensure transportation is in a healthy state. As the former ensures that vehicles are in good shape the latter collects revenue for the government to be used to maintained road networks. Apart from this the MTTU is not charged with the responsibility of taking money from road users but the Ghana highway authority with its toll booth establishment rather are responsible for the collection of money from road users.

A question that can be raised is that, has the Ghana highway authority delegated some of their powers to the MTTU???????? The answer is a big NO. So therefore why do the MTTU officers take money from road users????

What is so disheartening is that young recruits are experts in such unhealthy activity. I wonder if they are trained in that manner.

The Ghana police service who fights crime and other illegal activities are wallowing in such filth. The credibility of the service nowadays has very low as people lay invectives and abusive languages and sometimes curses on police officers. The deputy Ashanti regional police commander ACP Ampofo Duku opined that the MTTU is the most corrupt division in the Ghana police service. (Ghana web 25 April 2016.

CONCLUSION AND DISCUSSION
There is corruption and other unhealthy activities among the MTTU of the Ghana police service. These officers have established an institutionalized de-facto alternative toll checkpoints as they collect money from road users and neglect their duty. On the 8th of august I witnessed this scene as the police offer who surprisingly was a lady bargaining and arguing with a driver whose vehicle insurance had expired and had no license on the Abuakwa –Nkawie stretch of the Kumasi –Bibiani highway. Finally the driver paid her off. What is wrong with police service? The Ghana highway authority should explained to the people of Ghana if there has been delegation of some its powers to the MTTU with respect to the collection of money at the police checkpoints.

The Atwima Nwabiagya Abuakwa-Nkawie stretch of the Kumasi –Bibiani highway MTTU officers are engaging other activities that should be the work of toll booth attendants employed by the Ghana highway authority. This article is an exposure of the unhealthy activities undertaken by these MTTU officers on the highway. There is massive corruption on the highway.

Ghana and Africa at large suffers developmental retrogression and stagnation due to massive corrupt practices such as the MTTU officers avoiding their responsibilities and turning their appointments into business of money making.

There should be immediate review of the various activities by the superiors of the MTTU in order to hold these bad nuts culpable and deal with them accordingly…..

Is it because of the economic hardships that have caused negligence of duty and thus embrace highway corruption? What’s then is the difference between an armed robber who stops car violently and extorts monies from passengers and a well-trained MTTU police officer who stops vehicles and takes money from drivers????

The Abuakwa-Nkawie stretch of the Bibiani highway has been turned into toll booth checkpoint by the MTTU.

The MTTU officers on this highway are very corrupt. Once again this article is an exposure to alert the police service superiors to take immediate action with respect to this corrupt activity which is contradictory to the code of conduct of the Ghana police service.