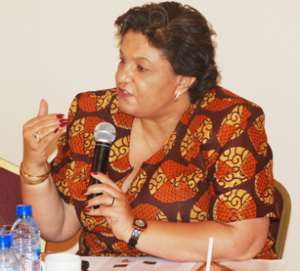 I will not demand her immediate resignation because she is no worse than the rest of the hoodlum pack that goes by the political label of the Mahama cabinet. If anything at all, it is her boss who deserves to be resoundingly accorded the boot. I am here, of course, talking about Ms. Hanna Tetteh, the half-Hungarian Foreign Minister of Ghana. Not that it really makes much of a significant difference whether Ms. Tetteh were a full-blooded Ghanaian or not.

I, for example, am a naturalized American citizen; it was a conscious and wistful decision for me to make (I still have my old Ghanaian passport somewhere in one of my closets). But in view of the benighted decision by Chairman Jerry John Rawlings and the rest of the Trokosi Robber-Baron Nationalists to turn Ghana into a veritable Banana Republic, and a blood-curdling one at that, I had absolutely no choice but to move on with my life via a much healthier direction. And I have not regretted my decision one bit, particularly as I have watched the country in which I was born and bred literally and steadily revert to the state of nature.

Indeed, I feel as American as apple pie, as the cliché goes. But, of course, on any given day, you can bet your proverbial bottom-dollar that a full-half of my soul has “Ghana” written all over it. You see, what keeps me on my toes, as immutably grateful as I am to be recognized and accepted as an American citizen, nevertheless, is the perennial paradox that as an African-born American black man, the overwhelming majority populace of the United States has yet to come to terms with the need for the full and unreserved acceptance of the ethnic minority as a bona fide American citizen. It is this age-old dilemma of the American-born African that Dr. W. E. B. Dubois alluded to in his geopolitical and cultural classic Souls of Black Folk (1903) as the psychically wrenching “Double-Consciousness” of the Diasporic African.

Hanna Tetteh may just well be morbidly afflicted with this kind of psychical and/or psychological dilemma, as I believe also is the case with Chairman Jerry John Rawlings who once bitterly and tearfully complained to the legendary U.S. television journalist Ms. Diane Sawyer about having been callously abandoned by his Scottish Highland father, Mr. John. You see, ever since Ms. Tetteh picked that patently infantile fight with the recently departed U.S. Ambassador to Ghana on her Facebook page or wall, the dear reader may choose his/her pick, I have not taken her seriously. And then just the other day, we had her huffing over the fact of the media’s having widely reported a birthday payola that she shamelessly took from the Chinese Ambassador to Ghana, in the form of the construction of a high school building in her Senya-Braku constituency in the Central Region.

Well, she can’t convincingly deny the fact that it was a flagrant act of “Diplomatic Bribery,” because that was exactly what her benefactor told the media, in Ms. Tetteh’s presence, at the handing over ceremony which also happened to be her birthday. Ms. Tetteh would shortly acknowledge that, indeed, she had specifically made such an appeal. More appropriately speaking, it was an importunate demand. Whatever happened to the self-dignity of the Ghanaian politician even amidst grinding poverty? It is almost as if we have been cursed with an inexplicable return to the original state of humans. I weep for Ghana.

And now having vehemently and pontifically defended the inescapably, as well as inexcusably, lame-brained decision by President John Dramani Mahama to accept for temporary resettlement two of the most dangerous inmates from the Guantanamo Bay Maximum-Security Prison, Ms. Tetteh would now have Ghanaians know that she had been kept out of the loop by her much-rumored boyfriend as a direct result of her portfolio’s have been defined as one that excluded highly sensitive national security matters (See “I was not Privy to some Discussions in Gitmo Detainee[s’] Transfer – Hanna Tetteh” MyJoyOnline.com / Ghanaweb.com 1/14/16).

Like the so-called National Democratic Congress’ Communication Team Member Mr. Abraham Amaliba, Ms. Tetteh would also have Ghanaians believe that the executive type of presidency adopted by Fourth-Republican Ghana and enshrined in our constitution does not make Mr. Mahama personally accountable to the people on such a highly sensitive security matter as the reckless importation and transplantation of the two high-grade Gitmo Arabo-Muslim terror suspects in their midst. In other words, Ghana’s executive presidency makes Mr. Mahama the practical equivalent of “Daddy Knows Best.”

Maybe Ms. Tetteh may want to take a political science course in the functional dynamics of such advanced executive presidencies as pertain to France and the United States, in order to be able to conduct a more intelligent and constructive analysis of hot-button issues as such as the one currently in dispute. An Nkrumah-type of executive presidency, maybe?