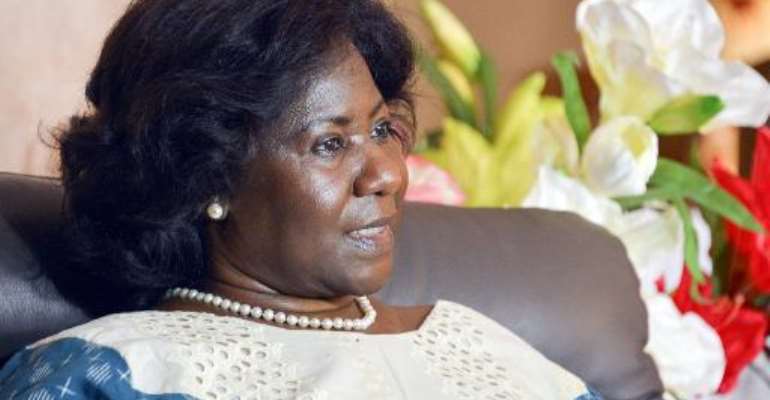 Mariam Sankara, widow of former president Thomas Sankara, known as the father of the revolution in Burkina Faso, talks to AFP in Ouagadougou on May 20, 2015. By Ahmed Ouoba (AFP)

"I haven't given up, I won't give up until the truth is known," the 62-year-old told AFP in a rare interview during a visit to Paris.

The widow of the revolutionary former army captain, who launched an ambitious anti-imperialist programme for social and economic change during his four years in power, has lived in exile in Montpellier, southern France, since 1990.

Sankara, who famously changed the name of the former French colony from Haute-Volta to Burkina Faso ("Land of the Upright"), was ousted in a coup led by his former brother-in-arms, Blaise Compaore.

Sankara and 12 others were killed and hastily buried during the coup in circumstances that still remain unclear.

This week, Mariam Sankara travelled to Paris to ask French lawmakers to launch a parliamentary inquiry into the circumstances of her husband's death.

Several Western and African countries, including the United States, France, Libya, Ivory Coast and Liberia, are rumoured to have had a hand in the ouster of the man dubbed Africa's "Che Guevara".

But for years the mere mention of his name was like a red flag to authorities in Burkina Faso, where calls for an investigation into his death were summarily dismissed.

Desperate to keep the case in the public eye despite the blackout, Mariam Sankara filed a criminal complaint against persons unknown in 1997.

But it took the ouster of Compaore, after 27 years in office, by demonstrators waving pictures of ex-president Sankara in October 2014 for the case to gather momentum.

In March, the transitional authorities of the west African state finally launched an investigation into his death.

Mariam Sankara was questioned in connection with the case in May -- a watershed moment for the former first lady.

"I had the impression that the magistrate really wanted to get to the bottom of the affair. I only hope it goes well," said the round-faced widow in a colourful kaftan with a matching head wrap.

As part of the investigation, Sankara's remains were exhumed in late May, together with those of his fallen comrades.

Apart from identifying the bodies, the operation aims to determine their cause of death, "because we were given certificates saying they died of natural causes," Sankara said.

"France has been cited as a possible accomplice in the assassination. If we open the archives we would know who is responsible," she said, her voice calm but determined.

"It is in the interest of France, Burkina Faso and all Africa that the truth be known".

Chirac and Sarkozy both replied with pledges to avoid any further French meddling in Burkina Faso's affairs. Hollande has yet to respond, she said.

She hopes that French deputies will accept her request for a parliamentary inquiry, but acknowledges it will be "difficult" -- two previous such requests from Burkina Faso lawmakers having gone unanswered.

Sankara received a hero's welcome on her return to Burkina Faso in May for the exhumation of her husband's grave, but the retiring ex-first lady insisted she had no political ambitions herself.

"I don't see myself in a political role," she said, noting that Sankara supporters already had a candidate for president in October elections in Benewende Sankara, who is no relation.

But she has registered to vote and might campaign for the other Sankara. She is also mulling thoughts of a permanent return.

"I will go back to Burkina some day. My mother is there, my brothers are there. I will return," she said.

Her two sons, Philippe and Auguste, who are now in their thirties and living in the United States, might join her there, she says.

"They are Burkinabe, we all remain Burkinabe."

Joblessness, indebtedness to the tune of 80% of our GDP frig...
51 minutes ago