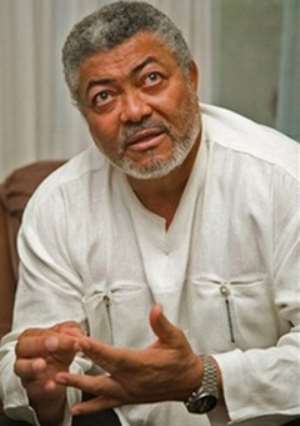 It is with great worry that I remember the ideals that propelled you into the politics of 4th June 1979, AFRC (Air Force revolutionary Council), and, 31st December 1981, PNDC (Provisional National Defence Council). Your Excellency, those ideals were an inspiration to all until Ghanaians and foreigners, alike, discerned the real agenda of blood shedding and notoriety your junta was ascribed with.

In 1979, you killed many people for causing grave financial losses to the State. In fact, the three months of madness that you unleashed on innocent people was horrendous and downright terrorism. I remember, clearly, that a travel ban was imposed on the whole nation to the extent that one had to obtain a pass from Burma camp if they needed to travel and our case was no different. My father had to secure same for our travel as he feared for our lives. Then, the dollar was equivalent to GHs 5 (mind you, as per the exchange rate and reverted to the old currency, today 1$ = 42,500 cedis).

Recently, by your own admission, 60% of people in the NDC government are thieves milking the nation like there is no tomorrow. But, Sir, the NDC is your baby, a polished face of a rather more iniquitous bandit stratocracy that came in the form of the PNDC. Your shady ideals must have dissipated into thin air much like the El-Nino and El-Nina weather phenomena that care nothing for man and beast.

In 1982, you changed the currency in order to consolidate your control over people’s wealth. The rich fled and lost everything in the wake of your senseless brutalities. Many were killed because they possessed more than fifty thousand Cedis, in those days. Many more burned their money in order to save their lives. There was the story of an elderly woman who found a bag of foreign money abandonedat a garbage dump in Nima. This lady sent it to the Police Station, and people did not understand why she did that, maybe she was an overly patriotic citizen or just plain foolish, but she got beaten up by the police who took the sac and only GOD knows what they did with the foreign cash. I would assume they enriched themselves with it.

Since 2009 up to date, the party that you founded has been helping itself to the booty of the nation. Billions of US Dollars are unaccounted for. “Babies with sharp teeth” have taken over the affairs of this nation redirecting it onto an insecure path. It is said that OkudzetoAblakwa, a penniless graduate when President Atta Mills adopted him, now owns about orty nine fuel stations in addition to many properties. Ibrahim Mahama is said to control the country’s projects and dictates the tangent of fiscal issues to the extent that he is now a US Dollar billionaire.

Roland Agambire is purported to have duped the Nation off millions of dollars in the reforestation, guinea fowl and other projects. Betty Mould Iddrisu, with the collusion of Bart Oduro and others, is said to have assisted Woyome in the scandalous fifty one million GHs theft of tax payers’ money. All these atrocities are being meted out on the poor citizenry by your own baby, THE NDC.

If you haven’t chickened out, exert your weight and exercise your powers as a true leader whose ideals have remained intact, as you would want all to believe. Let the accused be tried and if found culpable, be made to face the firing squad, at least to bring solace to the lives that were wrongfully taken by your junta due to simple things that you found quite unacceptable.

Ibrahim Mahama, Roland Agambire, OkudzetoAblakwa, MahamaAyariga et al who are rumoured to have stolen from the Nation’s coffers must be tried and sentenced to the firing squad if found guilty.

Let us hear your ROAR, Your Excellency Former President Jerry John Rawlings... that is if you still command the NDC.