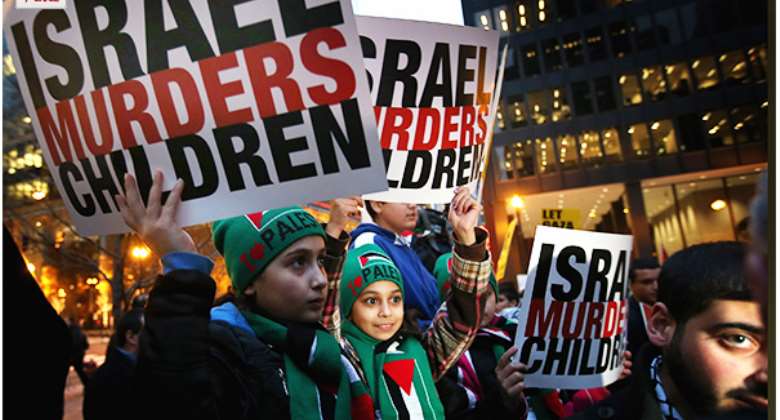 I am stunned and in absolute shock at the colossal propaganda of a dirty few with regards to the raging terror against the defenceless, unarmed and imprisoned people of Gaza,and Palestine in general.

I chanced an unfortunate piece of trash written by Jonah Goldberg, and not surprising at all coming from a nepotistic, nihilistic chauvinist as him. He is, of course, a Zionist who lives, breathes, eats and sleeps 'hate'. Much different from proper Jews who are in total denial of the savagery of the illegal state of Israel since its conception, he dwells on fallacy.After all isn't the whole dogma of Zionism a complete farce? Sure it is so! Jews in their pure state are our brothers, friends and families, make no mistake about that.

This liar claims that the genocide against Gaza is a 'lie'..Well, I want to tell you that he himself lives a big lie, much bigger than his pedigree and the entities that he slaves for, USA and Israel. He repeated the outrageous lie of his master Netanyahu who told FOX news'We're using missile defence to protect our civilians, and they're using their civilians to protect their missiles'; a preposterous lie by all definitions and measures. Israel is well protected with bunkers and other shelters unlike Gazan children who are protected by broken tables and hanging roofs that they retreat to when their parents are slaughtered, daily.

Many do find themselves hungry and destitute and many more die of dehumanising conditions alongside those who are ripped apart by shrapnel and bullets that could split open the head of an elephant. Then you say that Hamas uses civilians to protect their missiles; how crude and iniquitous your lot is! The rabbi who stated in 2012 that 'one million Palestinians are not worth the finger nail of an Israeli' was not condemned but rather hailed as a hero.

A 'female' MP (female is the most respectful word I could use in this context where I am inclined to employ a more apt description of this inhuman person), AyeletShaked, said, a couple of days ago, that 'the solution to the Palestinian crisis is to kill all their women because they give birth to little snakes'; see http://www.presstv.ir/detail/2014/07/16/371556/israel-must-kill-all-palestinian-mothers/

First of all, Israel has sealed Gaza off from the world and food barely trickles in.

People die of hunger, destitution, disease and other vices because there is an absolute want for humane services which do not exist for the simple reason that Gaza is cordoned off as a 'NO GO' zone making it the largest open air prison in the world; a massive concentration camp so to speak. Does poisonous gas that Israel is currently using on Gaza, killing scores of people and sickening hundreds, discriminate between the terrorist and the human shield, as you purport? Well, just to admonish your blind soul to read this story online because it is happening, now, as I am writing this article. Then you claim unfathomable excuses to defend your impish motives.

When Zionist power is consolidated with biased and bigoted news networks like CNN, BBC, FOX news, CBS, NBC and others, watched by a large section of the human population, then it comes as no surprise that gullible people worldwide believe the fallacies of their lopsided reporting.

When kicking a football on the beach becomes tantamount to terrorism, it is deemed reason enough for this heinous intentional slaughter of four children aged 11, 10, 10 and 9 years? The target was a pocket of Hamas operatives and the children were a mere sacrifice caught in the line of fire, it was excused by the militaryI BEG YOUR PARDON! Balderdash, vile tripe, irrational stupidity of kleptomaniacs who know nothing other than leeching on the blood of helpless and hapless people, defenseless in stature, hopeless in condition and innocent by all measures and counts.

There are no two sides to the Palestinian story; it is just an age old fable of a people stripped off their identity by a bunch of rogues, colonial Pharaohs and tauntingly mischievous braggarts aided and abetted, primarily, by Great Britain,USA and, generally, the West. Do not forget, that the Zionist Jews were such a pain in the butt of Stalin that he bought into the idea of shipping them away to a distant state that was to be established for them.

Uganda was going to be the Promised Land of Israel but the story changed overnight due to the balance of Power knowing all too well that the Arabs were a potential threat to the western Bloc. This is not a hidden fact, so how come all of a sudden Palestine was tooted to be the land of their ancestors? Was Uganda going to serve as that land that they had been looking for? Had the purported Temple of Solomon suddenly shifted by some form of miracle from Kampala to Jerusalem? Hasn't anyone thought closely about the airplane High-jacking that ended at Entebbe? The Israeli Military knew the airport inch by inch without ever treading those grounds and such was their plan: they were to invade Uganda and take over the whole country in the shortest time possible. So I ask you, what happened? How did Israel change location in a jiffy as such?

Then you claim a shameful rhetoric'SELF DEFENCE', whenever Israel finds itself in a shambolic state after a criminal offensive. Do you remember Canna in south Lebanon when hundreds of children were slaughtered and gassed in their sleep? All that happened in a matter of a few hours and by dawn the crime had been committed and the zionist forces had retreated to the stolen land. Were those children terrorists hiding under the cover of darkness? Nonsense!

The information banks are rampant with preponderantly undeniable facts to ascertain my submission:

Fortunately, technology of our latter day seems to favour, somewhat, the oppressed like the Palestinians, especially, the Gazans with inference to the status quo in that Holy Land of Muslims and Christians. It is imperative to take into consideration a few of the innumerable facts that people, generally, are oblivious to.

a. The people of Israel were referred to biblically as not the people of the state of Israel but rather the descendants of Israel, whom the Jews claim to be the son of GOD.

b. The Jews 'proper' claim that it is a blasphemy for them to have a state and as such there is no such thing as the state of Israel. This they confirm with documents and solid facts.

c. The mention of Palestine (Philistine) in the Bible is rife unlike the state of Israel.

d. The Zionists were shipped like cattle in vessels much like huge cans of sardines in a manner that suggested that they were hurriedly loaded for the relief of seeing them relocate. They were such a pain!

e. The Chief Jewish Rabbi was contacted for approval in the endeavour of establishing the criminal state of Israel in 1947 but he declined, vehemently,bless his soul, stating that it was a blasphemy to do so but lo and behold, shortly thereafter, in 1948, with total disregard to his authority, the birth of the serpent called Israel was declared. See the link in point 'b'. And the examples abound countlessly.

Not until we are able to discern the truth and learn not to trust the policies of USA, Britain and their allies, we will forever remain blind because they, actually, practise hypnosis of their viewers. That is what it comes to when propaganda is irrationally potent to the extent that its articulation captivates the mind,beholds the eyes and captures the undiscerning ears.

So please Mr Jonah or whatever you call yourself, learn to speak the truth and fear GOD that the affliction of poor Palestinian families and their children may not be your calamity soon.

Liar, and, even though, these words of mine will have no impact whatsoever on the current genocide/holocaust visited on Palestinians, at least it will go far enough to educate the discerning human being who has the compassion to see the inhuman savagery of the actions of Israel and the roguishness of her untruthful and non-objective propaganda.

I say shame on you and your likes for peddling satanic lies.Fortunately same is having a damning effect on your murderous and bloody schemes such that listeners are beginning to see the truth which you have forever sought to sweep under the carpet.

So shut up and forever hold your peace, Jonah Goldberg!!!