It Takes Two To Tango 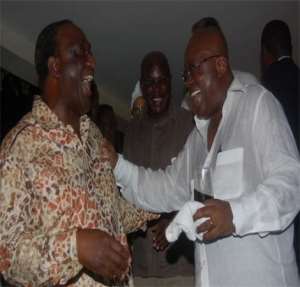 While it cannot be gainsaid that the topsy turvy state of the economy and the lingering economic hardship has caused an amperage of fury and kerfuffle amongst many a Ghanaian, it must be keenly observed that squealing captiously without providing solution will only amount to rearranging the proverbial deck chairs on the titanic.

Even though some of the policy initiatives by The Mahama- Amissah administration and the conduct of some of its appointees have left much to be desired, it would be vacuous to posit that mother Ghana was literally carted in stitches on a gurney and brought into this state by the present government. it goes without saying that successive governments have contributed to this cannon drum.

When a nation which hitherto was unrivalled in terms of economic and political advantages in tropical Africa now becomes a recipient of foreign aid, then there must be something fundamentally wrong with us. Ghana has a huge economic potential. It is replete with large quantities of gold, cocoa and significant reserves of diamond and bauxite. Arguably, Africa's top economic performer in 2011 with a growth rate of 14.4 per cent. Her Oil and gas revenues are also expected to reach a peak in 2018-2022, rising above US$3 billion per year.

Most often than not,a heavy surge of thoughtful silence and ratiocination remain uppermost on my mind as to why Ghana has ruefully bowed to the beguiling quandary of corruption unconscionably.It is a ubiquitous Achilles heel which requires a comprehensive approach to exorcise.In a country where rapacious cupidity has characterized every sector,from the parastatals to the average Joe,successive governments have gleefully sacrificed socio-economic development on the altar of a brutish frittering away of the nation's meager resources on uncongenial activities and vote buying finicky

It is often said that the role of an opposition party in a democracy is very vital in the governance framework. A strong democracy thrives when there is an array of options all the way to the selection of government. Suffice it to say that it is incumbent on an opposition party to play the role of an alternative government and indeed, a government in waiting. Even though there are actions of the ruling party which may be beneficial to the populace, an opposition party has a duty to check the excesses of the ruling party. It is against this backdrop that i am distinctively underwhelmed by the way the opposition New Patriotic Party have conducted them in the face of this cloying economic nadir. Inordinately bedeviled with post electoral altercation and a portentous grapple of leadership, the largest opposition party in Ghana may be blotting their copy book and eventually fall short of appealing to the believability quotient of the Ghanaian electorate.

The puff of smoke that has been literally billowing from the roof of the NPP headquarters in the wake of the 2012 election petition verdict has greased the skids to cramp their style. Dr Wereko Brobbey,a founding father of the party, threw down the gauntlet when he openly hauled the NPP leadership over the coals for what he thought amounted to downright tomfoolery and passing the buck for the upper echelons and yes-men of the "kukrudu" fraternity to valiantly attempt a post election 2012 legal brawl.

Some party faithfuls also argued that, instead of making fictitious allegations in an ups-hit creek, the party should do a solemn introspection as to why it is gleefully stereotyped as an imperiously Akan domineering political party or if u like, Ashanti intransigence.Others argued that licking their wounds would be most up to snuff so they should release their pent up frustrations into building party structures and desist from chasing illusions. As if that was not enough, the party has come under a slew of unpleasant stories and saccharine oeuvre in the last few months.

The struggle between supporters of Alan Kyeremanten and Akufo-Addo may have hit a crescendo when there was an insipid strife between security personnel of the party sometime in June 2014. The election of Paul Afoko and Kwabena Agyepong as party chairman and general secretary respectively has been viewed as a Trojan horse by some Akufu Addo apologists. Their leadership has been characterized by insipid vicissitudes of suspicion and jarring tumult.

A very united New patriotic party ticked all the right boxes during the Rawlings era. A period when Ghana was faced with major problems such as the economic recovery program, the progressive fall in the value of the cedi, high inflation rate(more than 30 percent in the mid- 1995), lack of private sector investments, rising levels of unemployment etc. Akufo-Addo who had lost the NPP flagbeareship race during the Sunyani congress in 1998 backed the electoral candidature of his main contender, John Kufour to give the NPP electoral victory .My unflappable contention now is the complete insouciance of Mr Agyekum Kufuor.I thought that the burly and elderly albeit redoubtable statesman would use his stature to read the riot act in the ensuing melee.

Ghana's inflation rate hit 18.1% in December 2008 during the Kufour administration. A time when the NPP was literally going to hell in a handbag .It took a temeritous National Democratic Congress whose campaign promises, to all intents and purposes, resonated among the Ghanaian electorate to give them a cherry pick.On the preceding score,mention should be made of the forum for setting the records straight designed by the the National Democratic Congress.The sporadic forum sought to present the voting public with solutions to our various challenges.What have our opposition parties, particularly the New Patriotic Party been doing since their defeat in 2008?

Akufu Ado came under standoffish censure and obloquy for his 'yen Akan fo' clarion call,a perfunctory epithet which many thought smacked of ethnocentric bathos. What about Honorable Kennedy Agyepong's genocidal twaddle and hydra? When he gratuitously called on a particular tribe to rise against the other.Conversely,the late Professor Mills was accused of inciting denizens of the coastal belt of Ghana against the then President Kufour when the former was seeking to occupy the highest office of the land in 2008.By now it ought to be crystal clear to the upper echelons of the New patriotic party that it sanely behooves them to provide the Ghanaian people with quality opposition in this horrid times.

As incontinently jaded as some of us avid political observers had become, we had our hearts in the right place when Dr Bawumia mounted the central university podium to do a prognosis on Ghana's ailing economy. His lecture, titled 'Restoring the value of the cedi', widened the discursive thrust on how to fix the economy albeit it stirred up a honet's nest.It is not so much the issue of being in opposition that matters, but an opposition party whose interest amongst many others is to fastidiously provide the electorate with a line of least resistance.

In sum, despite its convoluted and banal "winner takes all" system of governance, Ghana's political landscape can crank up if there is an opposition party with a voracious and untrammeled appetite for development.