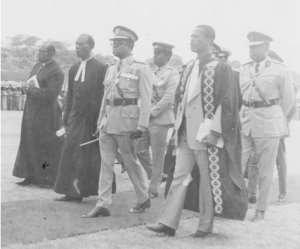 LAST Thursday, 26th June, 2014 witnessed the celebration of the life and legacy of one of the Legends of Mfantsipim, Mr. Henry Vincent Allotey Acquaye-Baddoo, the 33rd Headmaster of 'The School', Ghana's oldest secondary school.

The late Acquaye-Baddoo was born on Wednesday, 29th March, 1933, at Agona Swedru, to Reverend Henry Vincent and Mrs. Hannah Acquaye-Baddoo. He was the first of 6 children. As children, they lived in different locations as their father was transferred starting at Discove from where they moved to Swedru, Akim Oda, Bisease, Enchi, Dodowa, Apam Obuasi and Accra. After some time in Accra, the family moved again to Aburi and on to Nkawkaw and Dodowa for the second time. After Dodowa their father retired and settled at home in Accra with his wife.

Acquaye-Baddoo spent his primary and middle years of education at Osei Tutu boarding school in Kumasi. This must have provided continuity as the family moved quite a lot. He entered Mfantsipim in 1948 and completed in 1951. From here he attended Wesley College, Kumasi where he gained his Post-Secondary Teacher's Certificate 'A' in 1953. He spent the next 5 years teaching at Middle schools in Konongo, Fomena, Obuasi, Suhum and Accra. From 1962-1965, he studied at the University of Cape Coast, where he gained a B. A. Ed. Degree, reading English, Sociology and Education.

After a year of teaching at St. Augustine's College, in Cape Coast, he joined the staff of Mfantsipim School as an English Tutor in September 1966. Mr. J. W. Abruquah, the 31st Headmaster of the School noted that 'Mr. Acquaye-Baddoo holds great promise and needs every encouragement to keep him in his chosen profession. Already, he shows ability, mature judgement and enthusiasm in whatever he undertakes'.

He worked his way up in Mfantsipim to Senior Graduate Master, Head of English Department, Housemaster of Lockhart House, Senior Housemaster, Assistant Headmaster and Headmaster of the School. Mr. Kwame Gyasi a.k.a. Lemmy Caution (MOBA 1965) states: 'The late H. V. A. Acquaye-Baddoo joined the staff of Kwabotwe as English Master during the 1966-1967 academic year when members of MOBA 1965 were in Sixth Form. I was the Entertainment Prefect at that time and Mr. Acquaye-Baddoo was appointed the Master in charge of Entertainment. I therefore had very close working relationship with him, even though some of my colleagues might retain only a fleeting memory of him. I can recall how every morning he would walk from his bungalow No. 1, located south (main) entrance to the School (roundabout) to the School up the hill in his traditional white shirt and white shorts with the look of a headmaster around him and his own English way of speaking the Queen's English. It was during that tenure as persons in charge of entertainment that great films like Summer Holiday, Payroll, and Beauty Jungle were screened.'

Dr. Mohammed Ibn Chambas (MOBA 1968), the Joint Special Representative for Darfur and Head of the African Union United Nations Hybrid Operation in Darfur (UNAMID) had this to say on being told of his death: 'I am touched by the sad news of the demise of Mr. H. V. A. Acquaye-Baddoo. He was an illustrious Headmaster, a committed educationist, a true role model and a wonderful gentleman who set the bar very high at Mfantsipim for all, teachers, pupils and old boys. What a great loss to our country and the Mfantsipim community. Our thought goes out to his family and loved ones for this irreparable loss.'

Acquaye-Baddoo became the Acting Headmaster when the then Headmaster, Mr. O. K. Monney was relieved of his post by then Minister of Education in March, 1976. In doing so 'he achieved the dream of every Old Boy who ever taught at the school and remained a teacher.' He thus had the unique opportunity to pass on the great traditions of the school to the students from the position of Headmaster.

The year he took office, 1976 coincided with the Centenary celebrations of the School and he supervised the event creditably.

It is on record that the first two years of his tenure of office from 1976 to 1978, the School witnessed marked improvement in academic performances, while members of staff showed increased enthusiasm and cooperation in their work. Acquaye-Baddoo, as usual, believed that Mfantsipim was the best school and had to occupy the first position in all aspects of academic and social endeavours.

Socially, he got on very well with teachers who performed very well. He did not mince his words and said exactly the right things about his teachers. His end of year get-togethers were full of cordial interactions, merry making and he personally got involved in all aspects.

However, his strict adherence to the old disciplinary principle of 'obey before you complain' and 'a breach of common sense is a breach of school rules' caused his sudden departure from School.

He endured two demonstrations in 1979 and 1980 for these 'Spartan' rules. Both demonstrations were unexpected and peaceful. Students complained of harsh discipline for the 1979 demonstration. They turned round to blame the Headmaster and his administration for not enforcing discipline, as reason for the second demonstration in 1980. These notwithstanding, the School in its tribute stated: 'Mfantsipim remembers 'Acquaye' for his strong rules in promoting discipline'.

His brother, Adoquaye says this of him: 'He was both a dynamic personality and highly principled. He governed his life by the fundamental principle that all men are created equal in the eyes of God, and therefore we each of us must have access to equality and justice. That was the cornerstone of his life. He relentlessly applied the principle both in his personal affairs and professional matters.'

To his children - Naa-aku, Adukwei, Sonny, Kaaley and Mootsoo, 'Our father was a big presence in our lives and the big thing in his life, Mfantsipim, in turn shaped our childhood, teens and early adulthood.

Mfantsipim was central (to everything in his life) and that was clear. He worked hard, leaving home very early each morning to march up the hill. Everything had to be on time and for about an hour and a half each afternoon, the house was hushed as he took his daily siesta. He was on a mission to raise standards and keep them. He once drove to Takoradi and back, twice to fill his car with toilet rolls for form one students who were due the following day because the consignment that had been arranged had not arrived on time. The centenary celebrations were of course the highlight of his Mfantsipim years and he oversaw a meticulously planned and executed project. Nothing was left to chance'.

Kyeretwie Opoku, an Old Boy of Mfantsipim had this to say also: 'Acquaye-Baddoo had the reputation amongst the senior boys of being an enthusiastic and gifted teacher. Like many of the outstanding teachers of his generation, it was evident that he saw the shaping of the future of the many young people under his care as a sacred trust; we were his project.'

However, like many Mfantsipim students of my generation, what I remember most about Acquaye-Baddoo was his relentless discipline. His iron-minded insistence on school rules and intolerance of 'excuses' were legendary. Indeed, he was a soldier with a mission to prepare his 'troops' to live up to a set of ideals in a difficult and changing world.'

Mr. Opoku recalls with nostalgia a discussion and 'Acquaye' intimating at the end that: 'I think I taught you better than that. Always stand up for what you believe and never be ashamed of having done the right thing'. That was vintage Acquaye-Baddoo.

Acquaye-Baddoo (1933-2014) took teaching as a calling, a ministry and as the lay preacher he was, saw his students as the sheep assigned him to be their shepherd.

Yes, I was personally scared of him as my Literature master, especially during classes but then I have grown to appreciate what he tried to inculcate in me. I believe he gave me the self-belief to become the editor of my class weekly called 'The Lightning'; and much later to run a number of award-wining newspapers like the 'SPORTS COIN', 'LEISURE Arts & Music' and the 'PUBLIC OPINION'; as well as develop a writing style of my own to even attempt this piece.

I believe my greatest tribute was to engineer his last curtain call from the stage of his life through the role of Mfantsipim School and the numerous Old Boys who went to ensure he had a more than befitting send-off at the Wesley Methodist Cathedral, Asafoatse Nettey Road, Accra on Thursday, 26th June, 2014: one reserved for only Legends.

His transiting coincided with the draping of the new Mfantsipim Flag on his casket throughout the service with the Cadet Corps on guard of honour; and finally when he was departing the Cadet Corps folded the Flag and handed it over to his family as a memoriam of his services to Mfantsipim.

'In true Mfantsipim spirit, Mr. H. V. A. Acquaye-Baddoo was a faithful soldier, true and bold and nobly fought as his predecessors of old. His crowning glory was the Headmastership of our great alma mater'. 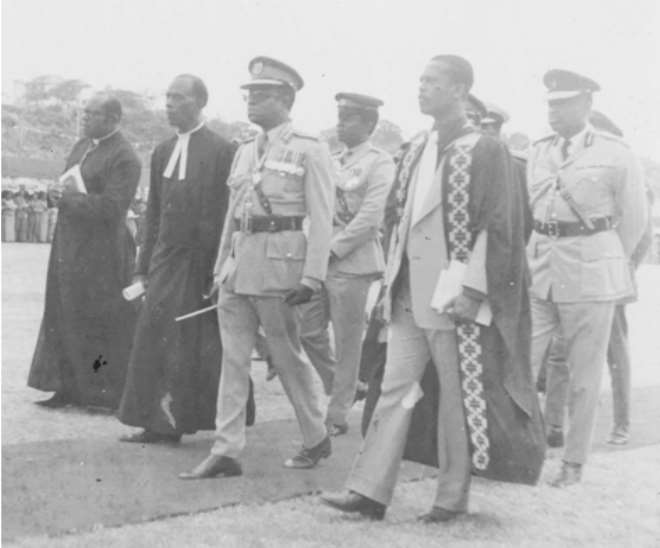 Acquaye-Baddoo With Late Gen. Kutu Acheampong During The Centenary Celebrations In 1976 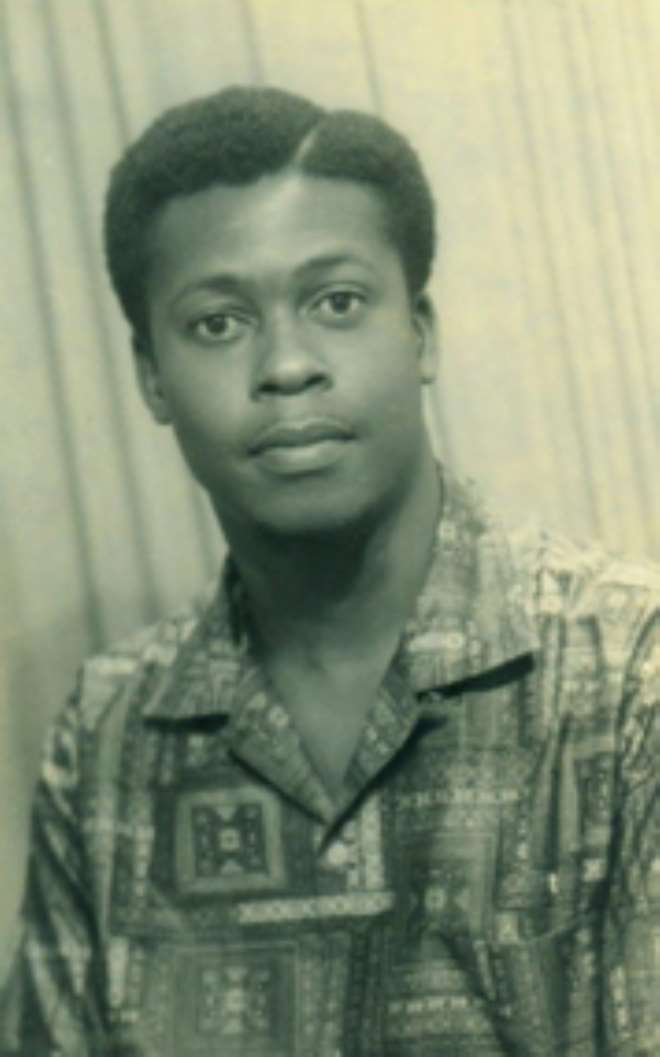 Acquaye-Baddoo In His Early Adulthood