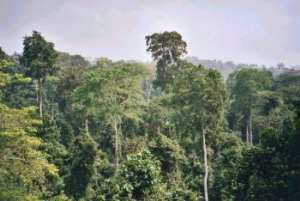 Accra, May 18, GNA - Thirty forest reserves have been declared "No Go Areas" to maintain their virginity and to promote their environmental management on a sustainable biodiversity conservation. Professor Dominic Fobih, Minister of Lands and Forestry, said the Government had, therefore, with the assistance of the Global Environmental Facility, designed a six-year High Forest Biodiversity Conservation project.
An amount of 2.5 million dollars would be disbursed under the Community Investment Fund.
Under the fund, community based enterprises would be developed with the focus on ecologically sustainable natural resource use and management of the forests.
It would involve ventures such as snail farming, bee-keeping, mushroom farming and agro-forestry for those in the communities to generate economic alternatives for their livelihood.
Five pilot areas; the Tano Ofin (Ashanti), the Southern Dry Forest Group (Central), the Atiwa Range (Eastern), Cape Three Point and Krokosua Hills in the Western Region have been selected and people in those communities are to benefit from the fund.
Professor Fobih announcing these measures on Tuesday during the inauguration of a seven member National Fund Management Committee of the Community Investment Fund, named eco-tourism as an alternative to logging.
The objectives of the project are to strengthen the biodiversity conservation and human resource management capacity of the Forestry Commission and to protect priority conservation areas within existing production forest reserves.
Prof Fobih said the project also sought to establish selected reserves or portions of reserves as Globally Significant Biodiversity Areas (GSBA) and Protected Provenance Areas (PPA) that would be taken out of production and initiate pilot activities to generate revenues from other activities.
He said arrangements were far advanced to appoint ARB APEX Bank as a fund Manager and some rural banks in some of the five pilot areas have been identified for disbursement of the fund at the community level. He urged the committee members to work hard to ensure that funds were made available to the beneficiary communities to alleviate their poverty and suffering.
Briefing the members on the Community Investment Fund, Mr Oppong Sasu, Leader of the High Forest Resource Management, said the continued destruction of biodiversity in the rural areas through reckless activities would undermined the objective for the establishment of the fund.
He said a comprehensive training programme had been planned for the beneficiary communities in order to build their capacities to function effectively.
Mr Sasu urged the leaders of the various communities to resist any action that threatened the sustainability of the Project.
He said: "We look forward to the day communities would assume true ownership of their resources and lead conservation initiatives." Ms Theresa Tagoe, Deputy Minister of Lands and Forestry, urged the Members of the Committee to ensure that they performed their responsibilities well.
Mr Emmanuel Akkufo (rpt Akkufo), Chief Director of the Ministry and the Chairman of the Committee gave the assurance that they would work hard to see to the success of the Project.
He said: "We are aware of the importance of the fund to the beneficiary communities."
Other members of the committee are representatives of the Forest Services Division, Wildlife Division, Traditional Authorities and Landowners, Community Biodiversity Advisory Group and a member of Conservation International a nongovernmental organisation. 18 May 04