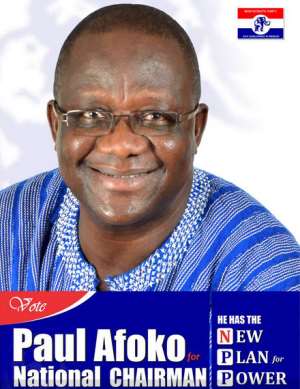 Now that Paul Afoko is smugly ensconced in his new role as Chairman of the NPP, it is becoming increasingly evident that his tenure will be marked by missed opportunities and disappointments. His election as the party's head-honcho wasn't without drama as his opponents tried vainly to tar him with the negativity often reserved for the most despicable in society.

Afoko's ascendancy to the upper echelons of the party was a momentous occasion, indeed a reason to celebrate because the chance that a political party long thought off as primitively tribal bestowing such high honor on someone from the “hinterland” until that point was a remote possibility.

Afoko exudes supreme confidence and at this point in its political life, the NPP needs a man of his caliber, vision and enthusiasm, indeed a capable leader who can steer the party once again to political nirvana. Two consecutive electoral defeats made worse still by the Supreme Court's slap-down of a poorly-advised lawsuit to nullify President Mahama's election can be traumatic to the psyche of a party can indeed cause the party to lose its mojo. And for a while the NPP lost its way.

I have little reason to doubt Afoko's ability to efficiently carry out his mandated duties as chairman; he is an achiever; his remarkable success in the private sector is ample evidence. Not unexpected, his victory speech at the Tamale stadium was laced with promises to revive the political fortunes of the party and restore its luster.

Though 2016 is still eons away in political terms, Chairman Afoko's task has been smoothened by a confluence of factors - queasiness among Ghanaians about the economy and a steep dissatisfaction with the direction of the country. But electoral victory and subsequent political redemption will remain elusive if Afoko and his party continue to shun opportunities to articulate the party's ideas and perspectives on bettering the economy before a national audience.

The recently concluded National Economic Forumin Senchi organized by the party's political nemesis, the NDC was such an opportunity. However,the NPP's stubborn refusal to participate in what was broadly viewed as a concerted national effort to collate ideas on how best to revamp the ailing economy, was not only politically dumb, it was also a gross misreading of the national mood and in keeping with the party's brass-band blare of dissent.

Ghanaians are hurting, suffocating under enormous financial burdens and therefore expect their politicians to work together to find solutions to the many economic difficulties they face. In its hour of need, the nation needs all political hands on deck.

Though some have excoriated the entire NPP for its puerile display, I put the blame squarely on the shoulders of Afoko. As chairman of a political party out in the cold for the last six years and eager to regain the public's trust, Afoko should have put his foot down and led the troops to Senchi to engage other forum participants in a healthy debate and exchange of ideas.

Instead, he engaged in standard political gamesmanship with this curt retort, “The conference is a public relations gimmick,” and advancing such ludicrous reasons as the invitations to the conference arrived late and his members were ill-prepared.

Somebody should have whispered in the chairman's ear that his presence at Senchi was very crucial and could have done a number of things for him personally and for his party as a whole. For one thing, the notion, however erroneous, that he is a token and a puppet being scurrilously used by his southern supporters to further their political agenda would have been shot down, and for another, it would have solidified his credentials as leader who can keep the party in line. As for the party itself, I don't know if its presence likely would have changed its political fortunes come 2016, but at least, it surely would have demonstrated its total commitment to the welfare of Ghanaians.

Failure to attend the Economic Conference was a missed opportunity for the likes of Dr Bawumia, the party's resident intellectual and many others to showcase their capabilities; while bantering with his political opponents, Bawumia perhaps would have felt comfortable needling, cajoling and urging them to take a long, hard look at his economic and financial proposals and find the gems in them.

This is Afoko's first major political blunder and I hope there are not many more to come as he grows in the job and finds his niche. With time, Afoko has to show that he is completely in charge and there should be occasions when he must stamp his authority on the NPP organization without any hang-ups or reservations. This is the only way the party can crawl back from the political wilderness.