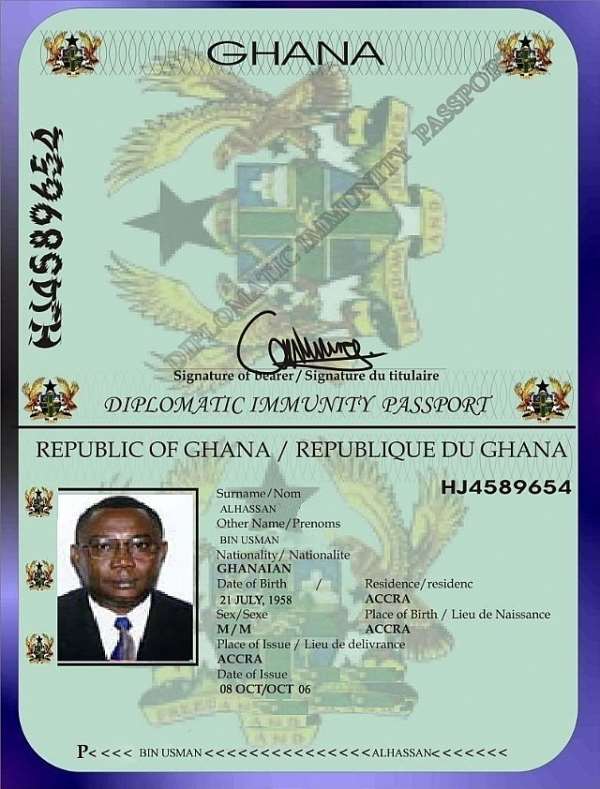 I first met Usman Alhassan in April. My brother in law found his way to the Diplomat in an effort to seek his assistance. He was asking for help is getting a gold inheritance sent to me here in the United States. He and his sister had been struggling for months to find a buyer to allow her the funds to come live with me here in the U.S. Usman Alhassan was very encouraging. So much so that my brother in law handed him the phone to speak with me on his first visit with the diplomat.

We spoke for a while and discussed the dilemma at length. He expressed that he had been told of their struggle and wanted to help. He went so far as to quote me a price to deliver the consignment personally as a diplomatic courier for the sum of 7,500$. He was made aware of my situation and all the support money I had sent already, including the funds needed to bury my wife's granny, Elizabeth there in Kumasi.

I explained to him that I was cash poor and that I didn't have that much money to send. We hung up with me agreeing to see what I could put together possible via a loan through my employer. I was able to secure a loan but it would take a couple of days to secure, and offered him 500$ the next day, and the balance when the loan came through. He said something to be that at the time I thought curious, but it was a very early indicator of his intentions. His response to me was to say 'are you trying to bribe me?'. It was not anything beyond a down payment, so the mention of a bribe surprised me. I explained what I wanted to do and he seemed ok with it, promising me he could deliver within a week or so of receiving the balance. I was quite relieved. Little did I know of him.

In two days I sent him the balance and he was off making preparations. Less than a week later we spoke and he completely dumbfounded me by saying all he needed next was 25,000$ for an anti-terrorism document. When I expressed my irritation at such a request, he acted quite nonchalant, as if our conversation less than a week earlier hadn't occurred. I told him there was no way I could produce such funds, he expressed there was nothing he could without it, and there was no way to return my 7,500$, as he had spent it on 'documents'. He also wanted money to bribe his boss, Minister Mustapha. He called it 'thank you' money.

Flash forward several months and he delivers the consignment to a security company in New York, that required over 60,000 from me to have it delivered to me here in Oklahoma. In true Usman Alhassan fashion, once that money was gathered and sent to the delivery company the delivery guy tells me that there is an additional 150,000 due before he can deliver. I was devastated. He had cleaned me out entirely on promises once again. This became his pattern over the following months, to the point that I completely emptied every resource I could muster to accomodate him including sending my retirement funds that required my early retirement from a great job that I had for over 30 years.

I share my horrible experience with this diplomat because I want to warn others there in Ghana about his lack of sincerity, honesty, and trustworthiness. Diplomat Usman Alhassan pretended to be the expert on consignment transportation and he was little more than a delivery boy it turned out. It was as if he had never done this before, despite his repeated bragging to the contrary - delivering gold consignments throughout the world for his clients. Smuggling gold sounds more likely it to me. In on of our many conversations he asked me to have a woman ready for him when he arrived here. I was again dumfounded, prostitution is ilegal here. Apparently he frequents them often.

Flash forward even further, and I have the misfortune of having my father pass away suddenly. Just a few weeks ago, I foolishly sent what was promised as the absolute last 5,000 to comply with a local investor agreement to finally complete the delivery. As the reader of this, you must be telling yourself what a fool I must be for hanging in there all this time. I agree completely with you if so. I desperately wanted my wife to join me here. Go figure.

I have completely ruined my credit-worthiness here in the U.S. at this point. I have no job now, no savings, and am soon to lose my home and everything else to creditors due to his incompetence and dishonesty. My wife will never come here now because of him, and my own family will have nothing to do with me, given that last 5,000 was from my dead father's account, I was charged with taking care of. His reaction to this is basically that he's sorry and that he did all he could for me.

So, your take-away from this read is to be on guard should you ever find yourself in need of a delivery diplomat, and one contacts you or is recommended to you by the name of Usman Alhassan. You should run, not walk away from him. Don't give him a dime. He is a professional con artist and scammer operating under the guise of a Ghana government official. He and his boss, Minister Mustapha, have a real racket going there.