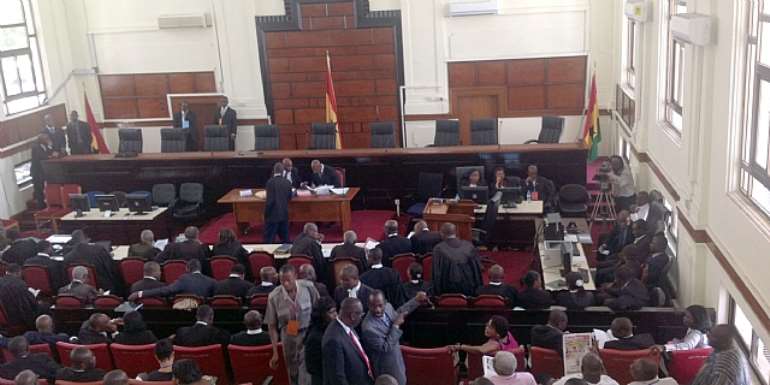 June 26, 2013 will go down in history as one of the darkest days of Ghana's constitutional experiment. On that day, Sammy Awuku was summoned before the Supreme Court of Ghana to answer for his out-of-court comments made about the almost 7-months old Presidential Petition. The accused contemnor had reportedly criticized the Justices for being selective in their warnings to the media, after the Justices had apparently cited a Daily Guide report as an example of poor reporting by the media. In a rare show of unity, both the petitioners' and respondents' lawyers pleaded with the court to temper justice with mercy. After a hearing, the Justices retired to their chambers and returned with a verdict: Sammy Awuku is banned from making further appearances in the Court, after the Court had 'mercifully' decided not to invoke its power of contempt. Only his 'candid admission and apology' saved him from a more severe punishment.

As I watched the proceedings on TV, in utter disbelief, I could only wonder why the Court would divert time from its important overdue task to such a trivial pursuit. What exactly did Sammy Awuku do to warrant this invitation to the Supreme Court followed by a public rebuke by the Justices? As far as I can tell, his only 'sin' was to hold and express an opinion on the ongoing petition at the Supreme Court, not unlike the President declaring that 'justice will be served by the Supreme Court by acknowledging the free and fair nature of the 2012 presidential election.'

That very same Constitution from which the Supreme Court Justices derive their power to hold contemnors for contempt is emphatic that 'all persons shall have the right to freedom of speech and expression, which shall include freedom of the press and media.' Further, a whole chapter of the Constitution is devoted to guaranteeing the freedom and independence of the media. And understandably so, given our history of fighting against the culture of silence, which characterized the military era, and our collective desire and hope to never allow the reemergence of any regime wherein expressing an opinion, no matter how erroneous or even inflammatory, will be criminalized.

Of course, freedom of expression is not absolute. Nor is it the only important constitutional value. An equally important constitutional value is the administration of justice. No society can function effectively, unless it devices mechanisms that prevents those who seek to interfere with the administration of justice. The Court's contempt powers derive from this necessity.

Needless to say, the right to express includes the right to express on matters before the Courts. For as Justice Brennan puts it, 'it is a prized privilege to speak one's mind, although not always with perfect good taste, on all public institutions and this opportunity should be afforded for vigorous advocacy no less than abstract discussion.' This creates an instant constitutional dilemma: at what point can expressing oneself on matters before a Court be said to have interfered with the administration of justice?

For instance, on February 14, 1968, an article appeared in a British newspaper to the effect that 'the recent judgment of the Court of Appeal is a strange example of the blindness which sometimes descends on the best of judges.' Contempt proceedings were brought against the author in Regina v. Commissioner of Police of the Metropolis (1968) 2 All ER 319. Writing for the Court, to dismiss the contempt charge, Lord Denning observed:

''Let me say at once that we will never use this jurisdiction as a means to uphold our own dignity. That must rest on surer foundations. Nor will we use it to suppress those who speak against us. We do not fear criticism, nor do we resent it. For there is something far more important at stake. It is no less than freedom of speech itself. It is the right of every man, in Parliament or out of it, in the press or over the broadcast, to make fair comment, even outspoken comment, on matters of public interest. Those who comment can deal faithfully with all that is done in a court of justice. They can say that we are mistaken, and our decisions erroneous, whether they are subject to appeal or not. All we would ask is that those who criticise us will remember that, from the nature of our office, we cannot reply to their criticisms. We cannot enter into public controversy. Still less into political controversy. We must rely on our conduct itself to be its own vindication. Exposed as we are to the winds of criticism, nothing which is said by this person or that, nothing which is written by this pen or that, will deter us from doing what we believe is right; nor, I would add, from saying what the occasion requires, provided that it is pertinent to the matter in hand. Silence is not an option when things are ill done.'' On that same case, Judge Salmon said 'the authority and reputation of our courts are not so frail that their judgments need to be shielded from criticism.'

It was for similar reasons that a court in Trinidad, held that 'No wrong is committed by any member of the public who exercises the ordinary right of criticizing in good faith in private or public the public act done in the seat of justice. The path of criticism is a public way: the wrongheaded are permitted to err therein: provided that members of the public abstain from imputing improper motives to those taking part in the administration of justice, and are genuinely exercising a right of criticism and not acting in malice or attempting to impair the administration of justice, they are immune. Justice is not a cloistered virtue: she must be allowed to suffer the scrutiny and respectful even though outspoken comments of ordinary men.'

In India, Justice G.S. Singhvi, dismissing a contempt charge, recently drew the line as follows: 'In all civilized societies, the Courts have exhibited high degree of tolerance and accepted adverse comments and criticism of their orders/judgments even though, at times, such criticism is totally off the mark and the language used is inappropriate (Indirect Tax Practitioners Association v. R.K. Jain, 2010).'

Even the harsh, presumably dated, Ghana's pre-constitutional criminal contempt law requires an intention to bring into hatred or contempt or to excite disaffection against the administration of justice. Merely stating an opinion, that the Court is being selective, where the Court has used one publication as an example of unfair reporting, hardly meets the 'mens rea' required for the committing of this crime.

It is apparent that the Court's show of force and power was completely unnecessary and cast our Justices and jurisprudence in a rather dark light. What will the rest of the world think about our Justices who have failed to resolve a Presidential petition in close to 7 months but somehow find time to listen to the chatter of Sammy Awuku and devote precious Court time to rebuke and intimidate him? Was this action meant to silence the rest of us?

There are two ways forward for the Supreme Court. The Court could forget its core task in the Presidential Petition and shift its emphasis to monitoring all newspapers and broadcasts to identify those stating opinions about the case. Then every Friday, contemnors should be matched to the Supreme Court, publicly ridiculed, rebuked and remanded in custody. It is only such a full-scale-catch-contemnors operation that can shield the Court from accusation of selective intimidation.

Alternatively, the Court can ignore all the noise outside the courtroom and focus on its core task: whether the irregularities, malpractices, omissions and statutory violations in the 2012 elections materially affected the outcome of the elections.

In the end, the Justices will be respected not because they have the power to throw us in jail but because of the power of their reasoning and timely resolution of disputes before them.