Press Release- There is only one Brotherhood 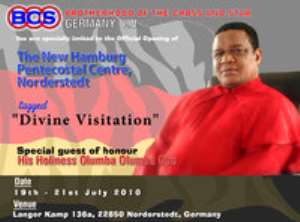 Press Release
There is only one Brotherhood
Our attention has been drawn to a subjective and uninvestigated publication on page 6 of the Punch newspaper of Saturday, 8th October, 2011, captioned “Thugs invade BCS Bethels”; authored by one Etim Ekpima.

The publication is not just a handiwork of mischief makers and enemies of 'truth', but a sponsored effort, borne out of malice waxed in destructive swaggeo. We are shocked that Punch newspapers allowed itself to be ridiculed with such a junk report that is lacking in substance.

Brotherhood of the Cross and Star is one in the entire universe and the use of 'faction', as observed in the publication is an obvious show of ignorance. The Organisation has one Universal Leader, Master, Teacher, Sustainer and Signatory, Leader Olumba Olumba Obu. His First Begotten Son, His Holiness Olumba Olumba Obu is the Chairman, Head of administration and Sole signatory of the Kingdom.

Following the Divine Coronation and installation of His First Begotten Son, His Holiness Olumba Olumba Obu as Chairman, BCS Executive Council and Head of Administration, by the Father, Olumba Olumba Obu, a few dubious individuals decided to rebel against the decision of the owner of the Kingdom. They looted the treasury of the Kingdom and seized some of her Property.

The matter eventually was taken to the Federal High Court for judicial interpretation, where they lost out. They also appealed against the ruling of the lower Court and still lost at the appellate Court.

Following the recent Appeal Court ruling, Brotherhood of the Cross and Star is presently recovering its Bethels and other Property that were left desolate for some time, and used for purposes outside the reason(s) for which they were built.

It would be recalled that the Federal Court of Appeal sitting in Calabar, recently dismissed an appeal filed by the dissident group in the Kingdom over leadership and control of the Universal Kingdom.

In its lead Judgement, Justice Kumai Bayang Akaahs, upheld an earlier ruling of the Federal High Court, ordering the dissident group to surrender all Brotherhood Property in their possession to the Board of Trustees of Brotherhood.

The Appellate Court further ordered the 'Rebels' to render account of all monies and Property of the Kingdom to the Leader, Olumba Olumba Obu, in conformity with the ruling of the lower Court.

“I find that these are the two main issues in this appeal which I resolve against the Appellant, in favour of the Respondent. I find that there was no clarity of thought either in the complaints laid in the notice of Appeal or the issues formulated in the Appellant's brief and this made it extremely difficult to consider all the issues raised in the Appeal. I would have struck out the grounds of appeal as incompetent as argued by the Respondent in the preliminary Objection, but there is a compelling reason to do substantial justice, hence, I had to overlook the technical issues raised and try to find out the substance of the appeal.

I therefore find that the appeal is totally devoid of any merit and is accordingly, dismissed”.

Adding his voice, another member of the 3-man Appeal Court Panel, Justice Massoud Abdulrahman Oredola Says: “I have had the privilege of reading in draft, the lead Judgement of my learned brother, Kumai Bayang Akaahs, JCA, just delivered. I am in full agreement with the reasoning and conclusion to the effect that the appeal is devoid of both merit and substance. I adopt the said elucidating lead judgement of my learned brother, Akaahs, JCA and I also dismiss the appeal”.

It would be recalled that following a Federal High Court Ruling of 24th March, 2010, in Suit number : FHC/CA/CS/69/2008, between the Registered Trustees of Brotherhood of the Cross and Star and Helen Johnson Udoh [A.K.A. Queen Ibum Olumba Obu]; directing the latter['Rebels'] to render accounts to the Chairman, BCS Executive Council, His Holiness Olumba Olumba Obu and to surrender all Brotherhood Property to Him, the dissidents approached the Federal Court of appeal to challenge the ruling.

In its appeal in suit number CA/C/124/2010, the Appellants alleged that the trial judge in the lower Court erred in law in its ruling, even as they claimed that facts were misdirected.

In further response to the issues raised, the Court says: “The learned trial Judge in my view reached the correct conclusion which can not be faulted. Learned Counsel for the Appellant argued without producing the Constitution that required the Leader of the Organisation to appoint the Trustees; so, his argument about the reconstitution of the Board of Trustees is without any foundation. Since the Appellant tried to re-constitute the Board of Trustees, but was beaten to it by the Respondent, she can not be heard to say that the re-constitution was not proper. The answer to the issue is that there are no two Certificates of Incorporation . It is only the Board of Trustees that was re-constituted in the Certificate issued on 6th August 2003 and the one issued on 25th March, 1964 is no longer valid”.

Continuing, the learned Judges said: “The second issue is in respect of the interpretation of the Power of Attorney which was donated to the Appellant. It is not the lower Court that failed to distinguish between the personal Properties of the donor and the Properties of the Brotherhood of the Cross and Star, but the power of Attorney itself which the appellant relied upon”.

The Board of Trustees of the Kingdom had long dismembered all those involved in the rebellion, except they repent, confess their sins and come back to the world Headquarters of the Kingdom at 34 Ambo Street Calabar, Cross River State for re integration.

Meanwhile, any body who does any transaction with any of the expelled ex members does so at his/her risk.

Ya-Na commiserates with Mahama
35 minutes ago