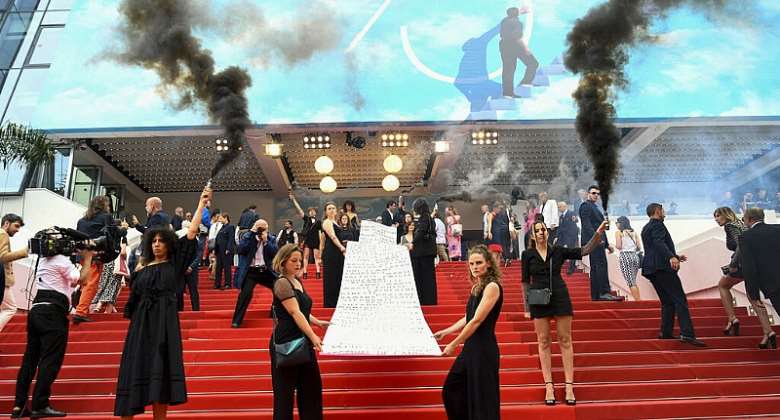 Campaigners looking to shine a light on gender-based violence took over the Cannes red carpet and unrolled a banner with the names of all the victims of femicide since the last edition of the film festival.

Members of the 'Les Colleuses' feminist collective took advantage of the attention trained on the red carpet at Cannes during the premiere of the film Holy Spider on Sunday to unroll a large poster with the names of 129 women, victims of femicide, who were killed since the last festival in July 2021.

Holy Spider, an Iranian film, is based on the story a serial killer who murdered at least 16 women.

The French government does not keep specific statistics about femicides, but about domestic violence in general. The collective 'Femicide by companion or ex' documented 44 femicides by Sunday, and 133 in 2021, or one every three days.

The activists, dressed in black, let off black smoke bombs as they held the poster and posed with their fists in the air. They had been invited to attend a screening of a documentary about them later on Sunday.

"We are wearing black because we are in mourning,” one of the members told the AFP news agency said at the screening. “We did not come to Cannes to pose, we did not want to walk up the steps smiling, but as activists, not as actors.”

On Friday, a protester took to the red carpet to protest against sexual violence in Ukraine.

Across her chest, painted yellow and blue - the colours of the Ukrainian flag - was a message 'Stop raping us', and the lower half of her body was covered in red paint.

On her back was written 'scum', the name of a French collective of radical feminists, which confirmed in an Instagram post that they were at the origin of the protest.

"Since Putin's invasion of Ukraine on February 24, Russian and European men have taken advantage of the war to sexually abuse Ukrainian women," it wrote.

Security the activists and tried to block cameras from filming, marked contrast with the the activists on Sunday who were allowed to stay on the red carpet and pose for photographs.