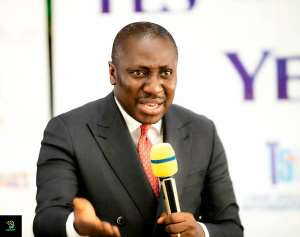 As the day draws closer, pending the historic commemoration of the Aboakyir Festival, the good people of Effutu are waiting with bated breath to showcase to the world how deep rooted they are when it comes to cultural exhibition.

One particular reason why this year's celebration is going to be unique is the fact that, the Osimpam Heritage Center which was recently constructed by Hon. Member of Parliment for Effutu Constituency, Hon. Alexander Kwamena Afenyo Markin is seriously going to be the center of attraction.

The said multifaceted edifice serves as an archival center for the rich history of the good people of Effutu. It houses the various images of Past Emperors, chiefs and the various role they played in those days as well as past and present political figures who have contributed towards the development of Effutu Constituency.

A little bit of history tells us that, the name Aboakyer translates as "hunting for game or animal" in the Effutu dialect. The institution of the festival was to commemorate the migration of Simpafo (traditional name given to the people of Winneba).

The people migrated from the north-eastern African town of Timbuktu in the ancient Western Sudan Empire to their present land in the central coast of Ghana. The journey from the north-east to the western part of Africa was led by two brothers.

The people had the believe that a god, whom they called Otu, had protected them from all dangers during their migration and to show their appreciation, the people consulted the custodian of the god, a traditional priest who acted as an intermediary between the people and the god, to ask the god for its preferred sacrifice.

Also, to their surprise, the god asked for a human sacrifice from the royal family. This sacrifice went on for some years but was later stopped as the people were no longer interested in human sacrifices.

It is important to understand that, after the people became tired of human sacrifice as a means of showing appreciation to the god, a further request was made to the god to change the nature of the sacrifice, as they believed that sacrificing royalty could eventually wipe out the royal family.

The god in return asked for type of wild cat to be caught alive and presented to it at its shrine. After the presentation, it was to be beheaded as a sacrifice. This was to be done annually in a form of festival known as Aboakyir.

Before the festival began the people settled the god at a town called Penkye. After the resettlement, the god became known as Penkyi Otu, to signify the final home for the god.

To mark the festival, the people sought out the wild cat, as had been prescribed. Many lives were lost in the process as the animal was to be captured live and transported to Penkye.

The people made a second appeal to Penkyi Otu to provide an alternative to the wild cat. That appeal resulted in the decision to accept a mature bush~buck.

Two hunting groups, the Tuafo (Number one) and Dentsifo (Number two), have since bore the task of capturing the live bush~buck and presenting it to the people at the durbar.

This festival is celebrated in the first week of every "May" and it is a major event in Ghana. It is marked by hunting by the warriors ostensibly to catch a bush~buck or deer with bare hands.

Boos at Akufo-Addo: Someone failed and caused this monumenta...
8 minutes ago