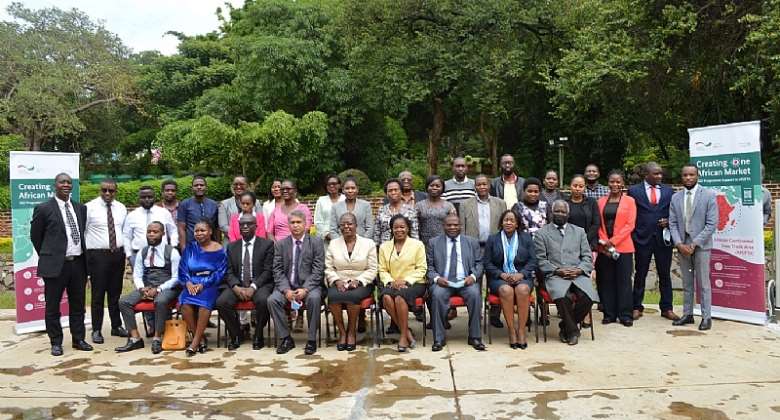 The exercise seeks to build the capacities of the Malawian private sector, representatives of industry associations, chamber of commerce on recently negotiated AfCFTA Rules of Origin.

The workshop is taking place in three major cities of Malawi; Lilongwe, Mzuzu, and Blantyre from 28th February-8th March 2022 with CUTS International Accra providing the training.

Speaking at the opening session of the capacity building workshop in Lilongwe, Malawi on Monday, the West African Regional Director for CUTS Accra, Mr Appiah Kusi Adomako said the private sector and more particularly, SMEs are the drivers of trade across Africa and must be equipped with all protocols and the annexes of AfCFTA to help the maximize the potentials of the free trade agreement.

“The private sector is the driver of the economy across Africa. It must therefore be at the forefront if AfCFTA is to be successfully implemented and beneficial to the people. This is because, without a strong SMEs sector, which can produce and export competitively to other parts of the African continent, African countries would not be able not to take full advantage of the free trade agreement” Mr Adomako added.

Mr Adomako mentioned that findings from a survey conducted by his outfit in Ghana show that less than 13 per cent of SMEs know about the AfCFTA while the remaining are uninformed about the content of the agreement. Hence, the need to embark on this campaign and education on the rules of origin and how it relates to the work of the private sector.

“When it comes to rules of origin, the knowledge level among SMEs is very minimal as it is fairly new among African countries. If not properly understood, it could cause problems for both importers and exporters doing trade under the AfCFTA,” he added.

In her remarks, Mrs Charity Musonzo, the Director of Trade at the Malawi Ministry of Trade said the training is timely and an important one as it will allow the private sector to gain a deeper understanding and equip them with the tools and techniques on the subject of Rules of Origin of the AfCFTA.

“For Malawi, Rules of Origin have been a challenging issue as they do not only constitute a highly technical area but also because their designation and application have not been harmonized across the various regional trade agreements that Malawi is involved in (COMESA, SADC, TFTA, AfCFTA, and WTO). Customs Administration of Rules of Origin has also been a challenge.” She added.

According to her, the lack of such harmony has created a spaghetti bowel effect to the extent that both traders, as well as government officials involved in trade facilitation, are in most cases faced with challenges to understand applicable rules of origin. The lack of full understanding and capacity at Customs Administration has often let third party goods cleared under preferential arrangements denying revenue for Government.

Mrs Musonzo disclosed that her outfit plans to undertake analytical studies, strategy development, position papers development and public-private sector dialogues under the various bilateral and regional free trade agreements and negotiations that Malawi is involved in and their impact on Malawi’s exports.

She mentioned that her Ministry will continue to partner with donor agencies, research organization and the private sector to enhance market access of Malawian products, reducing the trade balance and support the trade agenda for the economic growth and prosperity of the Malawi economy.

Sajeev Nair, Programmes Advisor for CUTS International Lusaka advised the private sector to prioritize sourcing their raw materials from AfCFTA members to enable them benefit fully from the rules of origin.

Members of the private sector lamented their weak capacity to be able to produce and export to other countries and called for support from the Malawian government help retool their operations to enable compete fairly under the AfCFTA.