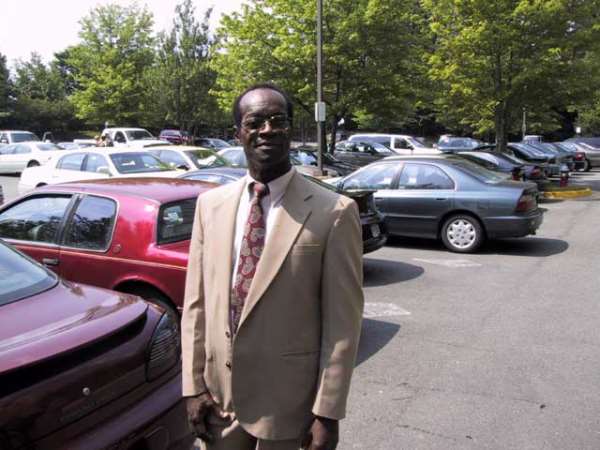 In the interest of disclosure, I must declare that I am not a card-carrying member of the NPP. I do not seek any post from the Kufuor Administration; nor have I received a pesewa from it.

I am motivated to write this in behalf of the supreme interest of Ghana.

When most civilized heads of state step down from power, they retire with dignity and humility into a quiet private life.

They have held an important position in the country and in deference to their service to the nation, they are still provided for by the state with generous pensions, comfortable residences, transportation, security and other benefits. As such, they are expected to comport themselves with dignity and unreserved circumspection as required by protocol, decorum and civility.

Unfortunately, the antics of Flt. Lt. Jerry Rawlings have been a far cry from these standards of civilized behavior expected from a former head of state.

Since stepping down in January 2001, Rawlings has continued to make "ugly noises" and "boom" speeches, hurling threats, intimidation, spewing scurrilous allegations about who murdered the Yaa-Na, the mysterious deaths of 20 women during his tenure and even beating up some of his own NDC supporters.

He treats the institutions of the state with the utmost contempt, refusing to testify or appear before commissions or the police department. Perhaps, he deludes himself into thinking that he is still in power and above the law.

Or that Ghana belongs to him and only him alone. As a delusional individual, he constantly craves attention by engaging in vituperative behavior unbecoming of a former head of state.

Ghanaians are peace-loving people, tolerant and civilized. They abhor violence, beatings, uncouth utterances, vituperative outbursts and undignified behavior. The civilized, humble and dignified approach is more of their preference.

Witness how even the so-called "illiterate and backward chiefs" speak to their people. No traditional chief will remain chief if he talks to his people the way Rawlings talks to Ghanaians. For a former head of state, Rawlings is way out of control and there is a limit to how much insult to their intelligence Ghanaians will tolerate.

The problem, however, is how to deal with such attention-deficit characters. Ignore them and they rave and rant even louder to get attention. Diplomacy does not work with them either because it inflates their ego. Nor does reasoning with them.

They misinterpret civility and decorum as "weaknesses" which give them an air of "invincibility." To deal with such social miscreants, it is best to speak the language they understand: The "buga buga bazooka" language - that is, "you hit me once, BAM! BAM! I hit you twice!" That is the language terrorists understand.

Back in the early 1980s, when Ronald Reagan was the U.S. president, Islamic terrorists in Beirut, Lebanon, seized several American journalists and tourists, holding them as hostages in order to effect a change of U.S. policies in the Middle East. This was during the Cold War.

On April 18, 1983, 63 people were killed, and 120 were injured in a 400-pound suicide truck-bomb attack on the U.S. Embassy in Beirut, Lebanon. The Islamic Jihad claimed responsibility.

On October 23, 1983, simultaneous suicide truck-bomb attacks were made on American and French compounds in Beirut, Lebanon. A 12,000-pound bomb destroyed the U.S. compound, killing 242 Americans, while 58 French troops were killed when a 400-pound device destroyed a French base.

Islamic Jihad also claimed responsibility. On March 16, 1984, the Islamic Jihad kidnapped and later murdered William Buckley in Beirut, Lebanon. Other Americans - journalists and tourists -- not connected to the U.S. Government were seized over a succeeding 2-year period. Among them was Terry Anderson, an AP news reporter.

At first, the Reagan administration tried to reason, negotiate with or appease the terrorists - even trying to trade arms for the release of the hostages ("The Iran-Contra Affair"). It did not work. In the end, one American journalist was brutally hanged, with the gruesome murder captured on video and broadcast worldwide. To show that they were not necessarily anti-West, the Islamic terrorists went and kidnapped 4 Soviet diplomats on September 30, 1985. Know what the Soviets did?

The Kremlin dispatched a team of KGB hard-knocks to Beirut to hunt down the terrorists. They found one, slit his throat and tossed his limp body onto the streets of Beirut. The next day, all but one of the Soviet envoys were released.

As some Ghanaians would say "Some cutlass cut cutlass" but this is more in the genre of "you hit me, I hit you." When dealing with "educated" barbarians, this is the language they understand.

During his 20 year tenure, the regime of Jerry Rawlings terrorized the people of Ghana and committed despicable acts of heinous atrocity. Judges were abducted and murdered. "Dissidents" were labeled and brutalized, exiled or murdered. More than 200 Ghanaians "mysteriously disappeared" during Rawlings' tenure, according to Amnesty International.

He continued to heap abuses, brutalities and barbarous acts on the Ghanaian people right up to the time of the December 2000 elections.

Whenever Rawlings' NDC feared that the outcome of a coming event might not be in its favor, it resorted to sheer terror and violent intimidation of law-abiding citizens. It did not hesitate to unleash its savage thugs against perceived critics of his regime. Here was a pattern of brutalities that characterized the regime's bloodthirsty record since 1993.

" In 1993, security agents splattered human excreta all over the offices of the Ghanaian Chronicle. The following year, on May 12, 1994, "persons believed to be agents of [ruling] P\NDC sneaked into the premises of The Free Press and littered the whole place with human excrement" (The Free Press, June 10-16, 1994; p.7).

" On May 12, 1995, ACDR thugs opened fire on peaceful Kuma Preko demonstrations organized by the AFC, killing four of them. That did not stop the demonstrations. In fact, more people turned out in greater numbers for the subsequent demonstrations in Kumasi, Cape Coast, and other cities. Did the Police arrest any of the killers? Of course not.

" "At an Accra Court on Feb 22, 1996, hired armed thugs were again on hand to terrorize people. This time they started their brazen thuggery from within the courtroom just after circuit Judge Alhaji Nuhu Billa had granted bail to Tommy Thompson, publisher, Eben Quarcoo, editor, both of the Free Press and Nana Kofi Coomson, editor-in-chief of the Ghanaian Chronicle . . .

The thugs, numbering more than 50, and wearing crazy haircuts and dirty T-shirts, filled the courtroom. As soon as Judge Billa granted the journalists bail, the thugs started openly hurling insults and threatening the journalists and their lawyers.

They cornered the journalists and their sympathizers outside the courtroom and attacked them, seizing their cameras and tape recorders and snatching their handbags.

The police fired a number of warning shots to rescue the journalists but as in similar cases, the police has not made any arrests (The African Observer, Feb 29 - Mar 13, 1996; p.2).

" On June 1, 1996, the NDC regime unleashed thugs on peaceful university students demonstrators -- again!! The vehicle that transported the thugs bore registration number ASA 4733 and was decked with NDC colors. The Police did not apprehend the driver and the vehicle. Vincent Assisseh,NDC press secretary, described the beatings as "mild" and warned that "Those who deliberately and recklessly try to show disrespect to the high office of the President should be prepared to bear the consequences of their temerity . . . If the students do not know how to respect authority, we will teach them how to do so, the hard way" (Public Agenda, June 10-17, 1996; front page). Imagine.

" On Tuesday, 25 August 1998, unarmed university students marched peacefully to the Ministry of Education to protest exorbitant fees being heaped upon them. They were confronted by hundreds of riot policemen armed to the teeth, who charged with naked violence, simultaneously spraying hot water on the students, mercilessly beating them with truncheons and opening fire on them.

NDC "machomen" ran amok, beating up people indiscriminately for organizing peaceful demonstrations or just for being anti-NDC. In March 1999, an NPP MP was beaten up in Kumasi. A month later, an NPP meeting in Tema was broken up by "machomen" and members assaulted. Ridge doctors on strike were also assaulted by "machomen."

The year 2000 saw a rash of heinous brutalities heaped on civilians who crossed Rawlings path by accident, no pun intended. Remember the driver of the "tro-tro" who caused the accident on the motorway in October, 2000? He died mysteriously in police custody.

Criminal libel suits became the weapon of choice of a brutal and increasingly discredited regime. When newspapers tried to expose corruption and wrongdoing by NDC government officials, they were slapped with criminal libel suits. "At least 30 libel suits have been filed against the independent press by leading members of the government in what is seen largely as an attempt to stifle freedom of expression," said Kwesi Pratt, Jr. President of the Private Newspaper Publishers Association of Ghana (PRINPAG) (Free Press, 20 December - 2 January 1997, 8). By 1998, libel suits filed by government officials had reached 350.

In August 1998, Kwaku Baako Jnr., editor of The Guide newspaper, and Abdul Harruna Atta, editor of the Statesman, were jailed one month each for contempt by the Court of Appeal in civil libel suits against them. The court also fined their publishers, Western Publications for the Guide and Kinesic Publications for the Statesman, 10 million cedis each for the same offence.

In June 1999, an Accra High Court ordered The Ghanaian Chronicle to pay an unprecedented fine of 42 million cedis ($16,540) for libel against Mr. Edward Salla, Minister of Roads and Transport. It followed an article in the Chronicle entitled "Vetting begins, Minister in a bribery scandal," which alleged that Salia had requested $25,000 from Milicom Ghana, a cell phone operator ((Index on Censorship, July/August 1999; p.134).

Besides heavy fines and intimidation by thugs, the Rawlings regime continued to resort to raw barbarism to suppress freedom of expression. During the early hours of October 2, 2000, unidentified persons smeared human excrement on the entrance of the offices of the Accra bi-weekly, Crusading Guide. That was the third time the Rawlings regime had used human waste as weapon of intimidation against the private press, which came to be known in Ghana as "shit-bombing."

To deal with Rawlings, speak the language he understands. The next time he makes some ugly "boom" noises, dump some human waste in front of his residence. Will that work?

Recall the case of Tony Aidoo. Remember him -- the attack dog of the Rawlings' regime? After the NDC was tossed out of office, he was involved in an altercation with a motorist in a traffic accident.

"Do you know who I am?" bellowed Tony Aidoo.

"So you slapped me?" Tony asked sheepishly. The only language these people understand is the "buga buga bazooka."

George B.N. Ayittey, Ph.D., the writer, a native of Ghana, is a Distinguished Economist at American University and President of The Free Africa Foundation, both in Washington. His new book, Africa Unchained: the Blueprint for Development, will be published by St. Martin's Press this Fall.

Akatsi South NPP Chairman calls for calm ahead of MMDCEs ann...
7 minutes ago

Chereponi: Police deployed to prevent demo against purported...
9 minutes ago